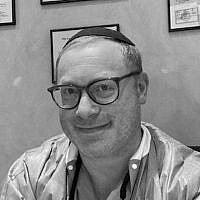 The Blogs
David Gil Bloom
Apply for a Blog
Advertisement
Please note that the posts on The Blogs are contributed by third parties. The opinions, facts and any media content in them are presented solely by the authors, and neither The Times of Israel nor its partners assume any responsibility for them. Please contact us in case of abuse. In case of abuse,
Report this post.

Until I heard of Rav Tendler’s passing, I wasn’t sure I even had a relationship strong enough with someone that I could label “My Rebbe”. Over my academic career, I’ve had countless teachers, rabbaim, and professors, many who were true luminaries as captivating instructors, but outside the classroom, the relationship, as vibrant as it was inside, ended outside. Not so with Rabbi Dr.  Moshe David Tendler ZT”L.

I’m going to be baldly honest; I never sat in Rav Tendler’s shiur. I can’t say I finished a tractate of anything with him. I, like many who partook of Yeshiva University’s extremely time-consuming and rigorous PreMed/Dental/Podiatric/Optometric suite of basic sciences core, enrolled in Bioethics with Rav Tendler. I’m comfortable admitting that amidst calculus, Physics, and Organic Chem, Bioethics had the reputation of being a relative Elysian picnic, rich with tales of Rav Tendler’s adventures with Surgeon General C. Everett Coop, consultation on landmark medical cases, and halachik collabs with (his father-in-law) Rav Moshe Feinstein ZT”L. It was a class you truly could not get anywhere else; 40-odd minutes with a renowned bioethicist, OUR bioethicist. I remember those 46 minutes flying by, capped with a long

queue of students waiting to speak to the rabbi afterwards, with others craning their heads like the students in Rembrandt’s The Anatomy Lecture. They knew that his answers would always be practical, and would change the course of how we all later practiced.

But what made Rav Tendler my rebbe were my interactions with him outside of school, after I had graduated YU. There was zero pretense or condescension on his part, even when my question was inane, or off the mark. Here was a serving Rosh HeYeshiva in a nationally respected institution of Torah, but also the Chairman of the Biology Department at Yeshiva University (and did you know he invented that blue disinfectant that we all grew up with in every barbershop? Now you do!). Despite his Olympic academic stature, he knew his students’ names, and faces, and had a smile for all who approached him, a large grin if they shared his love for the subject.

At the close of my dental school career, I found myself in a common conundrum, one that many fledgling Orthodox Jewish healthcare practitioners face with resignation: I needed to serve as a resident in a hospital; there are Shomer Shabbat programs, and there are non-Shomer Shabbat programs. The ones that allow you to avoid working the Sabbath are adequate, but the ones that ignore Shabbos are far superior in their didactic capability to prepare you for the real-world scenarios you’ll face. Torn, I reached out to Rav Tendler, by phone. That he remembered me by name was remarkable in and of itself- his teaching career spanned decades and many thousands of students, and despite my enthusiasm, I was hardly outstanding. His response to me was completely unexpected. There was zero waffling, or consideration in his verbatim reply: “you owe it to your family and to your patients to get the best training you possibly can. OK?” This was not what I would have expected from a posek. It impacted me tremendously: that simply worded answer was really so complicated. The Rabbi was telling me that, in order to be a practicing Jew, I needed to put the needs of others before my own observance; that, in a way, I had to do a disservice to my own faith in order to better serve my Creator. I never forgot that.

One final anecdote I’d like to share: During my dental training, I ran into a pretty halachically complicated scenario, requiring a great deal of human sensitivity relating to my health, to working in a hospital setting, and to simply being a young married dental student. I needed advice that only someone who was familiar with the world of medicine and halacha could give. In my world, there was only one personality who fit the bill; and I was utterly petrified to call him. My wife, G-d bless her, insisted I call Rav Tendler. You know, like ordering a pizza, just get the number and call, arguably, the world’s leader in medical halacha. Rebbetzin Tendler A”H picked up the phone. This was scary enough. Never mind calling just Rav Tendler; I suddenly remembered that I was now speaking to the daughter or Rav Moshe Feinstein ZT”L. Great. Stammering in my rabbinically-induced star-struckness, I asked if I could speak to the rabbi, and when he came on, I blurted out a description of my situation. His response was probably pretty mundane and methodical to seasoned halachist, but to me, a tour de force in its blend of humanity, practicality, and Torah. He didn’t critique, he simply advised, and with a compassion and openness that made me realize why countless Jews and Non-Jews alike sought this man’s help daily, in areas that were life-and death, taboo, and so very personal.

A light has gone out for not just the Jewish world, but Our World. It’s up to us, his students, to live what he taught, and thereby teach others.

About the Author
David Gil Bloom DMD is a practicing dentist in Boca Raton, FL, where he lives with his family. He is a graduate of Yeshiva College ‘98, and Boston University ‘03.
Comments