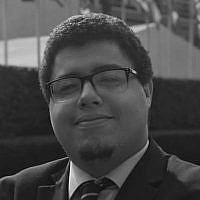 The Blogs
Michael Martinez
Apply for a Blog
Advertisement
Please note that the posts on The Blogs are contributed by third parties. The opinions, facts and any media content in them are presented solely by the authors, and neither The Times of Israel nor its partners assume any responsibility for them. Please contact us in case of abuse. In case of abuse,
Report this post.

I am concerned about the rise in antisemitism across colleges and schools within CUNY, especially at Brooklyn College, my alma mater.

In December 2021, CUNY School of Law’s student government passed a resolution calling on the university to endorse the Boycott, Divestment, and Sanctions campaign and to “end all Israel exchange programs.”

The Boycott, Divestment, and Sanctions (BDS) campaign is anti-intellectual and antisemitic. Its founders have called for the elimination of the State of Israel and the resolutions proposed on campus aim to silence Jewish voices and force Jews to disavow their support and connection to Israel.

Furthermore, CUNY’s Equal Opportunity and Non-Discrimination policies clearly condemn discrimination on the basis of their religion, ethnicity, and national origin, which BDS most certainly does.

Students for Justice in Palestine, a group with chapters across CUNY, are prominent supporters of BDS. Most recently they have held several events peddling antisemitic conspiracy theories; including one at Brooklyn College featuring Lamis Deek,  a prominent anti-Israel lawyer, and activist. During the event, she spread several antisemitic conspiracy theories about the “Zionist regime” and its “influence” on the world.

Another CUNY-wide organization called CUNY4Palestine hosted Mohamed El-Kurd on 3/11. El-Kurd has a documented history of inciting antisemitism, including attempts to justify terror against Israeli civilians, and consistently compares the State of Israel to Nazi Germany.

We must be aware of the harm that divestment resolutions pose to the campus climate at Brooklyn College and across CUNY. Jewish students consistently bear the brunt of anti–Zionist attacks on campus. Slowly, but with increasing severity, insidious forces are working to chip away at Jewish identity in CUNY.

About the Author
Michael is a CAMERA Fellow and studies and researches at the City University of New York. His work on college campuses include Christian-Jewish relations surrounding Israel. He is a former David Project fellow and a former Spring Fellow of the Rimon Movement Project.
Related Topics
Related Posts
Comments