For too many years, Israelis have been told repeatedly that they have no partner on the Palestinian side. They probably never met Maha Abu-Dayyeh, who passed away on the morning of January ninth after a long struggle with cancer, as snowflakes speckled Jerusalem with white. Like many others of her generation, Maha was totally committed to the Palestinian struggle for self-determination. In her view, this vision was also linked to the quest for a just society, magnifying her role as a feminist leader, a social activist and a dedicated supporter of human rights. A woman of the utmost integrity, courage and humanity, throughout her tragically abbreviated career she strove incessantly to improve the situation of those around her and to create a better world for everyone in the region. A glimpse at her all-too-short and wondrous life reignites this hope.

Born and brought up in Beit Jala and Jerusalem, Maha received the finest education at home and abroad. During her formative years, she was imbued with pride in her culture and heritage as well as with a deep sense of humanism and tolerance for the other. The principles of fairness, equality and justice — along with an utter aversion to violence — became an integral part of what she preached and who she was (at home — with her husband Charles Shamas and their children, Raja and Diala — in her community and in her numerous regional and international endeavors).

Like many of her cohorts, Maha Abu-Dayyeh lived her entire adult life in the shadow of the Israeli occupation. Her first job, in the late 1980s, was at the Quaker Center for Legal Aid in Jerusalem, providing assistance to Palestinian detainees during the first intifada. Since then, she was continuously involved in a variety of efforts to achieve Palestinian statehood and to find a peaceful resolution to the conflict with Israel.

Maha understood from the outset that such a quest required forging partnerships with like-minded people on both sides of the Green Line. Over the years, she was instrumental in spearheading several Palestinian-Israeli women’s initiatives (most notably The Jerusalem Link and The International Women’s Commission for a Just and Sustainable Palestinian-Israeli Peace). She never refused an invitation to speak to Israeli and Jewish audiences — however antagonistic — and to eloquently, quietly and unwaveringly, present the case for Palestinian self-determination. In her subdued, passionate, learned and authoritative way, she laid out her value-based vision with clarity, always treating opponents and skeptics alike with respect.

Throughout the years, Maha brought new meaning to the term partner. In her uniquely thoughtful manner, she went out of her way to try to understand what makes Israelis tick, delving deeply into Jewish history and Israeli culture and probing the sources of their fears and aspirations. Without budging an inch on her demand for fair treatment and her insistence on non-violent solutions, she listened and pondered in order to pave new ways to mutual understanding. Endowed with a rare mixture of wisdom and empathy, she combatted ignorance, intolerance, and enmity with large doses of morality and good sense. 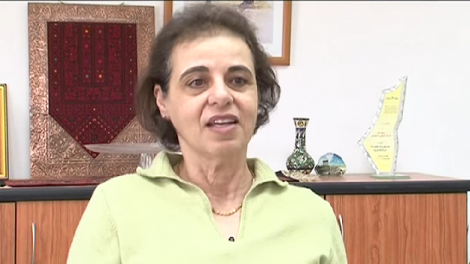 For Maha Abu-Dayyeh, Palestinian freedom was integrally intertwined with liberation from the shackles of bias and bigotry rooted in Palestinian society as well. She was one of the leaders of the Palestinian Women’s Movement, at the forefront of the quest for gender equality in the midst of political subjugation. In 1991 she co-founded the Women’s Center for Legal Aid and Counselling, one of the foremost institutions of Palestinian feminist activism. She championed women’s rights even when challenged by traditional groups and when her personal safety was threatened, building up a professional organization that gives protection and guidance to individual woman, while seeking to ensure more fundamental changes in gender relations in Palestinian society in general.

Maha’s commitment to the protection of women in a climate of ongoing chauvinism continued to her very last day not only at home, but also in the region and internationally (she was the Palestinian representative in AISHA, the Arab regional women’s rights network and was closely involved in numerous international women’s undertakings, including serving as president of Equality Now and participating in numerous UN women’s gatherings). In 2002, she was named Woman of the Year by Ms. Magazine for her tireless work for full equality of women in her own society and for her extraordinary contribution to gender equality globally.

Maha Abu-Dayyeh’s feminism was part and parcel of her humanist mindset — one which viewed women’s rights and human rights as two sides of the same coin. Her sense of the universality of human justice made her into a foremost advocate of international humanitarian law in her own society and a central figure in the growing demand for Israeli accountability within the framework of international human rights conventions. Her insistence on the rule of law knew no boundaries, based as it was on a fierce belief that freedom, justice, law and democracy cannot be separated one from the other. For her, no violation of human rights — by whatever party — should be allowed to pass with impunity. Just as she assumed full responsibility for her own actions, she expected it of others as well — regardless of nationality, religion or political stature.

Maha’s personal qualities were highlighted in everything she undertook. Her absolute honesty came together with a refreshing candor. She never cut corners, but sought common ground wherever possible to promote her values. She was idealistic and strategic in equal measure. And, above all, she placed human beings at the center of her universe. That is why she radiated and invited so much trust.

Many who admired Maha the person, the leader, the feminist and the human rights champion mourn her passing. Some were also lucky enough to have her as a friend: to enjoy her dry wit, her sharp intellect, her sense of fun, her endless patience, her deep understanding and her enveloping warmth. They cherish more than ever the hours of conversation about politics and family, about the state of the world and personal matters, about philosophy and humor. They fondly recall good meals, music and shopping expeditions — while they sadly grieve their early termination. I am one of them: for me she remains the embodiment of the Palestinian partner who many would have us believe does not exist.

It is important to remember that Maha Abu-Dayyeh was never and is not alone. There are many people like Maha: all it takes to find them is a little bit of effort and some political will. Her life represents that of many Palestinian men and women who, like the majority of their Israeli counterparts, continue to believe that despite everything, the only way to achieve a measure of normality and stability — along with the human security these provide — is through working together and finally realizing a just and lasting accommodation between our two peoples. This is her legacy. This is the greatest tribute we can make to her memory and give to all those Israelis and Palestinians who share this vision.