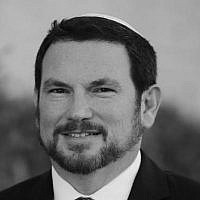 The Blogs
Shlomo Zwickler
Apply for a Blog
Please note that the posts on The Blogs are contributed by third parties. The opinions, facts and any media content in them are presented solely by the authors, and neither The Times of Israel nor its partners assume any responsibility for them. Please contact us in case of abuse. In case of abuse,
Report this post.

For the better part of the past decade, accolades have been resonating about the emergence – no, the arrival – of Israel as a powerful, prosperous and stable country. As an ardent Zionist, proud Jew and Israeli by choice, these pronouncements have brought me ideological content. The claim that Israel is the 8th most powerful military in the world (I’ve read even higher) is sort of understandable and fairly self-evident. Economic stability? There is enormous venture capital pouring into here and we did weather both the post-9/11 decline and subprime recession rather well, with the shekel becoming stable and strong. Scientific development, technology innovation, agricultural mastery. All good and one could go on and on.

Nevertheless, the realist inside has kept me suspect. How, after all, could our little shtetl on the Mediterranean be all that capable? Yes, historically, Jews tend to “punch above their weight.” But still, every time there would be a legitimate news outlet or a research institute analyzing data, ranking us high, I couldn’t help but wonder if the official Israeli PR machine was behind the hype, or how much money some overzealous Jewish organization coughed-up for the placement. Israel is good, Jews do acclimate quickly, and the progress is impressive. Still, top-ten most powerful nations in the world? Ever hear of the “Isra-Bluff”?

Then came the coronavirus.

Chaos strikes the most highly developed “first-world” countries around the globe. Tens of thousands of people dead in Italy, Spain, France, England and the United States. Per-capita deaths are staggering. Yet Israel is a relative sea of tranquility. Suddenly its safer to be in Israel than just about any other part of the developed world.

Israel’s leadership, professional and political, jumped on the proactive bandwagon early on, shutting down air travel and restricting movement quite early. Actually, the Netanyahu Government did not jump on a bandwagon; it “jumped” the car and got the engine started in the first place. The Israelis wrote the book on this one. Some at home and certainly abroad thought it was an overreaction. Yet, as of this writing, Israel’s healthcare system was not overwhelmed by the pandemic nor has its mortality rate pierced that of a typical seasonal flu.

Just take a look at the way Israel handles a coronavirus patient juxtaposed to a person who takes ill in the New York area. In Jerusalem, a woman who reports symptoms doesn’t go to the doctor. She doesn’t go to the hospital to be swabbed. She calls MDA (Magen David Adom) who come to her for the evaluation and test. With a positive result, that woman either goes to hospital, if moderate or worse, or she isolates at home – but first she is given equipment to remotely monitor her vitals and she is contacted by a doctor or nurse every day thereafter to ascertain her condition. If someone can’t self-isolate, the government has converted some of the fancy hotels into corona motels, where the guests are looked after with meals and monitoring. In Israel, once you test positive, you isolate until you test negative – twice. But even before you quarantine, something else happens: The patient is visited by an Epidemiologist to map out everyplace she has been in the previous 14 days (assumed maximum viral incubation period). Anyone who may have been in said locations is then contacted (via “pin-ing” of their cellular icon – a major violation of civil liberties, but that’s another discussion) to go into 14-day isolation themselves, just in case they caught the virus. On top of all that, the woman who tested positive and now in quarantine doesn’t emerge when until she tests negative, twice. In Israel, we got this.

Compare all of that to the experience of a typical coronavirus patient in New York (this is an actual account). Go to the hospital on your own, get swabbed, maybe a chest x-ray, go home. Wait five days for the result, which you have to call to ask for. Quarantine at home. Nobody calls you. Nobody monitors you. When you call a healthcare provider for guidance, you are told that your all set after 72 hours without fever. That’s it. No follow-up test. Not even once. No aggressive epidemiology. No contacting the people you might have exposed or cautionary isolation for them.

Israel, little Israel, with its limited resources and existential threats, has a greater handle on a pandemic than any other OECD member state. For the first time in recallable history, it is safer for a Jew, for any human being, to be in Israel than virtually anywhere else on Planet Earth.

Today we not only celebrate the revival of our ancient language and sovereignty over our ancestral homeland. This Yom Haatzmaut, we also mark the emergence of Israel as a professional, calculated, organized, scientifically and technologically superior nation-state that sets the standard for humanity to emulate. Apparently, those news reports of Israel’s strength and stability are a realization of David Ben Gurion’s age-old reflection: “In Israel, in order to be a realist you must believe in miracles.” Light unto the nations, anyone?

Sure, there is a great deal still to improve, policies to overhaul, an activist judiciary to reign-in and a generally bloated government sector that needs to be skimmed. The healthcare system itself, which is top-notch both in people and equipment, lacks sufficient manpower and gear. But Israel is on a trajectory of ascent unparalleled by any nation, anywhere, at any time. In the course of human history, there has never been a more exciting time to be alive as a Jew and to take part in the realization of the promise that is Israel.

About the Author
Admitted to practice law in Israel, Shlomo Zwickler has been at the forefront of efforts to reclaim and bolster Jewish life in the heart of historic Jerusalem for nearly two decades. Originally from Bensonhurst in Brooklyn, New York, Shlomo and his wife are raising their eight children in the Israeli heartland north of the capital. With hands-on expertise in the public sector, government and law in Jerusalem, Washington and New York, Shlomo brings an informative and eye-opening perspective on politics, history and public policy in Israel and the United States.
Related Topics
Related Posts
Comments