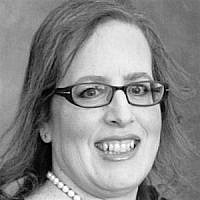 The Blogs
Pearl Adler Saban
Apply for a Blog
Advertisement
Please note that the posts on The Blogs are contributed by third parties. The opinions, facts and any media content in them are presented solely by the authors, and neither The Times of Israel nor its partners assume any responsibility for them. Please contact us in case of abuse. In case of abuse,
Report this post.

The 10th of Tammuz will mark the first yahrzeit of Chaya Mindel bat David Aryeh, aka Martha Klein-Grossman, z”l.

I am an avid Facebooker. About six years ago I received an online friend request. I sometimes get them, but when there is no real connection to the person, or the name doesn’t look familiar, I ignore the request. But I recognized the name Martha Klein-Grossman, having seen it in comment threads on Facebook pages that I frequented. I knew that this woman shared my interest in humor and followed some of the same comedians that I did and the same Kosher foodie pages that I did. I guess that meant she also shared my interest in food! It was clear to me that Martha was bright, and funny, and a warm person, even in such a public forum. I accepted her friend request, and thus began our friendship.

Not only would we comment on each other’s Facebook page, but we constantly wrote offline to one another, especially when we felt we couldn’t post some of our thoughts publicly. Martha and I discovered that we shared similar outlooks on life, religion, people, and family. We educated one another, comforted one another, entertained one another. Like true friends do. It didn’t matter that we didn’t live in the same city, much less in the same country. It didn’t matter that we didn’t see each other or speak to each other on the phone. We had become true friends, not simply “Facebook friends.”

Max Nordau, Zionist leader and co-founder with Theodor Herzl of the World Zionist Organization, claimed, “Those who have wept and laughed together are no longer strangers.” That is so true – the base emotions that traversed our conversations made it clear that Martha and I were no longer strangers; in fact, we felt like friends who had known each other a very long time.

Sadly, Martha was already a widow – a young widow – when I “met” her. Her husband, Mark, had passed away suddenly a couple of years earlier, leaving behind Martha and two young daughters. It was clear that the loss of Mark left a gaping hole in their family, but Martha was very present in her role as mother – and father – to the girls . And from what I learned about her late husband, it was clear to me that he was equally menschlich, and equally funny as Martha.

There was a clarity to our conversations, and honesty. Sometimes there was pain and sadness.  But there was always empathy. And it went both ways.

Most of all, there was humor and lots of word play. Martha loved puns, and we would keep a dialogue going offline or online in our comment threads with bad puns. So bad, they were good. And we smiled and laughed. A lot. At least I know that I did.

I introduced Martha to certain Facebook pages and she did the same for me. We loved to interact on the comment threads of our own FB pages and on others’, because we simply “got” each other. Martha always had my back; if ever a comment thread on my page got nasty, she interjected and set things right. Perhaps that was the lawyer in her, or perhaps it was just the moral goodness of the woman.

A couple of years into our friendship, Martha shared with me that she wasn’t well; however, she didn’t dwell on her illness.  She was fairly private about the details, and instead preferred to shine the spotlight on others and talk about the good people who helped her out in her time of need. When I would drop a line and ask how she was doing, she preferred to turn it around. She checked up on me and my family all the time…lending emotional and moral support, sharing her wit and wisdom.

It is my great regret that I never got to meet Martha. I called her a few summers ago when I was in her neck of the woods, but didn’t reach her and left messages on her answering machine. I called her a few weeks before she died and also had to leave a message on her machine. Then we private messaged each other, and instead of typing, I used a voice feature on my phone to converse. Martha attempted the same. That was the first time I got to hear her voice. That was the only time I got to hear her voice.

When I saw she hadn’t posted on Facebook in several days, I sent her a private message. I was worried about her. I did not hear back. A few days later, I received a message from one of her daughters telling me that her mother had passed away the day before. On Shabbat. Just like a true tzadekket, a righteous female.

I hadn’t known just how advanced her illness was, or that perhaps she had simply taken a turn for the worse. My heart was heavy. I had lost a friend. My friend’s children had lost their mother. They were now orphans, having lost both their father and mother. I hurt for them.

I immediately wrote an email to Martha’s daughters, offering my condolences, and reviewing briefly the special friendship I shared with their mother, and the sadness I felt for them.

In the Jewish tradition, when someone dies, a donation is often made in the deceased’s name to a charity of choice, a charity that had some meaning for that person. I mentally cataloged some charities to whom I could make a donation, but just as quickly tossed away the thought.

I knew of something more special, something more meaningful I would do to honor Martha’s memory: I would light an extra candle on Shabbat and Yom Tov.  It seemed the perfect way to honor my fellow Orthodox Jewish friend; I would be adding more light into our home, while casting more light out into the world.

Lighting Shabbat candles is a link in an endless chain; Jewish women have been observing this mitzvah for centuries, bringing a sense of calm and peace into their homes on Friday night, differentiating between the weekday and the holy day of Shabbat. It is a physical light, but moreso, it is a spiritual light. And the stronger the light, the more powerful its effects.

Lighting an extra candle each week, and for each Yom Tov, this past year, has allowed me to think of Martha continually, and to make a bracha for her, while remembering all the light she brought into my life and into the lives of so many people around her, both in real life, and in the virtual world.

May her neshama have an aliyah, and may her memory be for a blessing. Always.

About the Author
Pearl Adler Saban observes the world around her and writes about what she sees -- be it in poetry and essays, Facebook posts, or letters. She is a mother and wife, a daughter and sister -- and a friend.
Related Topics
Related Posts
Comments