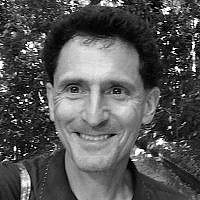 The Blogs
Jeff Pozmantier
Apply for a Blog
Advertisement
Please note that the posts on The Blogs are contributed by third parties. The opinions, facts and any media content in them are presented solely by the authors, and neither The Times of Israel nor its partners assume any responsibility for them. Please contact us in case of abuse. In case of abuse,
Report this post.

Just be a little more patient.

In the summer of 2016, what didn’t happen at Camp David, with John Kerry and his team, or in brief discussions following the horrible murders of three Israelis and one Palestinian and the resulting militant and military responses in mid-2014, will happen at Blue Heron. There are too many anarchists, terrorists, militarists, “sectarianists,” political apologists and lots of other “ists” — yes, even including journalists and columnists — that have too much vested in the Israel-Palestine blame recycling industries to allow peace to break out any sooner.

These industries have been built to survive any and all good news threats, so settling on 2016, the last year of the second Obama administration, and the third year that the Affordable Care Act will have been in full implementation mode, seems more realistic. (Of course, if the Supreme Court is petitioned to rule on whether Middle East peace unfairly targets pro- and anti-Israel interstate commerce or abortion rights, all bets are off.)

Jumpstarting the peace non-negotiations is now less about the issues and more about the people.

The evils that have been taught, learned (and witnessed), often at early ages, have to be unlearned.  Imagine: If your early education includes reading, writing, and advanced settlement, refugee and missile arithmetic, with after school parental homework focused on identifying the other side as terrorists or oppressors, how quickly will you be able to  accept that your  enemy can also be your neighbor — albeit the one who may still occasionally conduct raids or lob missiles at odd hours?

Politicians, militant groups and countries who are reflexively anti-Israel or anti-Jewish  will also need time to recalibrate their hatred and focus on other scapegoats. But the  Middle East confirmation bias epidemic  has become so widespread that eradicating  it won’t be easy. It will be hard to convince infected populations that the real existential threat is now that person looking back in the mirror, the one who sees their past as the only possible future.

But mark it down: 2016 is when a peace agreement will be reached. There, in idyllic Martha’s Vineyard, at  Blue Heron Farm, a 28 acre retreat owned by Lord Norman Foster, the British designer of Hebrew University’s Brain Sciences Center, Obama will once again enjoy a vacation with his family, but this time he will add Middle East peace to his agenda.

Those promised lands will feature Palestinian control of approximately 96 percent of the West Bank, with the  large settlement blocs  remaining under Israeli control. Some Palestinian land will be leased to Israel under a long-term lease. Bypass roads will be built to help ensure contiguous travel between Palestinian and Israeli areas.

Jerusalem will be divided into eastern (Palestinian) and western (Israeli) sectors with international forces — including Israel’s own military for the first five years — providing security there, at religious sites, and at the Jordanian border. Timelines will be established for both  a gradual transfer of  West Bank settlers back into Israel and a diminishing Israeli West Bank security presence.

While Israeli settlers will be permitted to remain in Palestine, the generous compensation and housing contributions announced by Israel will be expected to encourage virtually all of the settlers to move. Palestine will have its own police force, but not  its own military. Israel will also agree to a formula to compensate Palestinian “refugees” and their descendants and admit up to 10,000 over a ten year period, subject to a security screen. As part of the agreement, the Arab League will announce a broader peace agreement with Israel which will include compensation for Jewish refugees who were forced to leave Arab countries.

Now that was easy wasn’t it?

So you ask: Why has it taken generations of Israeli, Arab and Palestinian leaders eight decades of off and on (mostly off) negotiating?

So I answer:  Perhaps for many leaders in the ersatz leaders’ club, an uncomfortable stasis has always trumped the risk of venturing into what they see as a politically scary abyss that only seems to deepen with each passing  missile, bomb, and settlement.

Yet, Israel’s economy tanked in late 2014 and 2015 and a center-left bloc  rose to power in a special election called in late 2015. The Israeli public  became much less enamored with Netanyahu as unemployment and inflation grew, numerous reports indicated that the Obama administration had grown increasingly estranged, and key American Jewish leaders began to publicly express dissatisfaction with Israel’s policies — particularly ones that were seen as discriminating against women, the Reform and Conservative movements, and Palestinians.

With the Iran threat lessened in early 2015 — Russia was instrumental in getting Iran to agree to stricter nuclear weapon controls, including a U.N.-led inspection regime — the Israeli public became much more internally focused.

Netanyahu was also  reported to be shocked when  his 2015 Congressional address (a.k.a. history lesson)  was met with polite silence instead of the usual standing ovations. After J Street’s 2015 Washington convention almost matched AIPAC’s in size, and AIPAC featured several Israeli NGO and Palestinian speakers, Netanyahu panicked. Hoping to secure his political base and gain bargaining leverage, he called an early election — a miscalculation that cost him his job.

Fortuitously, Hamas and Fatah, who had formally united under the State of Palestine umbrella in early 2015, adopted a new charter recognizing Israel and all past Israeli-Palestinian agreements, and forswearing  violence.  While missile launches into Israel by radical Palestinian groups didn’t immediately stop and Israel still conducted infrequent Gaza targeted assassinations, both Israeli and Palestinian leaders began to see these actions as exceptions to an overall improving environment.

All of this left an opening for Obama to reengage with Israeli  and Palestinian leaders he felt were finally motivated to not only negotiate, but to actually reach a peace agreement.

Maybe all Palestinians and Israelis ever needed was a Passover and Ramadan-celebrating President, freed from election constraints and willing to push his own  “endorsed” plan —  referred to euphemistically by some commentators as the U.S. TAKE IT OR WE LEAVE PLAN, a plan no less or more radical than any plan both sides had already largely agreed to in previous years. Plus, this plan offered the added kicker of various U.S security and financial guarantees and the full support of the Arab League, who, while historically largely ineffectual, was now  a key player.

This vision is, no doubt, more inciteful than insightful to those who prefer to believe that it is always  “their” — you fill in the “their” blank — fault.  But there will always be a “their” as long as the world’s worst negotiation continues. We are now at Day 24,158.  But why count days when we should be counting generations? (By the way, that wasn’t a rhetorical question. For fans of precision, go to the www.bumpspot.com website to get the negotiation length down to the hours, minutes and seconds.)

The 2016 final plan was largely drafted decades ago and was a modestly changed version of the one Mahmoud Abbas and Israeli Prime Minister Ehud Olmert  last discussed before they were swept up  in the Middle East’s  infectious anti-leadership/lost election epidemic back in 2008. (Olmert also caught the indictment flu in 2009, but the symptoms manifested in 2008 and weakened his negotiating position.)

It took far too long, but by 2016, reaching a peace agreement was seen as the least risky option. As Obama famously commented to Oprah Winfrey on OWN, now the second largest cable network, “After over 100 years, my Cubs finally won the World Series. That should give us all great hope for the Palestinian-Israeli future: Neither side will need to overcome the goat’s curse that gave the Cubs so much grief. Palestinians and Israelis will just need to work harder to overcome each other’s grief.  It’s all in their own hands. And while there’s no telling how long it will be before the Cubs win again, I see every reason for the world to expect many Palestinian-Israeli joint victories in the future.”

About the Author
Jeff Pozmantier is a leader within the Texas and national Jewish community and currently serves on local Hillel and AJC Boards and J Street's Finance Committee. He also participates in a Jewish-Presbyterian dialogue and as a fundraiser for Hand in Hand Schools ---Israel's only integrated, bilingual schools where Jewish and Arab children are educated together. Jeff is also the developer of Bumpspot, a unique website that advocates for Israel to take specific, proactive steps that will lead to a two-state solution.
Comments