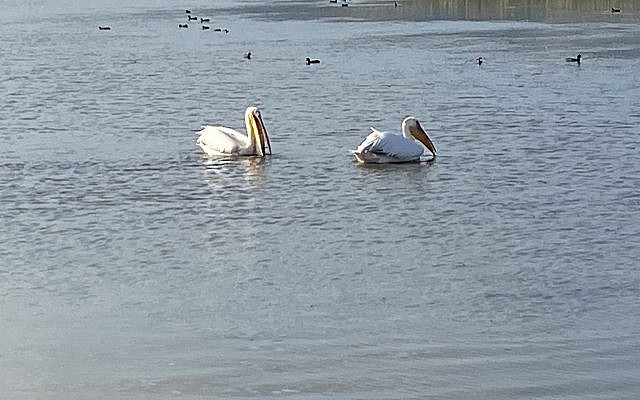 The second coronavirus lockdown has just ended, and the third one can already be seen in the offing. So anyone with a yen for a change of atmosphere and landscape had better utilise the opportunity to take to the open road, and get out of the house.

So hubby and I decided to make for the north of Israel, to the Hula wetlands or lake area, since at this time of the year it serves as a stop-over and resting place for many migratory birds making their way from Europe to Africa for the winter. Israel’s location, between the Mediterranean Sea to the west and the arid Arabian desert to the eest, has made it the preferred flight path for millions of birds migrating from their summer sojourn in Europe to Africa’s warm winter.

Our friends in central France have recently reported sighting and hearing the flocks of cranes (grue) overhead on their way to warmer climes. For those agricultural communities this presages the change of the seasons, and plays an important role in their life. Here in Israel the arrival of the birds has been less welcome in the past, as they tend to eat the fish in kibbutz fishponds and the grain in fields. However, the JNF, which manages, the area of the Hula, has seen to it that the lakes in the area are stocked with fish and grain is put out for the birds, thus enticing them to prefer that venue.

The history of the Hula region is interesting in itself. Set in the low-lying area between the Golan Height and Upper Galilee, for thousands of years it has been a site where human habitation has been sparse. The marshy terrain served as a fertile breeding ground for insects, so that malaria and other diseases were prevalent, causing high death rates among human inhabitants of the region. The presence of water-fowl and other animal denizens made it an ideal hunting-ground. The local inhabitants cultivated rice and wove the indigenous reeds into matting which was used for constructing and furnishing their accommodation. Remains of human habitation dating back thousands of years have been found in the area.

Jewish settlement in the area began in 1883 with the First Aliya, when Yesud HaMa’ala was established on the western shore of the lake. In 1948 there were 35 villages in the Hula Valley, 12 of them Jewish and 23 Arab.

In the early 1950s Israel’s government invested considerable efforts in draining the marshes in order to use the reclaimed land for agriculture. This turned out to be less than successful, as water containing chemical fertilizers served to pollute nearby Lake Tiberias while the reclaimed soil became dry and infertile. Eventually, environmental concerns prevailed, the wetlands were restored to their original state, and the JNF established the Hula National Lake Park as an area where visitors can come and enjoy the bird life.

And so a couple of days ago, ensconced in a golf buggy, hubby and I drove along the eight-kilometer-long path, passing lakes and open areas where birds of all sizes and kinds could be seen and heard. We particularly enjoyed the sight of pelicans fishing in pairs in one of the lakes, and the cranes flying from one feeding-ground to another, or landing near us on ground that was dry. Cranes seem to be much smaller on the ground than when they are flying in formation overhead.

The weather was perfect, the sight of the land, the mountains and the beauty of the region were invigorating and it was good to get out into the open, breathe the fresh air, and feel that we were communing with nature once more.