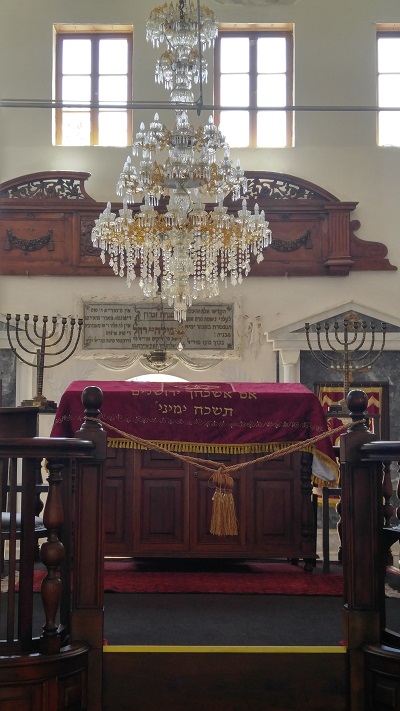 On a narrow alleyway off the main pedestrian thoroughfare in the Old Town of Rhodes, a set of steps leads up to an unpretentious doorway opening to a historic building and a small shaded courtyard. This is Kahal Shalom, the sole remaining synagogue on a Greek island which was once home to 4,000 Jews. Now serving as a museum, and only very occasionally for services, Kahal Shalom offers a welcome respite from the touristy hustle and bustle in the nearby streets, as well as a fascinating immersion into the story of one Greek Jewish community, its history and culture.

My wife and I visited Kahal Shalom on our recent visit to Rhodes, a family trip which offered something suitable for all generations: beaches, a waterpark, shopping, a boat ride, an exploration of picturesque villages, good dining, nightclubs, and a fair amount of ouzo. On one day though, we left the children and grandchildren at the hotel pool and made an additional trip to the Old Town, with Kahal Shalom as the focus of our visit.

There were once six synagogues in the Jewish Quarter of Rhodes, known as La Juderia. Kahal Shalom, with its typical Sephardic interior, was built in 1577. The sanctuary has a raised, wooden platform—the bimah for Torah reading—in its center; the tiled floor is patterned in black and white geometric designs. 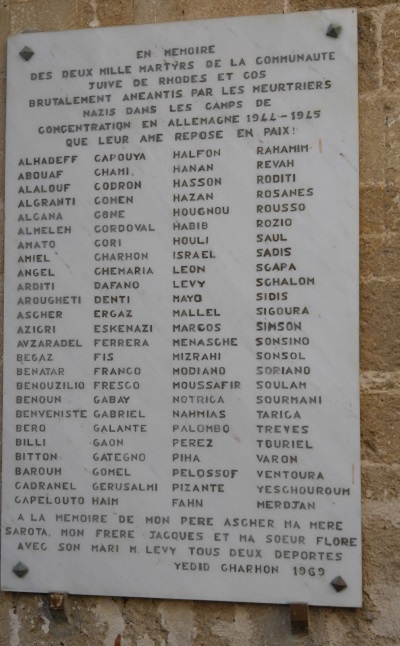 Although the Jewish presence in Rhodes dates back to ancient times, it grew significantly after the expulsion of Jews from Spain and members of the community spoke Ladino. A balcony for women was added to the Kahal Shalom synagogue in the 1930s, when the community was at its height.

After the island’s Italian governor introduced anti-Jewish laws in September 1938, more than 2,000 Jews fled from Rhodes. The Germans occupied Rhodes in 1944, leading to the deportation of the remaining 1,673 Jews to Auschwitz. Only 150 survived. Near the synagogue’s entrance there is a plaque listing the family names of the Jews who lost their lives in the Holocaust. 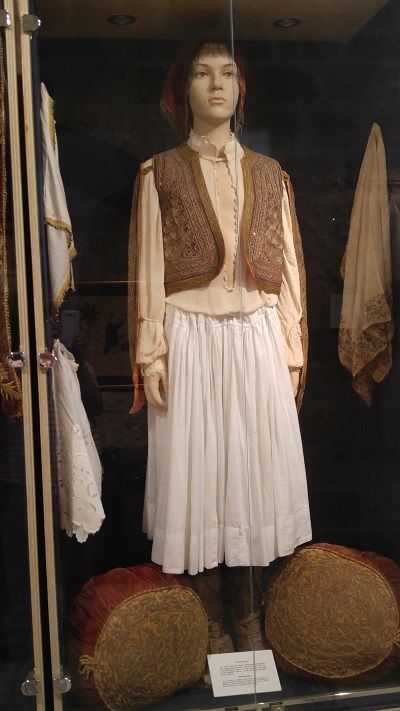 The Rhodes Jewish Museum, established in 1997, exhibits photographs depicting life in the community, as well as explanations of Jewish culture and religious traditions. There are mannequins dressed in garments typically worn by the Jews of Rhodes, including a bridal gown. The story of Jewish life, and its tragic history during the Holocaust, is tastefully presented.

A visit to the museum will be educational for non-Jewish tourists, while Jewish visitors will be presented with a living memorial to the community that once played an important part in the island’s history. It’s hard to imagine that all the shops facing one of the Old Town’s main squares were once Jewish-owned businesses. Today there are only a handful of Jews living in Rhodes.

My wife and I came away from our visit to the oldest surviving synagogue building in Greece and to the adjacent museum with a feeling that we had witnessed a living memorial to a once-vibrant Jewish community, a community whose history and culture should not be forgotten

The Rhodes Jewish Museum and synagogue complex is open from 10am-3pm, April through November 1st. It is closed on Saturdays. During the winter months visits can be arranged in advance. The entrance fee is 4 euros.