Every Pesach we read the story of Yetziat Mitzrayim. But have you ever imagined it from the perspective of someone who experienced it? Imagine if we could…

He was born in tumultuous times when hope and despair traded places frequently. Everyday life was long, oppressive and laborious. Being born male, there was no public celebration of his birth, but surreptitiousness and concealment. He was rocked to sleep with whispered lullabies, lying in his compact cot, in the shadows, in the farthest corner of the one-room abode. And, when there was a knock on the door, it became dark, as the lid of his cot – disguised as a box, was lowered and closed. He quickly got used to not feeling afraid, preferring to take comfort from the thin line of light which crept between the lid and the box.

What he loved most was the feel of his cheek on the soft cushion of his mother’s breast as he sat in her lap, with her secure arms around him. He would close his eyes and breathe in the scent of her hair, lulled by the rhythm of her breathing. His father would lean in and gently ruffle the soft hair on his head and whisper to him in a deep voice which seemed to resonate in his body like sub-sonic ripples.

There was one night though when while lying in his mother’s lap in the same position as he was used to, it didn’t feel the same. She clutched him tighter and her rocking was sharp and nervous. His father’s voice was urgent. Something was happening. There was a knock at the door, but instead of being placed in his cot and having the lid closed, his mother stood and clutched him tighter. She tied him to her back with a shawl and she bent to pick up her belongings as a stranger urged them to move faster. Then he felt the cold night air on his face as they hurried out of their abode and joined a throng of other people, moving like a sea of humanity through the narrow alleys between their houses. His eyes wide, he saw people – so many people – half running, in a barely controlled panic, but with an electric sense of excitement as they jostled and moved together into the darkness, past the last houses, and into an open space.

The echo of thousands of footsteps on cobblestones changed to a shuffling sound, as the dry smell of dust rose and filled his nostrils. He bobbed up and down on his mother’s back, staring at the twinkling stars, fascinated by this new experience, even as they were pushed and hurried along into the darkness, snaking through the dunes. With his head held sideways and his cheek on her back, he saw people around him breathing heavily, their faces pushed forward, looking straight ahead, with expressions of apprehension etched on their cheeks, but with a determined set to their mouths.

After some hours when the black sky slowly became pink, and the dry air became humid and moist, fear and panic spread among the throng. A loud rumbling sound got louder and the ground seemed to shake, like a rolling tidal wave beneath the sea of yellow-brown sand. They were pushed to the water’s edge and the boy felt his mother’s chest heave with sobs. A strange, anxious smell permeated the air. Fear. Panic. Chaos. And then they were moving again in a hurried walk down, past the water’s edge. He saw a moving wall, greenish-brown, strangely liquid but holding shape as they moved along a straight path, on and on for what seemed like forever. He heard a thousand footsteps splashing in shallow puddles. Step, splash. Step, splash. He stared at the wall in awe, hypnotized by how it did not move, even though it was water, while his body bobbed up and down, like a rider on a galloping horse, as they moved along.

At last, they started to ascend a slope and his mother scrambled on her hands and knees to climb on to the hard ground, while he held on with his little hands, almost horizontal on her now sweaty back. Everywhere around him, he saw people crawling up, and then standing up and turning to look back at the way they came, panic and fear on their faces. What they saw was an army of warriors on chariots racing towards them. Then the wall of water seemed to collapse and lose its shape. With the sound like a hundred drums beating low and fast, the body of water filled the space, violently smothering everyone on the path. Cries of despair were quickly extinguished, cut short as they drowned, with only the occasional spear bobbing up to the surface to tell the story of what had been below. And then a cheer rose from the spectators and the boy saw tears of joy and relief on their smiling cheeks and people started hugging and singing. Later in life, he would say that this was his first childhood memory. 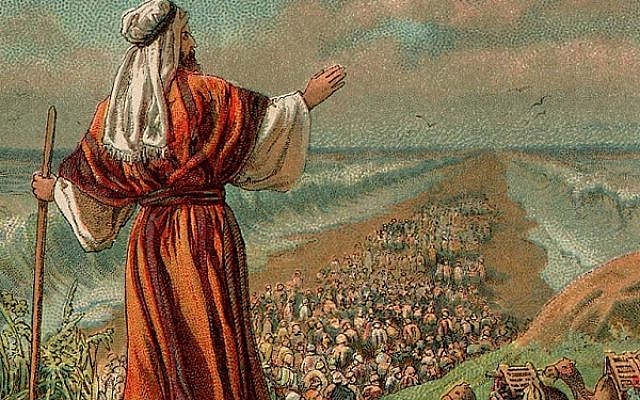 Escape from Egypt (Courtesy of rabbisylviarothschild)

In the ensuing days and months, they traveled mainly by night when the desert air was cool until the sun came up and the heat became too unbearable to continue. When the sun rose, a dark red balloon on the horizon, scouts would be sent ahead to choose a suitable spot to rest for the day. Often they would camp on the leeward side of a mountain or in a gorge, which provided shade from the heat of the day. The boy would lie on his cushion and stare in wonder at the sun’s rays piercing the little holes in the weave of the fabric of the blanket which was a part of their makeshift tent, and he would move his fingers in the ray of light where there was a hole, watching the shadows on the ground from their movement.

At first, he would be strapped to his mother’s back with a shawl while they marched, often lulled to sleep by the rhythm of her buttocks gently rocking him. When he became too heavy to be carried on his mother’s back, he would walk beside his father until he tired. Then his father would place him on the crude cart he had built and pull it along, with the boy sitting on top of their meager possessions.

Occasionally, when they found a good spot, they would stay for longer, using the time for their blisters to heal, to repair their carts and to forge weapons for their self-defense. Then after they had rested, they would start off again, traveling by night and resting by day. 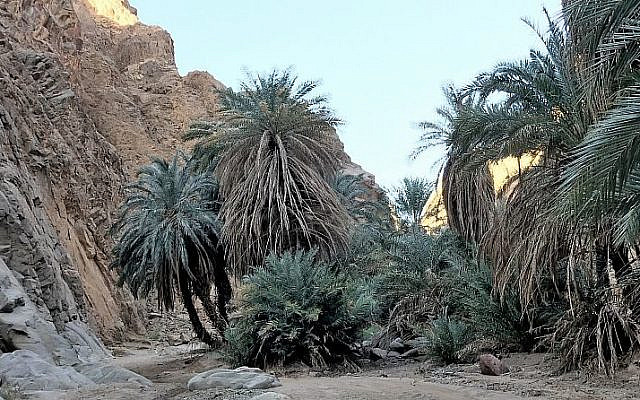 “Occasionally, when they found a good spot, they would stay for longer” – an Oasis in Sinai. (Courtesy of Jabal Maqla)

The boy grew fast; his silky soft hair became an unruly mass of deep, copper curls, which when caught at the right angle would glint in the light like burnished wood. He grew tall and lithe, agile like a mountain goat. He had an engaging smile, a strong jaw, and piercing eyes. He became a leader among his peers.
When the boys turned twelve they began to train to fight. The boy excelled at these exercises, using tactics and technique instead of brute strength. It was at this time that he became a young scout. He would go ahead of the caravan and search for camping sites. His sharp eye for terrain was soon noticed and he was called upon often to perform this task. He enjoyed the responsibility and the freedom of being ahead of the caravan.
It was at one such stop which he had chosen, that there was a flutter of excitement. Moshe their leader, and savior was walking among the tents, talking with his people. The boy was standing beside his father when Moshe approached them, excited to meet the celebrity.

“How f-fare thee, Nun”? Asked Moshe, while taking a measure of the strapping young lad standing beside him. Turning to the youth he said, “I recognize you. You are one of our best scouts. We know we can trust you. What is your name”?

A flustered, Nun answered, his chest bursting with pride, that his son had been noticed.
“This is my son, Hoshaia” (meaning: salvation).
Moshe nodded in appreciation. Then his eyes met the boy’s as he said: “From this day on we will call you Yehoshua”.

About the Author
Paul Mirbach (PEM), made Aliya from South Africa to kibbutz Tuval in 1982 with a garin of Habonim members. Together they built a new kibbutz, transforming rocks and mud into a green oasis in the Gallilee. Paul still lives on Tuval. He calls it his little corner of Paradise.
Related Topics
Related Posts
Paul Mirbach
Comments