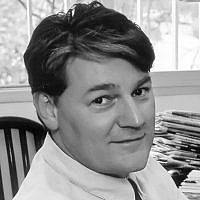 The Blogs
David Parsons
Apply for a Blog
Advertisement
Please note that the posts on The Blogs are contributed by third parties. The opinions, facts and any media content in them are presented solely by the authors, and neither The Times of Israel nor its partners assume any responsibility for them. Please contact us in case of abuse. In case of abuse,
Report this post.

Most people wake up to coffee or their favorite morning news show. But four times in the last eight years now, Israelis have woken up to rocket wars.

Some border incident happens around daybreak and by noon there are hundreds of rockets flying in all directions. It can be quite dizzying!

But you do not just wake up to a rocket war. It takes a lot of time and money and manpower and material and expertise to build up such a large rocket arsenal as that now possessed by Hamas. This did not happen overnight! It had to be planned and implemented over a long period of time.

So there is an extensive background behind this latest rocket war between Hamas and Israel. And the explanation for the current hostilities does not begin with the three Jewish yeshiva students kidnapped and killed by a Hebron terror cell in June. That was certainly a spark, but the real cause can be traced all the way back to the Iran-Iraq War in the 1980s.

The bloody conflict between Saddam’s battalions and Khomeini’s columns lasted eight long years and basically ended in a stalemate. But as with most wars, new tactics and weaponry were introduced and hard lessons were learned, to be studied and applied in the next war.

Two new wrinkles came out of that Iran-Iraq stand-off which are fueling today’s hostilities in and around Gaza.

The march of martyrs

First, Iran started sending indoctrinated soldiers on suicide missions for the sake of Allah. The ‘soldiers’ in this case were waves of young boys promised a harem of virgins in paradise for sweeping through Iraqi mine fields with their bare feet.

Iran swiftly exported this new/old tactic of martyrdom operations to Lebanon, as demonstrated by the driver who plowed his explosives-laden truck into the US Marine barracks in October 1983, killing 241 American servicemen. In doing so, Tehran passed the practice on to its Shi’ite proxy militia in Lebanon, Hezbollah, who would later school Hamas on its virtues when some 400 operatives of the Palestinian terror faction were temporarily deported to south Lebanon in December 1992.

The day the Oslo Accords were signed the following September, the deal required Israel — at the PLO’s insistence — to take back in the Hamas deportees. Within a few short years, Oslo would begin collapsing under the carnage wrought by the march of Palestinian suicide bombers.

Israel finally found ways to confront this threat, but Hamas still employs the tactic in other ways. The population of Gaza today is either brainwashed into viewing death for an Islamic Palestine as life’s highest aspiration, or they are held hostage by those who want to force such martyrdom upon them.

Truth be told, most Gazans do not want to serve as human shields to protect Hamas cadres and their military assets. But these poor folks are powerless to prevent it. And how, pray tell, is Israel supposed to distinguish between the willing and the coerced human shields from 5000 feet overhead?

Terror from the sky

The second innovation of the Iran-Iraq war involved a new/old weapon of mass terror — the ballistic missile. This ‘discovery’ was not made in the Revolutionary Guards’ R&D labs. Instead, it was learned the hard way when Saddam Hussein decided one day to start randomly lobbing his quiver of Russian-made Scud missiles at Iran’s major cities.

Some initially scoffed at the idea of using a weapon designed to target an enemy’s military bases on non-threatening civilians hundreds of miles from the battlefront. But the impact on the Iranian people was devastating, as the Scuds sowed panic and fear in Tehran and other population centers. The national morale sank and Iran was soon seeking a way out of the conflict.

After the war, the Ayatollahs decided they needed this terror weapon in their own arsenal — and in particular to deploy it in their religiously-driven campaign to eliminate Israel. So they started developing their Shihab series of medium-range ballistic missiles to threaten Israel from afar, plus an array of shorter-range rockets that were then delivered to Hezbollah in Lebanon to deploy along Israel’s northern front.

Iran’s thinking involved a move away from confronting Israel with conventional armed forces, since Israel had defeated all such Arab foes over its first three decades by always taking the fight to the enemy’s territory. Rather, Tehran sought to bypass the traditional order of battle against IDF forces and hit straight at Israel’s civilian heartland.

In this strategy’s first real test, Hezbollah used its lethal rocket armory with devastating effect in the Second Lebanon War of summer 2006. In that 34-day conflict, more than 4,000 rockets were fired into northern Israel, keeping over one million civilians huddled in bomb shelters for more than a month during the heat of summer.

Many of the rockets were Syrian-made Grads with extra-lethal fragmentation warheads – a poor man’s cluster bomb meant to rip through human flesh. The casualty count mounted to 165 Israelis dead, including over 40 civilians. The confrontation ended in a draw, but Hezbollah’s popularity soared in the Arab world for striking terror in Israel’s suddenly vulnerable homeland.

With its rocket caches somewhat depleted, Hezbollah has used effective weapons smuggling operations ever since to rebuild its arsenal now to over 150,000 rockets and missiles of various ranges – despite UN Security Council ban on this very activity. This represents a larger weapons stockpile than is possessed by most nations in the world.

Meantime, Hamas also became a major client of Iran in the late 1990s after its political bureau was evicted from Amman and found a new home in Damascus, another ally of Tehran. The Revolutionary Guards began funneling missiles and launchers into Gaza, and helped Hamas develop its own rocket manufacturing capabilities. In pursuing this partnership, Iran’s goal was to eventually threaten Israel’s entire civilian population with overlapping firepower from both the north and south using proxy militias entrenched among civilians living close to its borders.

Thus the home-made Kassams began flying across the Gaza border early in the second Palestinian intifada, and their rate increased four-fold following Israel’s Disengagement from Gaza in 2005.

Eager to increase its rocket range, Hamas has made or smuggled in longer-range munitions, such as the J80 and M305 missile series introduced in the recent fighting. The rocket barrages fired by Hamas into central Israel over recent days mark only the third time ever that greater Tel Aviv has come under serious military attack – the others being the 1991 Gulf War and a couple rudimentary Egyptian air sorties in 1948.

Fortunately, Israel was on to the Iranian plans long ago and began developing with American assistance a multi-layered anti-missile defense system which includes the Iron Dome, David’s Sling (nearing deployment), Arrow II and III, Patriot III, advanced radars and other components. For both sides it has been a race – of Iran’s blunt offensive punch against Israel’s defensive genius. And Israel is coming out just ahead of the game.

After stopping the march of suicide bombers in the West Bank, Israel is now hoping to defang the Hamas rocket threat in Gaza. But to effectively deal with this danger may require a risky and prolonged IDF ground incursion into Gaza to root out the rocket factories, and their storage and launch sites – all hidden in tunnels and bunkers, and under homes, mosques, schools and hospitals.

It used to take a lot of time and effort for Hamas to recruit a single suicide bomber, indoctrinate and train them, and then dispatch him (or her) on an unsavory mission. Families had to be paid, minds warped, cowards culled out.

Today, every rocket fired by Hamas is a cheap version of yesterday’s suicide bomber and it bears the indelible stamp ‘Made in Iran.’ And these missiles are launched from among Gazans who are being involuntarily recruited for martyrdom missions as human shields.

Let’s hope the whole world wakes up to this cruel reality.