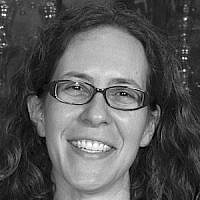 The Blogs
Helaine Denenberg
Apply for a Blog
Please note that the posts on The Blogs are contributed by third parties. The opinions, facts and any media content in them are presented solely by the authors, and neither The Times of Israel nor its partners assume any responsibility for them. Please contact us in case of abuse. In case of abuse,
Report this post.

It was day two of our family’s three-day tour in the Golan. The five of us — my husband, our three boys, and I — had been having a fantastic time. That morning, we had been to Katzrin, the remnants of a Talmudic-period village. And we had moved onto Har Bental, a military lookout with stunning views of the Golan and of Syria.

We’d just had a filling lunch at Coffee Annan (Coffee in the Clouds), a well-air-conditioned cafe on Har Bental—named for Kofi Annan, in the hope that he might visit there. My husband and our guide took the kids outside for some scenic photo ops, as they waited for me to finish in the ladies room (oy, was the line long with a group of European tourists!).

As I left the cafe and looked for my family, I heard a child wailing. Oh my goodness—it was my own child wailing! I spotted my middle son, age 11. He was standing, wrapped in the arms of my husband, gasping for air between his cries. I ran toward them, and my husband and I both tried to calm him, but he was completely inconsolable.

He was so beside himself that he couldn’t speak. He held out his hand for us to see. His entire middle finger was swollen in size, and I could see the small dot in the middle of it, where he’d been stung. Then I thought I heard him say what sounded like “my arm.” And sure enough, on his opposite arm, near his shoulder, was another sting — swelling into a very large welt. Definitely from a wasp.

As we continued to try to comfort our boy, our guide brought him a cup of ice from the cafe. We held ice cubes on each sting site, which seemed to help a bit. But our son couldn’t stop gasping for breath.

I’d never seen him like this. And frankly, that really scared me. I was fairly certain that the gasping was just a panicked response to the pain of the wasp stings — but my gut told me we should seek medical help, just in case there was an issue with his airways.

A few concerned Israeli tourists approached us: “Hakol b’seder?” “Lamah hu bocheh?” (Everything okay? Why is he crying?) — but none appeared to be medical professionals. So our family of 5 piled back into the van, and our guide brought us to a local medical clinic, a short ride away. It’s there that we met Dafna*, a wonderfully sweet nurse who truly saved our day.

Dafna did a quick evaluation of our boy (referring to him as a “yeled chamud” from the start!). His gasp-crying slowed, and soon it stopped entirely.

Dafna spoke slowly, to ensure that I — the slightly-anxious, rusty-on-my-Hebrew mom — could understand all the words. She reassured my husband and me that all of our son’s symptoms were normal and “m’komi, lo systemi” (local, not systemic), and that it’s very common for kids to experience panicked fear after being stung. She told us what signs to watch for that would indicate a true allergic reaction — and what to do in the unlikely event that the situation became worse.

Although her shift was technically over, Dafna allowed all of us to remain in the lobby of the clinic as she finished her administrative work in the office. We continued to ice the swollen sting sites — now with proper ice packs. She wanted to be certain there was no obvious allergic reaction. She chatted with us about where we learned Hebrew, and convinced me that if I continued to practice while in Israel, what I learned as a college student 20-odd years ago would all come back to me.

Before we left, we asked Dafna if we should let our young patient take it a bit easy for the afternoon. We’d planned to visit Nimrod’s Fortress — a Crusader-period castle/site with lots of hiking — as our next stop. She was confident that it was fine for him (and us) to proceed as planned. She said it was such a great site that it would really be a shame to miss it on account of wasp stings. And this is precisely when Dafna saved the day. Nimrod became our kids’ favorite site of the entire 4-week Israel trip.

*Name has been changed for this essay.

About the Author
Helaine Denenberg works in suburban Boston public schools and is a committed volunteer in her community. She, her husband, and three sons are active members of their synagogue.
Related Topics
Related Posts
Comments
Advertisement