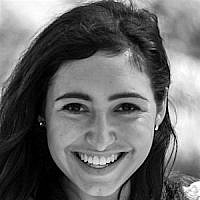 The Jewish High Holidays are a time to reflect upon how to improve ourselves during the coming year, as well as how we might improve our surroundings.

Last week, I was moved by a conversation between my sister and my Dad.  They were in the car together and she asked him how he became religious; as a child, his family was mostly nonobservant.  He expressed that his connection to Judaism began when a religious family in Silver Spring, Maryland, invited him for Passover.  He looked around and saw four generations of a family sitting around one table together and he just knew at that moment, he wanted to experience that for himself.

That was the first time I had heard that story and hearing it made me admire that family who brought him in for a holiday that is all about families.  They welcomed him in and he saw the beauty that Judaism had to offer through them.

Though today, I find myself looking around me and sometimes find it hard to see that welcoming feeling in the Orthodox community in Israel.  For those who are more religious than others, there is often a feeling of superiority given by them to others and a lack of understanding.  If I decided not to fast on a fast day for example, I would have faces made at me.  In addition, I attended Hartman High School, an all-girls school where women lead services, read from the Torah and study Gemara. This often resulted in my being called ‘reformed’, in a demeaning way.  Also, the fact that I was 100% sure that I wanted to draft into the IDF and not do national service, led to many raised eyebrows and lectures on why women should not be in the Army.  I often felt the need to explain myself, to justify how I chose to live my life, and to defend how I practice Judaism.

The same superiority feeling goes for those who are secular as well.  I often found myself apologizing for not being able to eat in a non-kosher restaurant, and for ‘ruining’ the outing.  I was ridiculed for my religious practices and being excited for the different times of the year that seemed special and holy to me.  I was made to feel primitive and simple because I kept my religion as it has been practiced for generations.  I have often felt the need to explain, justify, and defend my practice of Judaism.

Those who were in fact open and understanding were few and far between in my life. I had been taught at home to never feel superior because in addition to my dad’s personal experience, I was raised in an observant home with a history that ran the full spectrum of Jewish observance.  My grandfather was part of the Ultra-Orthodox community and became Modern Orthodox and my Mom had once been a cantor at egalitarian services.  The idea of being open was a big a part of my education at home, but unfortunately not found in other parts of my life.

That changed this past January when I had the honor of participating as an Israeli soldier on a ten-day Birthright trip with Brown University.  I was initially worried about feeling like the odd one out, but had an entirely different experience.  I found a group of people who were interested in my opinion, my way of life, and constantly asking questions from a place of honest curiosity.

The highlight of the trip was the Shabbat experience.   I lit candles with both men and women who were interested in doing so, and led Kabbalat Shabbat for the group.  I did so for the first time without the Orthodox prayer book but with the ‘Birthright praying booklets’ so the group could follow me. I also had multiple discussions about different Shabbat experiences with many people from the group.

I came across people who were welcoming, interested, curious and willing to hear and learn.  Even though the group came to explore Israel and Judaism, the welcoming feeling was something I did not take for granted.

Hearing my Dad’s story brought me back to those emotions during that beautiful Shabbat and made me realize that the welcoming feeling is not something that has to be rare.  I have a wish that this year we will all learn to become more welcoming, and to explain our views while understanding that the person in front of us has entirely different views than ours.   That we will be proud of what we believe in but not be condescending to those who believe differently than us. That we will always have an open ear and heart to listen to other people who want to ask questions and express themselves.  I want my Dad’s story to occur not once in a lifetime but once a week, for all Jews.

I believe that it is completely possible and it all starts with the individual who makes a decision, a decision to be opening and understanding and strive for the ideal of “Kol Yisrael Chaverim”- All of Israel are friends.

About the Author
Netta was born in Silver Spring, Maryland and made Aliyah with her family in 2004. She finished two years of IDF service in April 2016, where she served in the IDF Spokespersons Unit working with American media in Israel such as The New York Times and CNN. She is currently a student at The Hebrew University in Jerusalem majoring in International Relations and Jewish History. She is also the co-founder of SIACH (students from Israel and America CHat), an initiative to create deep conversations and connections between American and Israeli Jewish students
Comments