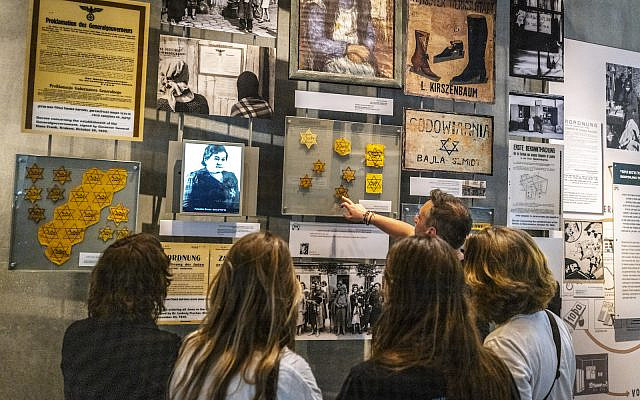 In honor of Holocaust Memorial Day, the Knesset’s education committee visited Yad Vashem this week to see first-hand how they document and teach about the darkest days in Jewish history. As World War II and its horrors fade further into the past and the last of the survivors with their living testimony, leave the stage, Yad Vashem faces unprecedented challenges. Its leadership asked for greater support. They’re right — we need to do more.

Yad Vashem is among Israel’s most venerable institutions. In a country with an obsession for politicizing even the most banal topics and organizations, it is nice to know that the Center represents us all: the definitive and collective voice for remembering the Holocaust and its many lessons.

Yad Vashem, founded in 1953, literally means “a memorial and a name” with the mission impossible of ensuring that none of the 6 million remain nameless. Today some one million people go to Yad Vashem each year, at no charge, making it the second most visited tourist site in the country after the Western Wall. It is typically the first stop for visiting heads of state and dignitaries.

Most of us are familiar with the sprawling Jerusalem campus’s museum and its compelling (and deliberately unsettling) exhibition that unflinchingly presents the Nazis’ genocidal campaign. But it is far more. Besides being a somber place of mourning, Yad Vashem is an immense archive of documents, photographs and artifacts; it is an international school for Holocaust studies that provides direct educational programs to some 200,000 young people, reaching countless more online. It is a significant research center. Most importantly, it is a place that has something to say to Israel and to the world.

For an institution dedicated to chronicling the past, Yad Vashem thinks a lot about its future. Dani Dayan, the organization’s thoughtful chairman, for example, believes that Yad Vashem needs to assume a new role and systematically preserve vestiges of the vast Jewish worlds that were deliberately extirpated. (It turns out, that with the new branding of Tel Aviv’s Diaspora Museum, there is no place in Israel that formally embraces this formidable task.)

In short, Yad Vashem tries to do a lot of things with a 150 million-shekel budget, only a third of which is provided by government funding. And it turns out that present resources are not enough. Far too many Israelis remain unengaged – and go through life never confronting the horrors of the Holocaust and what they mean.

Dayan, a former business entrepreneur and diplomat, offers an ambitious and coherent vision for the institution’s future. He is supported by a dedicated and competent staff. They have many concerns, especially about the steady drop in basic understanding among young people regarding what happened during the Holocaust and why.

This probably reflects today’s fast-paced, social-media-dominated culture, which shortens attention spans and increases superficiality among many young people. They argue that it also reflects the general lack of emphasis on history in the present Israeli educational system. There is much criticism about the newly proposed reform by the Minister of Education that eliminates the High School matriculation history examination (“Bagrut”), which has traditionally included materials associated with World War II and the Holocaust.

I also believe that high school students need to be taught conscientiously about Israeli and global history. But my colleagues on the education committee are not convinced that the proposed reform in high school pedagogical strategy is the problem. The Holocaust is not just another period in history to be included in textbooks and tests. Of course, basic literacy and familiarity with the facts matter in the light of intermittent Holocaust deniers and their egregiously false narratives. But to me, learning about the Holocaust is far more than just learning the details.

There are two core messages that need to be at the heart of a Holocaust curriculum, a curriculum that should start in elementary school and continue through military service. The first is nationalistic: without a country to protect them, Jews were slaughtered. Let it never be said that the Jewish people do not need a state. A core mission of the State of Israel is to make sure that this never happens again.

The second message, however, must be universal: because of our people’s unique and traumatic history, the State of Israel must be especially sensitive to evil — vigilant in intervening to prevent discrimination, abuse of human rights, violence and murder — within and outside of our borders. We must teach our children to identify the monster of intolerance and fight it.

Research in environmental literacy shows that conventional classroom teaching of facts is not enough to change people’s values and behavior. Informal education, it turns out has a better chance of reaching people’s hearts. Yad Vashem has almost seventy years of experience doing this. Their plans to set up teaching centers across the country, enabling them to serve a growing population, make sense to me. But this requires funding. Yad Vashem also needs more resources so it can expand its programs and do a better job of reaching Arab and ultra-Orthodox Israelis with relevant messages.

Public discussion as of late has focused far too much on the inappropriate comparison made by President Volodymyr Zelensky in his address to the Knesset, in equating the war in Ukraine with the Holocaust. The unprovoked aggression and abuse that Vladimir Putin is imposing on his neighbors is horrific. But the dimensions of the killing and Russia’s objectives make it different. Yes, that’s true. But during Holocaust Memorial week, it really is not the point.

We shouldn’t study and present the Holocaust with the goal of providing tools to support a claim that the Jewish people have suffered more than any other nation and therefore, are somehow more morally deserving. Indeed, for me, Zionism is about the Jewish people moving beyond victimhood and eschewing a psychology that sees insidious Antisemitism around every corner. Remembering the Holocaust means inculcating a profound sense of responsibility.

We should do a better job funding Yad Vashem and teaching about the Holocaust to foster a recognition that in a very cruel world, we need to take care of ourselves: When Jews are threatened and when Antisemitism does raise its ugly head, we must respond.

But the lesson can never just be the first half of Hillel, the great rabbi’s, adage: “Im Ayn Ani Li – Me Li”? (If I am not for myself, who will be for me?) The second half is just as critical. “If I am only for myself – what am I?” Teaching the Holocaust means inspiring citizens and visitors to the Jewish state to be more tolerant, compassionate and better respect diversity. It commands us to zealously side with the forces of light in the world and the battle for freedom, fairness and decency. Children who never get to visit Yad Vashem may never get the chance to integrate these critical messages into their lives, so “if not now when?”