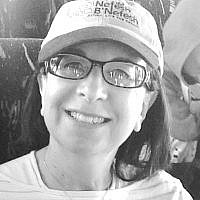 Whenever an Israeli is murdered by a Palestinean terrorist, we in Israel all feel as though we’ve lost a member of our family. Until you actually DO lose a member of your own family. It happened to us yesterday.

The day started out normally. The usual morning rush, and then a special trip to the beach for Taschlich with my Tehillim group. It was a beautiful day–sun shining, bright blue skies and a breeze off the ocean. Some might say it was a perfect day. We talked about how this time, between Rosh Hashana and Yom Kippur, is the time for us to decide how we can improve our relationship with G-d, our families and friends, and help to make the world a better place. We learned about Jonah, and that no matter how hard he tried, he couldn’t hide from G-d and his mission in the world. As I said the Tashlich prayers with the warm water lapping at my ankles, I felt my sins fluttering over the waves. I felt lighter and more ready to go into Yom Kippur.

And then my cell rang. “My cousin was murdred!” were the words my husband cried into the phone. “He was the officer shot in this morning’s terrorist attack!” And with that, the sun got a little darker, and the earth shifted on its axis.

How could it be? This 29 year-old newlywed–gone. This hero who stopped a terror attack at a Jerusalem kindergarten last September–gone. This brother, son and grandson–gone. Yosef Kirma–gone.

Our tradition teaches that someone who saves a life has saved an entire world. But what world was lost by a terrorist’s bullet yesterday? Was it the world that would have given us the one who would have finally brought peace to Israel? We will never know. I pray that this is the last world lost by hatred, but I know that this prayer will not be answered.

How can I know this? Because, as over 1000 mourned, cried and tore their clothes at Yosef’s funeral at the military cemetery on Har Herzl, as a bride eulogized her husband and a father eulogized his son, as the world tipped even more on its axis, Hamas joyfully claimed responsibility for the murder, and Mahmood Abbas’ Fatah party praised the shooting, calling the terrorist a martyr. As Yosef was lowered into his final resting place, Palestinians celebrated and distributed sweets in the streets.

Who was this terrorist who destroyed our world? He was a 39 year-old Israeli citizen who lived in the Jerusalem Arab neighborhood of Silwan. He enjoyed all of the benefits of citizenship–education, medical insurance and more. He could travel wherever he wanted in Israel and make anything he wanted of himself. He chose to make himself a terrorist. He was indicted in January, 2015 for 15 offences of social media incitement to violence and 7 offences of supporting a terror organization. He had also been issued a restraining order from entering the Temple Mount in July. He had been arrested and released several times in the past few weeks.  He was supposed to turn himself in to police yesterday to serve a 4-month sentence for assaulting a police officer and instead went on a cowardly, murderous spree shooting from his car at innocent people waiting for a train or at a red light. How the judge allowed him to walk freely, and expect that he would voluntarily submit to being in prison is beyond understanding.

What can we do now? We can support Yosef’s widow Noy, his parents, grandparents and brothers, as well as the families of other victims of terror. We can support our soldiers and police officers and pray for their safety. We can call for more stringent policing of known terrorists and their associates and demand harsh punishment for anyone known to incite or participate in violence.

May this New Year bring us closer to having peace and security in our borders.

About the Author
Ellen Shemesh made Aliyah from North Miami Beach, FL with her family in 2014. She currently resides in Modiin.
Related Topics
Related Posts
Comments