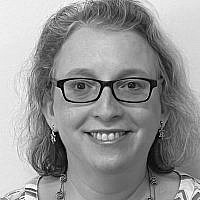 The Blogs
Dawn Goldstein
Chair, Hadassah Amicus Brief Program
Apply for a Blog
Advertisement
Please note that the posts on The Blogs are contributed by third parties. The opinions, facts and any media content in them are presented solely by the authors, and neither The Times of Israel nor its partners assume any responsibility for them. Please contact us in case of abuse. In case of abuse,
Report this post. 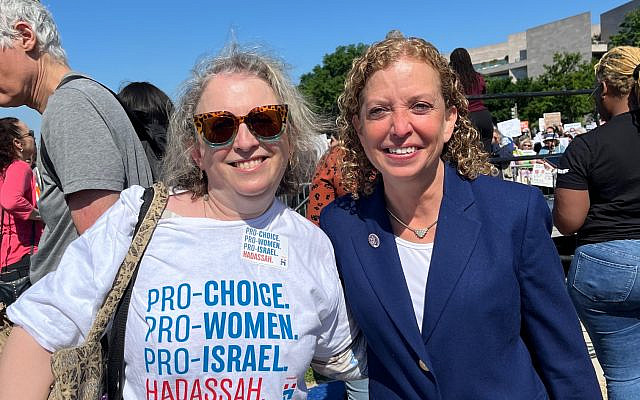 The author with Congresswoman Debbie Wasserman Schultz at the May 17th rally in Washington, DC. Photo courtesy or the author.

When, in early May, someone leaked the draft Supreme Court decision in Dobbs v. Mississippi – the decision that will likely overturn Roe v. Wade – I was horrified but not surprised. Anyone who has paid attention to the Court over the last 10 years could see the writing on the wall. And although we do not yet know what the Supreme Court’s final decision will be, we know we are closer than ever to losing the only federal legal protection for reproductive health American women have ever had.

Despite expecting this terrifying result, seeing the opinion in black and white took my breath away. I thought back to my own family’s history and how it was profoundly changed by that historic 1973 decision. My mother, z”l, had an extremely difficult life. Despite her incredible intelligence, daredevil nature and wonderful sense of humor, she suffered with chronic health issues her entire life. When she became pregnant by her first husband, she did not want to have the baby, but abortion was unlawful in Florida in the early 1960s, so my mother felt that she had no choice but to try to terminate the pregnancy – by jumping up and down a staircase. And at least in part because she was unable to control her own reproductive health, she suffered through three truly terrible marriages.

My mother’s life is a perfect example of why women’s agency over their own bodies and their ability to make health decisions based on medical guidance and personal values should be sacrosanct, not a political issue.

Reproductive freedom is, fundamentally, a health issue essential for women’s health and the health of their families. Largely because of the reproductive health rights granted in Roe and Griswold v. Connecticut, my life has been very different from my mother’s. I did not have to fear the interruption of a pregnancy. I knew that I would be able to finish law school.

As challenging as it can be to balance my job as an attorney with my role as a mother, the life I lead would not have been possible without the right to reproductive autonomy. I have the joy of working at a job I love, working to advance workers’ rights and helping those injured by labor law violations. And as Hadassah’s Amicus Brief Chair, I am able to combine my deep love for Israel and my passion for justice by advising Hadassah about which cases its 300,000 members and supporters should lend their voices.

None of that would be possible in a world without Roe.

The impending release of the Dobbs decision makes me deeply worried about the world my children will inherit. Just last week, the Senate failed to advance the Women’s Health Protection Act of 2022, which would have enshrined women’s reproductive rights in federal law. What’s more, states across the country are enacting a patchwork of restrictions and bans on access to reproductive healthcare. Given those sobering realities, we have to ask ourselves some very troubling questions: Will Congress ban abortion nationwide? Will states and federal agencies have the right to search our mail for abortion pills? Will American women have to travel long distances to obtain, what, for 50 years, has been their inalienable right?

But the fight to protect reproductive freedom is far from over. I am heartened and inspired that Hadassah joined the May 17th Jewish Rally for Abortion Justice in Washington, DC. I and thousands of my fellow Jews and Hadassah members were present to stand up for our freedom. We will not stand idly by and wait for the Supreme Court or state-level judicial systems to decide what is best for women. We will fight for federal legislation that will protect women’s right to choose what is best for them and their families.

Hadassah member, feminist icon and my personal hero, Supreme Court Justice Ruth Bader Ginsburg, z”l, said it best: “The decision whether or not to bear a child is central to a woman’s life, to her well-being and dignity. It is a decision she must make for herself. When government controls that decision for her, she is being treated as less than a fully adult human responsible for her own choices.”

I could not be prouder to be a Hadassah member than I am right now. Hadassah is determined to continue its decades of advocacy for women’s access to reproductive care nationwide. Political leaders from both sides of the aisle should do the same by continuing to work toward national legislation that protects women’s health and freedom. In the meantime, I will pray that my children grow up with the same opportunity to fully control their lives as I have had and my mother, sadly, did not. 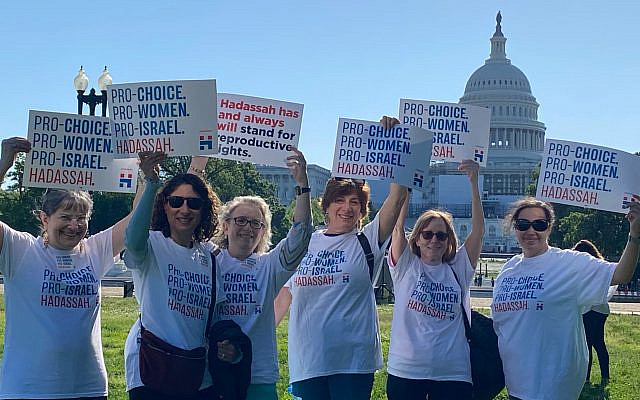 The author with other Hadassah members at the May 17th DC rally. Photo courtesy of the author.
About the Author
Dawn Goldstein is a third-generation Life Member of Hadassah, the chair of Hadassah's Amicus Brief Program and the founder of Hadassah’s Washington, DC, Attorneys Council. She has served as President of the Hadassah Young Professionals group, and as a vice-president for fundraising for the Greater Washington Chapter. In addition, she was selected to attend Hadassah’s Young Women’s Mission to Israel in 1998. Ms. Goldstein is Assistant General Counsel for Contempt, Compliance, and Special Litigation at the National Labor Relations Board. She is a devoted member of Temple Shalom in Chevy Chase, MD. The views expressed in her blog posts are her own and do not represent the organizations with which she is affiliated.
Related Topics
Related Posts
Comments