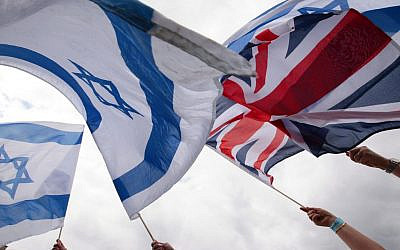 Normally, on Yom Ha-Atzmaut, I fix small Israeli flags to the car windows, wrap myself in a very large flag and drive to work. I make sure to take a lunch break, at a pavement table of  an Israeli restaurant, draped in the flag.  Falafel, Pitta, Hummus, Schug, Olives, Pilpelim and a very sweet Café Turki. Drivers toot, going past. I always celebrate!  Two events I never take for granted. The creation of the State of Israel. And its survival. Like us all, I worry about Israel, but on Yom Ha-Atzmaut, I am ‘Out and Proud!’ This year is no different except for ‘Lockdown.’ No drive through the streets. No restaurant lunch. Well, what about a 5 Km walk in a London park? Wrapped in the very large Israeli flag.

It is probably a good job the wife is at work! No one to fear anti-Israel or anti-Semitic  sentiment might  expose me to danger in a park where half the walkers are from every Middle-Eastern, Balkan and ex Iron Curtain country. Our grown up children do not object so I set off, albeit with a fervent prayer for Hashem’s protection. Just in case!

At the entrance to the park, I meet a friend’s father, an ex chazan, now in his seventies and stooped, who walks there every day.  He looks at me semi-gravely.

“Do you wear that on Yom Yerushalayim?”

The flag billows out behind me. I steam up the grassy hill. I hear no running footsteps behind me, no shouts of abuse. I have had people hit the beflagged car in previous years. The sun shines. People pass me acting as if everyone has a large flag tied round their neck and draped across their back.

Halfway round, a tall, olive skinned man, thirties, pauses, bending to let his Labrador off the leash. I know he is going to turn to me.

“Persian,” I breathe to myself.

We nod as we draw level, both doing the “COVID dance” that ensures two metres separation.

“It’s a wonderful story,” he said, “Very inspiring! What you have created! Your story is amazing! It gives hope to so many”

“It does,” I agree, “Hope to every nation wanting to gain its freedom and independence.”

That of course is the paradox.  We are a nation whose birth in the Exodus was a paean to freedom and liberation, an ode to the end of slavery and the hatred of the other, a statement of the primacy of ethics over religious dogma and nationalist fervour. Now we face the moral, political and practical dilemmas of ‘Annexation.’ However, that is all for another day. Today we celebrate.

“But I was brought up in Wales since I was seven.”

So much for “Anglicisation”! It’s  Celtic cadences I hear!

“You know,” he continues, “You shouldn’t believe what our leaders or state media say reflects what our people think.”

I understand this is true of the young, urban and educated, but not of the rural masses, who are as wedded to their fundamentalism as any Charedi.

“Well here’s hoping your people get their freedom too,” I say, “and we go back to a time when religion just meant being kind.”

I don’t actually know when that time was!

I thank him for his good wishes. We part.

One of our children discussed ‘Annexation’ today. The same child whom I remember, aged 6 or 7, hearing cheers and applause ring out on the early morning radio’s sports report, and turning to me, arms raised, beaming, asking in incredulous delight, “Is there peace in Eretz Yisrael?”

What is it about us and our leaders, on both sides, that leads the same human beings who, when children, think peace is the greatest good, into this intractable adult conflict?

I pass an Israeli couple who call “Yom Ha-Atzmaut Sameach!” clearly thrilled at the open display of support.

I reach the exit, stepping aside to allow an Indian (Sikh?) family of three to go marching past in single file. The parents smile.

Before lock down, I swam most days in Highgate Pond, tramping across Parliament Hill Fields in my kippah and tzitzit. Often I would receive a ‘shalom’ from non-Jewish passers-by. Once, a young man on a group picnic, reclining on the sunlit grass with a bottle of wine,  shouted ‘Shema Yisrael’ in broad Cockney!

For all our difficulties, our story is amazing……and we have more friends than we think!