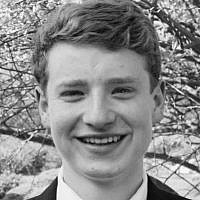 The Blogs
Benjamin Simon
Apply for a Blog
Advertisement
Please note that the posts on The Blogs are contributed by third parties. The opinions, facts and any media content in them are presented solely by the authors, and neither The Times of Israel nor its partners assume any responsibility for them. Please contact us in case of abuse. In case of abuse,
Report this post.

Over the course of the recent wave of Palestinian terrorism, Mahmoud Abbas has revealed his true colors. Last Tuesday’s horrific massacre in Har Nof was the first attack to elicit a condemnation from the president of the Palestinian Authority—and Abbas’ weak denouncement came only after US Secretary of State John Kerry prodded him to do so. Moreover, Abbas has intentionally added fuel to the fire by abetting and extolling the terrorists who commit these atrocities.

Alas, Abu Mazen has once again proven that he is not the partner for peace that the Left erroneously makes him out to be. Those who defend him by claiming that he needs to promote terror in order to maintain his political standing but simultaneously deride Netanyahu for building settlements in order to placate his coalition members are perpetuating a pernicious double standard.

So, why does Abbas believe incitement is in his and his people’s best interests if the immediate consequence is Palestinian suffering?

Because now, more than ever, President Abbas believes the path to Palestinian statehood does not lie in negotiations with Israel—and one need not look far to understand why. Indeed, the European governments that have voted or will vote to unilaterally recognize a Palestinian state that is not contingent upon negotiations with Israel are toxically incentivizing Abbas to buck any form of moderateness and feed the fire of Intifada.

To Abbas, the equation is simple: the more forceful Israel’s military response to terror, the more sympathy he will garner from the international community. This paradigm was always the case, but the European countries’ voting to effectively bypass peace negotiations in recent months has only further pushed the aging Palestinian statesman towards radicalism.

Despite widespread discontent within Israel concerning the recent decisions of Sweden, the United Kingdom, Ireland and Spain to unilaterally recognize a Palestinian state, the parliamentary resolutions were only feebly protested, if at all, by the Obama administration. As a result, President Abbas will continue to take advantage of America’s listlessness and Europe’s encouragement and deliberately agitate the situation. Then, when Kerry restarts negotiations, he will again obsequiously pay lip service to the two-state solution and passionately attempt to convince anyone who will listen of his devotion to discussions and compromise.

To give Abbas the benefit of the doubt, there is good reason why he should not believe in peace negotiations: clearly, Netanyahu and his fellow hawks are also not interested in serious talks. However, if Abu Mazen were truly concerned about the interests of his people instead of advancing his own political agenda, he would not knowingly provoke Israel into a military response that would result in Palestinian suffering.

Furthermore, if Abbas sincerely believes it viable to create a functioning, independent state by bypassing negotiations with Israel, he is mistaken. Firstly, a Palestinian state on paper does not necessarily end Israeli presence in the West Bank nor does it tangibly improve the conditions of Palestinians. Additionally, a unilateral Palestinian state would not only boost the Israeli Right and effectively dissolve any support for the Israeli doves but it would also advance the standing of extremist groups like Hamas, as many Palestinians would perceive violent “resistance” to be the main reason for independence. These repercussions are not only deleterious to the State of Israel but also to the welfare of the Palestinians.

Still, Israel has been able to count on the United States to veto any Palestinian statehood bid in the UN Security Council up until this point. However, with Israeli-American relations in turmoil, even that may not be guaranteed, and considering the impending realignment of the UN Security Council in January 2015, the American veto could potentially be the only hindrance to full UN recognition of a Palestinian state.

And so, with each callous terrorist attack and each Israeli soldier deployed in East Jerusalem, Abbas wins. With every dead Orthodox Rabbi and every dead Palestinian boy, Abbas inches one step closer to his goal. Because while Mahmoud Abbas may say he wants to negotiate, his recent actions have exposed the truth. And with a fleet of bigoted European states behind him and an apathetic American government showing no signs of resistance, President Abbas will not be deterred.

About the Author
Benjamin Simon is a student at Gann Academy, a pluralistic Jewish high school in Waltham, MA. He is an active member of Congregation Shaarei Tefillah (an orthodox synagogue) in Newton, MA and the Newton Centre Minyan (a traditional egalitarian shul). Additionally, Benjamin is a graduate of the Tikvah Summer Institute for High School Students and is the editor-in-chief of his school's newspaper.
Comments