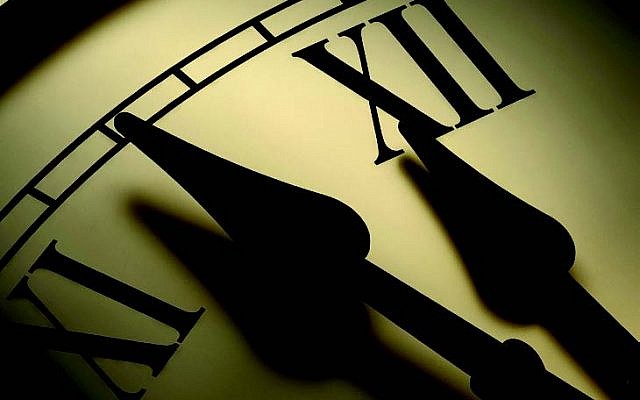 In the original verse, in Hebrew, Moses uses an unusual expression “k’hatzot halayalah.” The normal way of saying would be, “hatzot halailah” – at the midnight. (in Heb. laila means “night,” and hatzot means “the middle,” i.e., the middle of the night, or midnight.) However, the verse says, “k’hatzot halayalah.” Every commentator struggles with the addition of “k” before “hatzot.” Grammatically, the prefix “k” in Heb. is called kaf hadimiyan and signifies a likeness or an approximation. It is usually translated as “like,” “as,” “about,” or “approximately.” The verse, therefore, means, “about the midnight,” or “approximately at the midnight.”

The commentators are puzzled by this translation. Couldn’t Moses predict the precise moment in time when the plague of the firstborns would be visited upon Egypt? The classical commentaries are well known and printed in most traditional editions of the Chumash. This past Shabbat, as I was listening to the reading of the Torah, when this verse was read, my mind took me down the memory lane to my childhood.

I was thirteen-years-old and very interested in science. By that time, I have already decided to become a physicist and was gobbling up popular books on physics one after another.

In one book about quantum mechanics, I read about Plank time. Plank time is an unthinkably small interval in time with 44 zeros after decimal point before the first significant digit in this number. It is thought to be the shortest possible interval of time, beyond which time became meaningless. Similarly, there is Plank length thought to be the smallest length possible. In other words, space and time are not continuous, but granular.

Once my “theory” was developed, I traveled to Moscow to present my work at the Seminar for Theoretical Physics at the Moscow State University. To my disappointment, I was told that what I have developed was a well-known technique called Finite Differences. Nobody, however, attempted to apply it to quantizing spacetime.

My childhood experience with the Plank time suddenly came to mind during the Torah reading this past Shabbat. Moses was telling Pharaoh that the plague of the firstborns would visit upon Egypt approximately at the midnight. Approximately, because time is not infinitely divisible ­– the Plank time set the limit on the smallest time interval. As I explained in the earlier post “It’s the time, stupid!” Moses was the master of time. Did he know, that because of the Plank time, it was impossible to pinpoint the midnight with absolute precision?