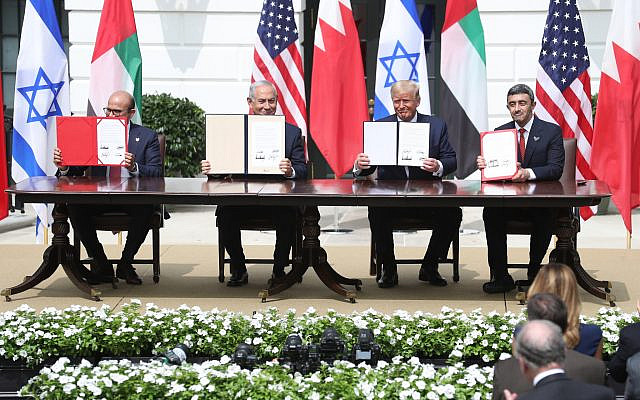 The historic Abraham Accords announced last summer have rightly received global attention for their symbolic importance. The development saw the Jewish State and key actors in the Arab world end hostilities not through security practicality, but through a desire to dialogue and normalise. It is something that many thought might never occur. Amidst the fanfare however, one aspect of the agreement that has been somewhat overlooked is the considerable economic benefits afforded to all involved. In time, the Accords will show that dialogue is a far better route to financial prosperity than hostility ever could be.

It is a widely-held view that the Gulf and Israel took the decision to normalise due to a shared concern about the malign influence of Iran. This is only partly true and fails to take account of the broader, long-term picture. The Gulf states are all too aware of the need for economic diversification, as part of their longer-term stability. Falling oil prices and environmental concerns mean hydrocarbon revenues can’t been seen as reliably as they once were. Israel is a neighbouring state that has become a prosperous, high-tech, innovative economy without dependence on natural resources. It is therefore an obvious place for the Gulf states to look for partnership in developing knowledge-based economic growth.

It shouldn’t be understated how important the new approach signalled by the Abraham Accords can be for bringing greater stability to region characterised by conflict. They have the potential to demonstrate to others that economic prosperity is the reward for setting aside old hostilities. Since their announcement in August, all parties have been keen to press on with ramping up economic cooperation and trade at a rapid rate. Little wonder, considering the Israeli Ministry of Economy estimating £500bn in bi-lateral trade with the UAE as a result of these accords.

In the six months since the accords’ announcement, we have seen no shortage of economic collaboration that is the marker of things to come. Advanced green technology and clean energy innovation is a prominent early example of where Israel and the Gulf see major potential for growth. Only last month, Abu Dhabi’s renewable energy company Masdar announced a significant MoU with EDF Israel to explore renewable energy development and generation opportunities in the Middle East. Collaborations like this between innovative companies like the UAE’s Masdar and Israeli outfits like EDF Israel or Apollo Power offer major promise in turning the region into an advanced clean energy hub.

To some, the new era or normalisation between these states, along with the rumours of further deals with Oman and Saudi Arabia in the pipeline, will primarily be viewed through a security lens. However, it is the economic pay off that will have the longer lasting impact on the region. As the Middle East’s most advanced economies, states like the UAE and Israel dismantling past barriers to cooperation and collaboration will show that the alternative to further conflict and hostility is far more prosperous to all involved. In time, the Abraham Accords will show that the dividend to creating peace is very much financial, as well as diplomatic.

About the Author
Fiyaz is the Founder and Director of Faith Matters, which works on countering extremism, community integration and monitoring hate crime work. He is also the Founder of the national Islamophobia Monitoring Group, Tell MAMA, and was it's Director from 2011-2016. He has worked on supporting better Muslim and Jewish relations for over 17 years.
Comments