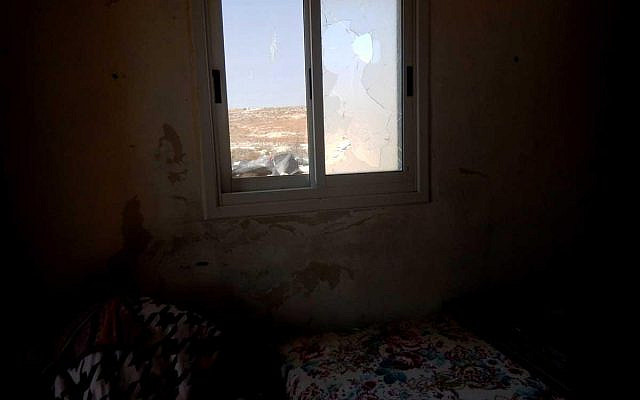 A window in al-Mufaqara smashed by settlers. Photo by Manal al-Ja’bari, B'tselem, with permission

God told Avraham that all the land he could see or walk on was going to belong to him. But that’s not how he saw himself.

Near the beginning of Chayyei Sarah (Gen 23), Avraham enters into delicate negotiations over the purchase of a field in Hebron from Efron the Hittite, which holds a cave where he hopes to bury Sarah.

God promised, a few chapters earlier, to give Avraham all the land from the Nile to the Euphrates. The Hittites also seem eager to recognize Avraham’s rightful place, his belonging to the land, declaring that “you are a prince of God among us…” – with an the emphasis on b’tokheinu, which can even mean “within us.”

Avraham will hear none of that. “Ger v’toshav anokhi imakhem” he says, “I am a stranger and a temporary settler with you all” (Gen 23:4). Disregarding the promise, Avraham begs the Hittites to give him an achuzah – a permanent holding in the land, a purchase (in both senses) that will be irrevocable and witnessed by all present. He then offers full market value for the field, even more, to satisfy the declaration of Efron, “What is a field worth 400 silver shekels between me and you?” (Gen 23:15)

A different Avraham, Avraham Yitzhak Hakohen Kook, chief rabbi of Palestine before the state of Israel came into being, took a similar approach to the holy land:

Since we (the Jewish people) are a “righteous nation, keeping faith,” our conquest [of the land of Israel] can only take place via the path of peace, by means of purchase with money. It [must be] our will to uphold the commandment to “love your neighbor like yourself” not only with individual people, but also with [other] nations. (Ma’amrei Hara’yah, 168)

Rav Kook associates the path of peace with loving one’s neighbor, including one’s non-Jewish neighbor. But Avraham Avinu, our father Abraham, goes one step further, calling himself a stranger. Why?

Maybe he was feeling guilty and displaced because Sarah died without him. But there’s also a grand ethical reason behind his humility and deference.

When God promised to give Avraham all the land, it came along with a vision that Avraham’s descendants would be “strangers in a land not theirs” (Gen 15:13). It seems Avraham immediately took this prophecy to heart: not only does he project the lesson of being strangers onto an image of Egypt of the future, but also onto his immediate present in Canaan. He sees himself as stranger even in the land of God’s promise, and asks to be shown the love due a stranger. He sees his Hittite neighbors as the “people of the land,” recognizing not just that he is a stranger, but that he is in their home (Gen 23:7-13). By doing so, Avraham shows exquisite sensitivity to the same lesson that the Shmita or Sabbatical year is supposed to teach us: “For the land is Mine,” says God, “for you are but strangers and temporary settlers with Me / gerim v’toshavim imadi” (Lev 25:23).

Avraham didn’t lord it over the Hittites or the other nations still living in the land. Avraham never said, to the victor the spoils. After the war of the five kings vs. the four kings in parshat Lekh Lekha, he didn’t take so much as a shoelace, even when the laws of war would have allowed him to take riches beyond measure (Gen 14:23). Nor did he use his military forces to occupy or rule over the people he had saved, as he well could have.

Alas for those of his descendants who seem uninterested in such a vital lesson, so central to Torah, to Judaism, and to justice. Alas for those settlements in the West Bank that steal water and land from their non-Jewish neighbors. Alas for the settlers in Yizhar and Itamar who burn down olive trees because they belong to Palestinian farmers – something explicitly forbidden by the Torah. Alas for Jewish terrorists who infamously firebombed a Palestinian family in 2015 and killed eighteen-month old Ali Dawabsheh and his parents, and alas for their settler sympaticos, whose wedding shtick included stabbing the boy’s picture while they danced. As far as these settlers are concerned, Palestinian farmers and their families are already deprived of rights, as if they were dead. Alas for the settlers of Avigayil in the South Hebron Hills, who attacked Palestinian families of al-Mufaqara in Masafer Yatta over Simchat Torah this year, who destroyed water cisterns and smashed windows, who injured women and men and children. Alas for the settler armed with a knife who, when he couldn’t get to one Palestinian shepherd, stabbed and killed four of his sheep.

Everyone in government condemned the wedding celebrants back in 2015. But this year, after the settler attack in Masafer Yatta, the government came afterwards to destroy water lines there, depriving Palestinian families of their rights and the most basic needs of life. All this in the same week that the government declared six Palestinian human rights groups to be “terrorist.” All this just a handful of miles from where Avraham bought a cave in Hebron, whose name means friendship.

Praise God, Avraham wasn’t an a**hole. But these settlers are far worse than that: murderous fascists carrying out works of destruction.

We say that Avraham’s children can be recognized because they are compassionate people, descendants of compassionate people (Beitzah 32b). Of course there are settlers who fall into that category, who believe in Palestinian rights, who follow Rav Kook’s directive, who pay shiva calls to Palestinian households when they have lost family to violence, who join other Israelis acting as shields to Palestinians and help them harvest olives in the face of extremist settler attacks. (Let us also not forget that the Palestinians are also children of Avraham/Ibrahim.)

Then there are settlers from Yizhar, Itamar, Avigayil, and their like, who by the standard of compassion are no children of Avraham. They should be expelled from the West Bank and then banned permanently from crossing back over the Green Line. Their iniquity is full, it is long time for them to be vomited from the land.

It’s almost the month of Kislev, which means we are in olive harvest season and Chanukah is approaching. You can light your menorah with Palestinian fair-trade olive oil from the West Bank, or olive oil from a Jewish-Arab cooperative in the Galil, and support lighting the path of peace.