A year after the United States brokered Abraham Accords were signed between Israel, United Arab Emirates, Bahrain, and Morocco, the foreign ministers of Israel, US and UAE launched a Joint Economic Forum with India. While the Forum was being established, US and Indian air force jets flew together with Israeli jets over the Negev desert in Israel in the presence of the commander of the UAE air force.

Viewed through a Bible lens, these unprecedented digital age events bring to life the story of Abraham giving birth to both the Jewish and Arab nations through his oldest sons Isaac and Ishmael. Today, Israelis and Emiratis are joining together in peace as brothers.

How does India fit into this biblical picture? Perhaps Indians are heirs of Abraham’s six younger sons named in the Bible as it tells how they went eastward to the lands of the east.

The Joint Economic Form was formed in a meeting between India’s Foreign Minister Dr. Subrahmanyam Jaishankar who was welcomed to Israel by Israel’s Foreign minister Yair Lapid.  They were joined in a videoconference by US Secretary of State Anthony Blinken and UAE Foreign Minister Abdullah Bin Zayed Al Nahyan.

The Indian foreign minister also meet with Israel’s President Isaac Herzog who praised the growth of Israel-India relationships in a range of fields. Herzog emphasized his intention to personally assist in promoting and strengthening ties between the two countries.

Dr. Jaishankar relayed to Israeli Prime Minister Naftali Bennett when they met in Jerusalem an invitation from Indian Prime Mister Narendra Modi for an official visit to India.

Bennett responded, “In the name of the State of Israel, I want to tell you, we love India. We see India as a great friend and expect to broaden relationships between us in all areas.” 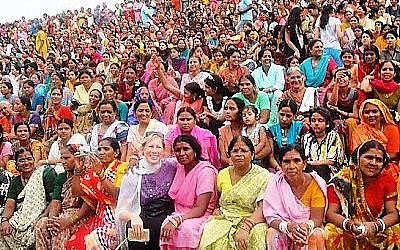 The photo above shows my daughter Iyrit in India. Her husband Dr. Yehiel Lasry is mayor of Ashdod, one of Israel’s largest cities and its major port, former member of Knesset (Israel’s parliament), and Surgeon-General of the Israeli Navy.

Linking India to the Abraham Accords

The Abraham Accords brought Israel and United Arab Emirates together in peace. Its name reflected a digital age reunion of the descendants of Abraham’s sons Isaac and Ishmael who had come together millennia ago to bury their father.

“At a ripe old age he breathed his last and died, and was gathered to his people. His sons Isaac and Ishmael buried him in the cave of Machpelah. (Genesis 25: 8, 9)

Abraham was content because his two sons had come together to be with him when he breathed his last breath.

For seven years, my wife Miriam and I lived in Yeroham in the Negev desert where Israeli and Indian jets are flying together overhead today. It is where Abraham pitched his tent near the spring where Hagar and Ishmael found water. Our son Moshe was born there. Our son Ron and his family continue to live there after four decades. The spring is now called Agam Yerocham, “lake of Divine mercy” in Hebrew, and Be’er Rachma, “well of mercy” in Arabic.

Here’s the story of how India enters the biblical story of Abraham. After Abraham’s wife Sarah the mother of Isaac died, the Bible tells us:

“Abraham had taken another wife, whose name was Keturah, and she bore him Zimran, Jokshan, Medan, Midian, Ishbak, and Shuah.” (Genesis 25: 1, 2)

The foremost biblical commentator Rashi explains that Abraham remarried Hagar, the mother of his son Ishmael. She was given the name Keturah because her deeds were as beautiful as incense (ketoret).

In Genesis 25: 6, we learn that Abraham gave gifts to his six youngest sons and sent them away eastward to the land of the east.

Since “Abraham left everything he owned to Isaac” (Genesis 25: 5), what gifts did he have to give them? He gave them spiritual gifts that they brought with them to the lands of the east, to India. In Hebrew word for “gifts” in the original language of the Bible is matanot akin to the word mantrot (mantras), spiritual roots of religions of the Far East.

More than 500,000 Israelis have visited India in the last 20 years. Among them one finds many who returned enthralled by the country’s culture, religions, food, and music. No doubt, India has great allure for Israelis.