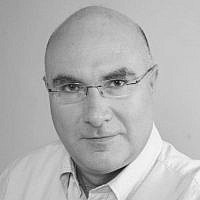 The Blogs
Kobi Michael
Apply for a Blog
Please note that the posts on The Blogs are contributed by third parties. The opinions, facts and any media content in them are presented solely by the authors, and neither The Times of Israel nor its partners assume any responsibility for them. Please contact us in case of abuse. In case of abuse,
Report this post. 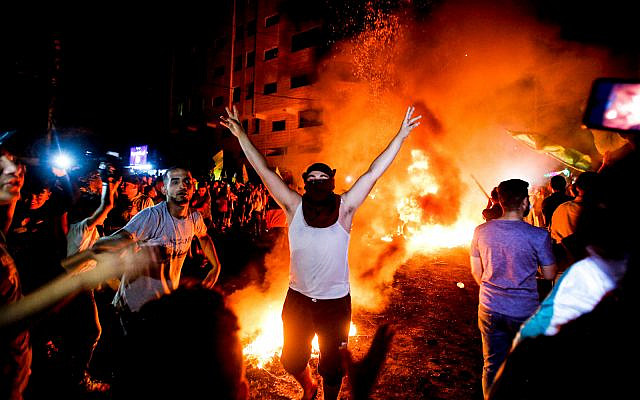 Palestinians protest during an anti-Israel protest over tension in Jerusalem, in Gaza city, April 24, 2021. (Atia Mohammed/Flash90)

With Abu Mazen’s announcement indefinitely delaying the Palestinian legislative elections, it appears the best days are behind the PA President along with the rest of the veteran Fatah Palestinian national leadership and even the Fatah movement itself. Abu Mazen’s irresponsible and predictable decision to call the elections and his decision to cancel them on the pretext that attributes to Israel an inability to hold free elections in East Jerusalem are liable to emerge as one strategic fumble too many, in the wake of which the processes for changing the Palestinian national leadership will accelerate.

The Jerusalem riots resulted from a mix of factors: the Muslim holy month of Ramadan along with shortfalls in Israel Police professionalism and sensitivity surrounding recent events in Silwan and Sheikh Jarrah, all further clouded by “TikTok Terrorism” and the Lehava organization’s displays of hatred and violence. But none of these cut to the heart of the matter.

East Jerusalem was the ladder that enabled a desperate Abu Mazen to climb down from the elections he called, by presidential decree, after reaching understandings with Hamas. In deciding on the elections, Abu Mazen acted with preening irresponsibility, maneuvering himself into a honey trap set for him by Hamas, which agreed — to his surprise, and contrary to its original position — to accept all of his terms for holding the elections. Hamas, which had prepared impressively for the elections and anticipated significant gains and perhaps even victory, was unwilling to provide Abu Mazen with the ladder.

Furthermore, Hamas correctly saw East Jerusalem and the friction between Palestinian youths and the Israel Police as an opportunity to exercise leverage ahead of the election cycle, as a convenient boxing ring in which to lay into Abu Mazen and embarrass him, and as an infrastructure for bolstering its status as the party that is leading the overall Palestinian national struggle as well as the struggle for Jerusalem and its Muslim holy sites. All of this was engineered, on the one hand, by igniting the riots and mobilizing the youths and, on the other, by heating up the southern front through rocket fire and violent protests along the Gaza Strip border fence.

Rocket launches and the violent fence protests are, in their essence, a message to the Palestinian public that boils down to demonstrating an ability and willingness to confront Israel and respond to what is deemed its harm to Palestinian Jerusalem, and at the same time are a message to Abu Mazen about the fecklessness of the Palestinian Authority under his leadership in this regard. The deliberate escalation was also designed to signal to Israel that in Hamas’ view Jerusalem is not outside of the rules of the game, and that, should Israel initiate an escalation of the Jerusalem situation, Hamas will respond from the Gaza Strip.

Hamas felt secure enough to act in this manner because, in its view, doing so did not constitute a change to the rules of the game or a violation of the balance in the standoff with Israel. Via the Egyptians, Hamas relayed messages to Israel about not having any intent to escalate, and it reckoned that Israel’s response would be measured. The organizing logic behind this pattern of conduct remains identical TO WHAT, but Hamas has been making the framework wider and more elastic by permitting itself to allow the launch of 36 rockets in one night because it perceives the limitations on Israel’s room to maneuver and retaliate, both in general and at this specific time, with Israel mired in internal political crisis and when it is clear to it that the Israeli political leadership has no desire for escalation nor for a large-scale operation in the Gaza Strip. Israel’s measured and small-scale response to the rocket salvos is nothing short of a reinforcement of the Hamas perceptions, which serves to shape a very problematic routine whereby, under this same organizing logic, a 36-rocket salvo could become a bigger salvo.

It would be incorrect to explain the East Jerusalem riots as a spontaneous outbreak, but on the other hand, it is important to remember that despite the prominence they were accorded a relatively limited number of youths took part and should not be seen as representing the overall, broader mood among the hundreds of thousands of Palestinian residents of East Jerusalem.

There are accounts of involvement by outside Islamist elements (from Turkey, the Northern Branch of the Islamic Movement and perhaps elsewhere), via social media, in the “ignition” and perhaps even the mobilization of the riots, but there is no lack of other reasons for their outbreak – some of which, to our regret, stem from the unprofessional and perhaps also irresponsible conduct of the Israel Police and of those responsible for it, and in the absence of orderly processes of situation-assessment and decision-making by the political echelon in concert with the professional echelons.

Clearly, Hamas was not sitting on the sidelines and worked in its own way to steer developments in its favor and increase its support in advance of the elections. This stance also strengthens it now that the elections are canceled. The events, like Hamas’s conduct, have expanded the Hamas support base among Palestinian residents of East Jerusalem, but no less so among residents of the West Bank.

Hamas’s clear preference would have been for elections to be held. Elections could have been the key to Hamas’ incorporation in the leadership of the Palestinian Authority, and later on of the PLO, and for establishing a position of influence and mainly legitimacy, at home and abroad, with a view to assisting in its belated and legitimate takeover of the Palestinian system as a whole.

Until the Jerusalem riots broke out, it appeared that Hamas preferred to make a significant gain but not to sweep the elections, so as to avoid the need to head up the PA government vis-a-vis Israel and vis-a-vis the international community.

The Hamas victory in the 2006 elections, which led to the creation of a government under Ismail Haniyeh, is seared in the Hamas consciousness as problematic due to Hamas’ lack of legitimacy. The victory led to a security clampdown on the Gaza Strip and to the deterioration of living conditions in the Gaza Strip. Hamas thus opted, in the spirit of various Muslim Brotherhood doctrines, for resiliency and step-by-step incorporation within the system, to build up political power and shore it up with legitimacy — and then to exploit these elements in order to assume control of the system.

But instead of a gradual rise to power, Hamas was bolstered by Abu Mazen’s problematic conduct, the schism within the Fatah movement and the collapsing legitimacy of the Palestinian Authority under Abu Mazen’s leadership as its president.

It is possible that, had elections gone forward, Hamas would have been willing to win them and lead the Palestinian system, in the calculation that Israel is currently weak and circumscribed in its maneuvering and that the pressure that the European Union and the United States have exerted on Abu Mazen to hold the elections would have also obligated them to accept the outcome.

As for Israel, even with the suspension of elections, playing into Hamas’ hands remains unwise. Israel would do well to put a halt to the factors in which its conduct contributed to the storm rising in Jerusalem, and to weigh a more significant response to the Hamas-initiated escalations in a way that marks out the boundaries with which Israel is prepared to live.