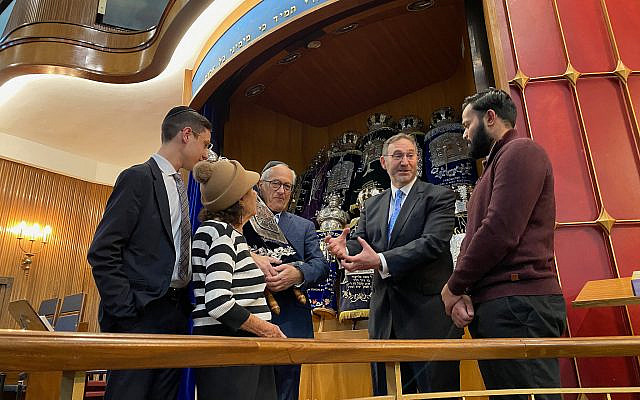 Azeem being shown the ark at Kinloss (Via Jewish News)

The growing number of stories about people and institutions in public life making antisemitic comments, or having to account for anti-Jewish social media posts from their past, poses a new challenge for the Jewish community: how should we respond to the people at the centre of these stories when they try to apologise?

Two examples of this have been in the news recently. The Royal Court Theatre apologised for giving an obviously Jewish name – Hershel Fink – to a rapacious, exploitative billionaire character in a new play, and their initial apology was deemed unsatisfactory by many. The theatre said this was an error caused by “unconscious bias”, which sounded to a lot of people like a sophisticated way of dodging responsibility for actually thinking up an antisemitic character.

In contrast, the cricketer Azeem Rafiq took full responsibility for antisemitic comments he made on Facebook a decade ago when they were revealed in The Times, saying “I have absolutely no excuses. I am ashamed…  I was 19 at the time and I hope and believe I am a different person today. I am incredibly angry at myself and I apologise to the Jewish community and everyone who is rightly offended by this.”

I’m sure we are all used to the kind of apology ‘to anyone who might have been offended’ – which is another way of not apologising at all – so it was refreshing that Rafiq acknowledged we are right to be offended, and that it was entirely his fault.

Such an apology should not be the end of the matter, but rather a platform from which to enquire why Rafiq made those antisemitic comments and what he needs to learn to ensure he understands why they were so offensive. To his credit, this is what he has done.

I met Rafiq with my CST colleague Jonny Newton last week, having initially spoken to him last week. He also separately met two different Holocaust survivors and visited a synagogue. Azeem had previously had no meaningful contact with the Jewish community so this was all new to him.

We can only take people as we find them: and I found Rafiq keen to learn, open-minded, humble about his own ignorance and failings, and determined that his campaign against racism, in cricket and in wider society, will now include an awareness of antisemitism that he didn’t have previously.

It should not be lost in all of this that Rafiq has suffered appalling racism himself, in a way that has affected his life and career, and the antisemitic attitudes he expressed in 2011 are only a small part of that story. If Rafiq is truly determined to dismantle the culture of racism that he has exposed in his sport then that would be to the benefit of all of us.

Of course, people must be judged by their actions as well as their words. This was the Jewish community’s message to Sir Keir Starmer when he apologised for his party’s antisemitism after becoming Labour Party leader in April 2020. Under Starmer’s leadership Labour has taken significant and wide-ranging action to expel antisemites from the party and dismantle the antisemitic culture that encouraged them to join in the first place. The problem of antisemitism, although still present, is much reduced and Starmer himself was warmly received at the recent Labour Friends of Israel lunch. He had followed his apology with meaningful, sustained action – and the community noticed.

Rafiq will find the same. The convincing nature of his apology opened the door to the Jewish community, and as he discovered this week, there will always be a willingness to embrace somebody who wants to make amends. This is to our community’s credit: but the opposite is also the case, and we are rightly quick to slam the door shut if an apology turns out to be insincere. Rafiq made a good start this week, and I hope and expect he will continue along this path in the future.