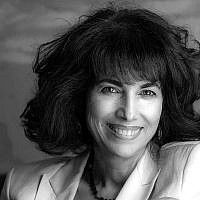 The Blogs
Gilla Nissan
Apply for a Blog
Please note that the posts on The Blogs are contributed by third parties. The opinions, facts and any media content in them are presented solely by the authors, and neither The Times of Israel nor its partners assume any responsibility for them. Please contact us in case of abuse. In case of abuse,
Report this post.

This is an interview I had with Rabbi Jonathan Omer-Man for Parabola. Both the man and this magazine were important in my life. Jonathan introduced me to Jewish mysticism and to the roots I didn’t know I had. We met when he was hired by Hillel-UCLA to come from Jerusalem to investigate a burning question: why so many young Jews were attracted to traditions other than their own. At that time, I was a student of Gurdjieff, a relatively-unknown mystic philosopher who developed a sincere way to ‘wake up’. I learned both ways: the Jewish one and the Gurdjiffian (what is called “the Fourth Way”). I started writing for Parabola in 1999, and became a frequent contributor to a magazine which honors all traditions and esoteric doctrines.

The following is my conversation with Rabbi Omer-Man: “Accepting the Mystery” (Parabola, On Suffering, Spring 2011)

Gilla Nissan: What do the sources of Jewish tradition tell us about suffering?

Rabbi Omer-Man: Within the Jewish tradition, though perhaps we should say traditions, there are numerous reflections on the topic of suffering. These come from a range of perspectives; some emphasize the locus of the suffering, be it the individual human being, the group, the nation as a whole, or universal. Others are more concerned with the causes of suffering, if it is a consequence of one’s actions or not; whereas yet others are more concerned with appropriate responses to suffering. And underlying all of these is the question of the meaning of suffering: how could a just benign God permit such pain to exist? From the earliest Biblical sources, through the medieval commentaries, philosophical, literary writings, and later Hasidic works, writers struggle with the issues.

Let’s look first at the suffering of an individual. Of course the biblical Book of Job jumps to mind. It is clear from the story that Job’s many tribulations were in no way the consequences of his actions, but rather of a strange wager between God and the Satan. Job was not iniquitous, he did nothing wrong; he lived a basically righteous life. His sufferings appeared to be random, inexplicable; they just happened. At first he seemed to be able to live with his grief, until his friends arrived and sought to console him with philosophical, religious, and moral ideas. He was broken not by a series of catastrophic events, but by their attempt to impose extraneous meaning on it all. That was the point at which he lost his equanimity, at which famously he cursed his fate.

Lauren Deutsch: So, in their effort to console, they only reinforced the existence of badness?

On the other hand, we also speak of suffering that comes about as a result of human actions. In this respect we can look at in the Jewish fast day of Tisha be’Av, the 9th of Av, which commemorates the destruction of both of the Holy Temples in Jerusalem. Our sources all relate that the immediate cause of this was immorality on the part of the inhabitants of the city. It wasn’t a proportionate consequence – desecration and exile of the entire nation following gossip and defamation. But nevertheless it was a consequence of our actions.

GN: Last Tisha b’Av we learned that while we mourn the loss of our Temples of the past, we are also mourning the loss of our sense of holiness within ourselves today. Can you provide some thoughts about this?

There is a perfect example of this is in a hasidic interpretation of the experience of the Children of Israel in their Exodus from Egypt. I’m not going to recapitulate the entire story, just talk about one aspect of it. To start with, it’s important to establish the difference between pain and what in this context we can call wretchedness. Pain is factual, it is extreme discomfort, physical or mental, or both. Wretchedness (the Hebrew word is ʿatzvut), on the contrary, is not “real,” it is a psychic construct that serves to buffer us from experiencing unbearable pain. In the short term it is an essential mechanism, and can keep us sane, but when maintained for too long it creates major spiritual problems.

What happened with the Children of Israel was that in the initial stages of their slavery they buffered themselves against the pain: they grumbled, they complained, but somehow they made slavery comfortable. Their coping mechanism was to restrict their vision: they lost their sense of identity, and fell into a sense of melancholic non-action. “This is the way it is.” “Maybe we can’t take cruises down the Nile, but we’ve got enough food to eat, somewhere to sleep, and the workload is bearable.” They fell into the trap of self-pity, true wretchedness. They cut themselves off from both the Divine presence in the world and from the Source, the One. They were wretched and alone, and hopeless.

Then Moses arrived on the scene. He came from the outside, and so was not involved in their dramas. In order to create a shift, a movement, he proceeded to exacerbate matters: he provoked Pharaoh into worsening the conditions of their slavery, to make their life so unbearable that no buffering could shield them. Then they moved into the condition known in Hebrew as merirut, bitterness. Their situation was no longer tenable. They realized that there was a choice. “We don’t want to live this way.” They smashed the shell of wretchedness, and the Exodus began.

Lauren Deutsch: He raised the stakes?

Let’s change the subject. Chapter 53 of the Book of Isaiah offers a completely different approach, that of redemptive suffering, the suffering of an individual that can transform not just that person, but all of society, perhaps even the cosmos. This is the “suffering servant,” the individual whose suffering takes on the pain of the world. Christianity adopted this and invested it in the figure of Jesus. Partially as a result, many Jews withdraw from this position. There has never been a consensus as to whether this “suffering servant” is an individual or the entire Jewish people.

Rashi (an 11th century commentator), for example, held the latter position, that the community of Israel bears the pain of the world, and that the world can be redeemed through its efforts. Whereas, others, such as Rabbi Nachman of Breslov (1782-1810, an important Hasidic leader), speak of how the tzadik, the righteous person, the fully realized human being, can take on such suffering in a way that is transformative.

GN: Not everyone’s a tzadik. What does Rabbi Nachman advise the rest of us to do when we are confronted by a situation that has the potential to cause us suffering?

Not for a moment am I suggesting that all suffering is voluntary.  There is terrible pain and distress in the world. What I am referring to is the fact that we can develop a predisposition to wretchedness, to feeling safe with it, consoling oneself. To overcome that, we must learn to remove the “poor me” from the equation. Moving away from “poor me, I have I have terrible arthritis in my knee,” to “I have terrible arthritis in my knee”. Don’t get me wrong, feeling sorry for oneself can be a necessary defensive measure, but only if it is temporary, a kind of dullness before the necessary sharpness. It’s in the sharpness that suffering can become redemptive.

LD: Is the goal to remain in that protective stage for as long as possible?

GN: Is this voluntary suffering?

GN: Can suffering be a means to deepen one’s spiritual work?

GN: There’s still something I want to understand about the ability to stand in front of something difficult and bear it. Where does this ability come from?