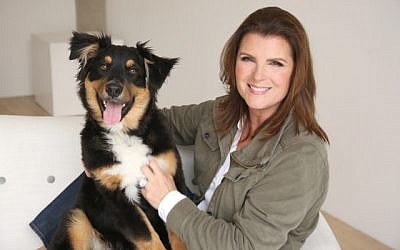 Like many of you, I became a fan of Kimberlin Brown years ago, when she started portraying the legendary villainess, Sheila Carter, on The Young and Restless, and then on The Bold and The Beautiful years ago. In fact, she was finishing up an interview with a European media outlet, as the character is currently involved in a major storyline airing there, when we spoke.

I then learned what a smart, well informed activist she was when I went to the 2016 Republican National Convention and heard her speak, to many in the audience who really didn’t know her acting, and watched them won over. Her speech introduced someone very different from the villainess she portrayed.

Her story is one of pride, a third generation California native. Her activism started as a small business owner with her husband, and her inability to get adequate healthcare for her employees under Obamacare. Then came the Iran Deal controversy in 2015, and her concern as a Christian Zionist in the Obama’s administration in dealing with Israel. “Every single country has the right to protect themselves, ” Pelzer said, adding, “Recent events across the globe have illustrated how dangerous it is to allow radical regimes access to nuclear weapons. We cannot allow these regimes to continue on the path they are on for the sake of Israel, the U.S., and our other allies. Simply put, there couldn’t be a greater divide between my opponent and I in how seriously we take these threats to our shared national security.”

She cited how her district, her state, and our country can benefit from all the technology, resources, and medical advances related in Israel.

“The media doesn’t talk about the innovations created in Israel, or give credit where it’s do,” Pelzer said.

Here are some of her positions on our issues:

Iran
The threat of Iran developing and possessing weapons of mass destruction is the greatest threat to the free world that exists today. The Iran deal negotiated by the Obama Administration was a complete disaster. Instead of standing by our convictions and making a real effort to make the world a safer place, the U.S. folded to Iran’s demands in pursuit of a quick victory that could be used for political gain. This gave Iran an easy pathway to obtain nuclear weapons which they have openly vowed to launch at Israel, were that day to come.

As the world’s largest state sponsor of terrorism, my opponent took direct marching orders from the Obama Administration and voted for the deal. Not only did the deal provide Iran with the means to create nuclear weapons, it went further and awarded them $150 billion—money that even John Kerry admitted would ultimately fund terrorism efforts.

President Trump’s commitment to pull out of the flawed deal with Iran restores hope that we’re back on a pathway towards permanent peace. The U.S. needs to continue to embrace a more comprehensive strategy against Iran and the other bad actors that threaten our allies. We cannot make deals with these dictatorships that appease their demands in the hopes that these conflicts simply go away. The Middle East promises to be the most dangerous part of the world for the foreseeable future, and Israel remains not only our strongest, but one of our only allies there. I am boldly and unapologetically in favor of renegotiating the Iran deal and taking a much harder line with countries that threaten Israel in general and will actively seek to be a part of these efforts in Congress.

Material Assistance for Israel
It is a disgrace that the Boycott, Divest, and Sanction movement exists in the first place. However, this should not discount how seriously it should be taken. This is a movement that’s true desire is to see the demise of the state of Israel as we know it, and our leaders in Washington and across the country should do everything in their power to combat this movement on every front.

As the strongest military power in the world, the U.S. must also ensure that Israel’s defense forces are as advanced as possible. It is imperative for Israel to maintain the ability to defend itself in a region of the world where they are surrounded by enemies on almost all sides. This policy equally benefits the U.S—with a military foothold in Israel, we are able to collect intelligence on those who wish to also see the demise of the West. This in turn ensures our own national security.

Jerusalem
There is no denying that Jerusalem is the historical capital of Israel and the Jewish people. Moving the political capital to Jerusalem is common sense, and a move that is deeply important to Jewish culture. Those who disagree still seem to refer to it as the capital of Israel in every other sense except by name. I am happy to see that President Trump followed through on his campaign promise to move our embassy there. This was a move that will strengthen our relationship with Israel and move everyone involved closer to peace. The U.S. should not allow the U.N. from deterring us from making this move, nor should we allow them to dictate our interests for us in any other part of the world. I pledge to oppose all efforts to censure, condemn, or punish Israel for establishing Jerusalem as its rightful capital.

J Street
I believe it’s also important to point out my opponent’s close ties to the organization J Street, to further convey how wide the divide is between the two of us on this issue. J Street has consistently endorsed Raul Ruiz in his campaign, and he has been a featured guest at several of their fundraisers. I am a strong believer that J Street’s work is counter-productive to Israel’s well-being as a nation and consistently seeks to undermine efforts towards peace in the Middle East. It goes after our freshman Democrats on college campuses and successfully brainwashes them.

Peace
I fully support whatever position President Trump, Vice President Pence, and the administration take regarding peace in the Middle East. Since the Palestinian Authority and Organizations that the Federal Government declared “terrorist groups” do not recognize Jerusalem as the capital of Israel, I find it troubling to discuss a two-state solution as well. Israel must be recognized as the legitimate Jewish state and violence in Gaza must end.

We must oppose the BDS movement that boycotts, divests and sanctions Israel, and support Judea and Samaria. Jews, Christians and Moslems live, earn money and practice their religions freely in this part of Israel. They should be able to live their lives without risk of death from Radical Islamic Terrorists.

Until this occurs, I am opposed to Palestinian statehood or membership status in the United Nations. I also support the policy of cutting U.S. funding of any U.N. agency that admits Palestine as a member state.

“As a member of Congress, I will pledge to do everything in my power to ensure the safety of Israel, the advancement of its interests, and strengthening the U.S-Israel relationship! My ego doesn’t come into play for me, it’s about the American people,” Pelzer stated firmly.

I have a feeling that Kimberlin Brown Pelzer will take on Washington like she did as Sheila Carter, going the distance to get her way.