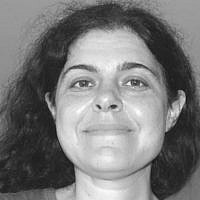 The Blogs
Rachel Bell
Apply for a Blog
Advertisement
Please note that the posts on The Blogs are contributed by third parties. The opinions, facts and any media content in them are presented solely by the authors, and neither The Times of Israel nor its partners assume any responsibility for them. Please contact us in case of abuse. In case of abuse,
Report this post.

Social media is awash with stories of Jewish Americans raising awareness and money for Syrian refugees, marching to fight against Islamophobia, and hosting interfaith meetings and community awareness programs. I see Jews transforming their traumatic and painful association with the Holocaust to make themselves finer by helping refugees.

I struggle to think well of our actions, but more and more I have a sinking feeling that we are simply deluding ourselves and that we are helping people who cannot but commit themselves to destroying us. I did not start out thinking this way. Sadly, it has been participation in peace forums that have led me to this conclusion.

I have started to contrast our actions to the huge marches across Europe in the past year to protest against the state of Israel, marches where the most popular chant seemed to be Death to the Jews and others in a similar vein, with increasingly violent acts of hatred towards Jews.  Marches and hate acts that, for example, have frightened Jews into leaving France in record numbers.

We have a historical religious and national identity that comes from our past. We identify as Jews, people of the country of Judah. Did we actually choose this identity for ourselves, did we insist that everyone else see us this way, that we were perpetually to be named after our country of origin of long ago? After all, there were two countries, Judah and Israel. Why Jews? Yet that is our identity. We have a religion that comes from the age of our national roots. Just as we lost our land, we created a fellow religion which became a dominant world faith, whereas ours remained a modest ethnic faith. And because of the creation stories of thta world faith, the modesty of our ethnicity has led to generations of our genocide.

I read of a professor in University of San Diego wearing yellow stars with the word Muslim written on them, all to protest Islamophobia, in spite of the fact that it was Muslims themselves who instituted the rule that Jews had to wear yellow and black dress to distinguish them from Muslims. This professor didn’t even bother to remember the history of Muslim discrimination towards Jews, claiming that his group now wears the colored badges with “the utmost respect”. Hundreds of years of abuse are thereby wiped out without an apology in order to make political points. And this seems to be the rule of late, to appropriate our traumas for their benefit. And at the same time they insult us for remembering what we cannot help remember by blaming us for “playing the victim card.”

I see Jews putting such effort into doing what is good, effort directed to help a huge, complex group of people with many cultures, opinions, and ideas. It would seem like a good thing to do. Yet what I have recently read in peace groups about what Muslims actually think and see how far apart we are in terms of our moralities, the less sure I am that this makes any sense.

In recent discussions, I realized something which made me aware of how dangerous our ignorance is. I realized that revenge is considered a right by many people, yet not by us. This is why acts of violence and murder are done, because it is a right. It is not just about lack of privilege, hardship, or other reasons. It is because it is a RIGHT. Considering other religions as intrinsically and perpetually inferior is also a RIGHT. Murder to avenge various problems, insults, or issues, is a RIGHT. People who are peaceful in intent are polite about their reasons, but so many believe in these concepts as rights, that the concept of peace is losing meaning.

So when I hear programs about the hatred that so many Muslims preachers, faith teachers, and organizations express towards other religions, and towards Jews in particular for our historical national and religious identity, and realize that even the most noble have moral equivalences that I can’t accept or support, I despair. I now think I have been a fool to try to reach out, and we are all fools to try. We are useful idiots. We are doing acts of kindness out of a sort of madly stupid ignorance.

I wish someone could tell me something that would change my mind and renew my hope. But when the peace groups themselves make me despair, what is left? And every time I turn around, another Jewish person is stabbed or shot in a terrorist act. If these acts of revenge are a right, if so many people actually believe that a murder or death anywhere can justify revenge anywhere, then to struggle for the rights of such people is on our part an act of insanity and self-destruction.

It’s incredibly depressing to think that our fine moral actions are in service of such destructive people. I would love to find out differently. But sadly, that is the way reality is working. But please, prove me wrong. I beg you to prove me wrong. Please.

About the Author
Rachel Bell considers living in Israel a challenge, as is writing for a living for over 20 years. Her family, from Tzfat and later Tel Aviv, left her a legacy of commitment to the project of self-determination and indigenous self-actualization called Israel.
Related Topics
Related Posts
Comments