The political platform recently published by the Movement for Black Lives repeats the demonizing rhetoric of the infamous antisemitic NGO Forum of the 2001 Durban Conference, which launched the BDS movement. The platform labels Israel as an “apartheid state”, accuses the country of committing “genocide” against Palestinians, calls for an end to military aid, and endorses the anti-Israel BDS movement, including opposition to the “expanding number of Anti-BDS bills being passed in states around the country.” In response, a number of mainstream Jewish organizations issued condemnations, including the American Jewish Committee, the Anti-Defamation League and the Reform movement’s Religious Action Center.

In the initial text, the Black Lives platform listed Nadia Ben-Youssef, who represents the Israel-based Adalah organization in the US, as an “author and contributor.” The BLM platform also included a reference to Israeli laws that allegedly “sanction discrimination against the Palestinian people,” based on the tendentious “database of discriminatory laws” published by Adalah. This publication refers to Zionism in a pejorative manner, and makes no distinction between laws that were actually passed by the Israeli Knesset and legislative proposals that went nowhere. Furthermore, laws promoting Zionism and the historic Jewish connection to Israel are labeled as discriminatory, including the use of Jewish symbols and the Hebrew calendar.

Adalah’s participation in the BLM project was not particularly surprising, as the NGO has often been involved in political campaigns that promote the Palestinian narrative and seek to isolate Israel through the use of labels such as “racist”, “apartheid” and “anti-democratic”. The reference to Adalah in the BLM platform was reported by the Jewish Telegraphic Agency (JTA) and other media frameworks, and noted by NGO Monitor.

However, as criticism against the platform mounted, Ben-Youssef’s contribution as an author suddenly disappeared from the BLM text, without explanation, and instead Adalah is listed as an “organization currently working on policy.” In response, JTA altered its article to reflect the new description in BLM’s publication, but the news service did not indicate that it had sought to clarify the reasons for the change. Adalah did not issue a statement or clarification regarding its role in the sections of the BLM document that promotes BDS and the demonization of Israel. 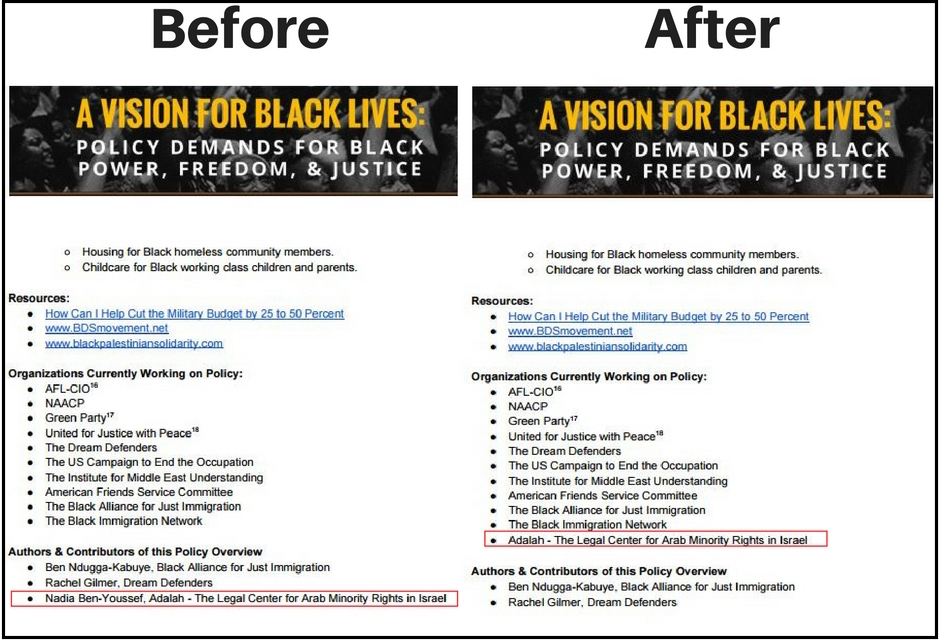 With and without the Adalah credits. Screen shots by NGO Monitor. (Click to expand.)

At the same time, employees of the New Israel Fund (NIF) launched an aggressive social media campaign to demand the removal of Adalah’s name from other articles on the BLM platform and demonization of Israel. In many ways, Adalah is the flagship grantee of the NIF, receiving close to $2 million between 2008 and 2015. (The funds run by George Soros have provided a similar amount, and a number of European governments are also major grantees.) However, Adalah is also a major problem for the NIF, which advertises itself as a “liberal, progressive” pro-Israel organization, and whose guidelines clearly state that they “will not fund global BDS activities against Israel.” Proof that Adalah violates these guidelines would pose a serious problem for the NIF leadership. 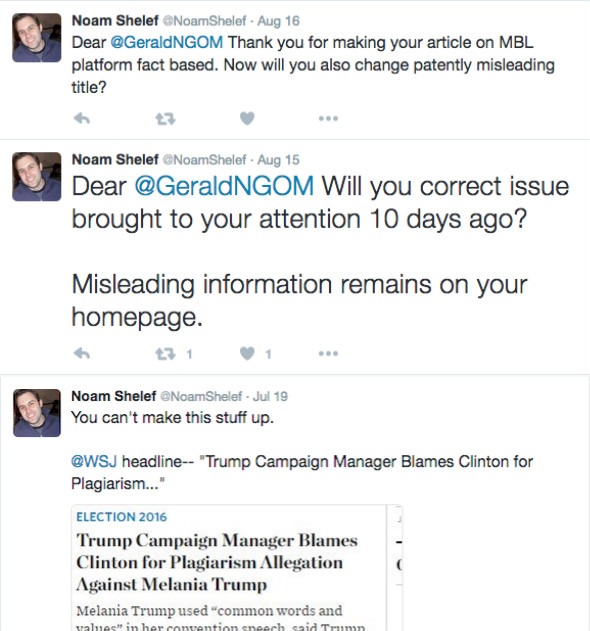 Screenshot of tweets from NIF’s Deputy VP of Communications.

This is not the first time that the NIF has used strong-arm tactics to revise and redact embarrassing references to Adalah and BDS. In 2012, the program for a BDS “apartheid week” event scheduled for Geneva included Suhad Bishara, the director of Adalah’s Land and Planning Rights Unit. After NGO Monitor brought this to NIF’s attention, Bishara’s name and affiliation were removed from some of the advertising, and was replaced by a statement reading, “For security reasons, we do not mention [the speaker’s] name on the site.” In the end, it was unclear whether Bishara participated, and an explanation of how or why her name was initially listed and then removed was never given.

At the time, the NIF public relations staff attacked NGO Monitor for raising this issue, including publication of a libelous blog post in the Times of Israel (March 6, 2012) containing a number of false claims and unrelated political declarations. Yehudit Karp, an NIF board-member and former deputy attorney general, is listed as the author of the post, but in a series of meetings with me, she acknowledged that she did not know the details of the Adalah Geneva BDS issue, and had agreed to put her name on a text written by someone else. Rather than ensuring that grantees including Adalah stayed far away from BDS, the NIF opted to attack the messenger.

The insertion of Israel into the American racial conflict (“intersectionality” in the radical political jargon) is unwarranted, and the stakes are high: NGO promotion of BDS in this context can exacerbate tensions between the Black and Jewish communities. And while the NIF knows how to raise its voice in criticizing Israel, it has chosen to avoid this issue rather than lending its liberal and progressive credentials to protest efforts to use BLM as a platform to demonize the Jewish state. If Adalah was in no way involved with the Platform, despite the initial publication, NIF should clearly say so; and if the links are real, pressure to erase the traces from the public record are duplicitous.

Gerald M. Steinberg is a political science professor at Bar Ilan University, and president of NGO Monitor, a research institute in Jerusalem