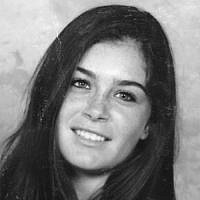 The Blogs
Allison Gorokhovsky
Apply for a Blog
Advertisement
Please note that the posts on The Blogs are contributed by third parties. The opinions, facts and any media content in them are presented solely by the authors, and neither The Times of Israel nor its partners assume any responsibility for them. Please contact us in case of abuse. In case of abuse,
Report this post.

It started with Israel — Jerusalem to be exact. That sounds like the beginning of some dramatic novel about the origins of monotheism or the Arab-Israeli crisis. So, let me rephrase. Coming to terms with the fact that the rest of my college summers and the years that followed would be spent committing to long hours in bustling cities, my focus for ‘Summer 2018’ had exactly one requirement – doing what I loved in a place that I adored.

Everyone suggested to first tackle the geographic portion of the equation, but, to me, the answer was a no-brainer. Having forgone my dream of spending a gap year in Jerusalem before starting at Penn, I imagined myself getting lost in the corridors of the Old City and not-so-gently pushing through the crowds of the Mahane Yehuda Market. In true Israeli fashion, the El Al flight was booked later that evening. Cool! – or the way they say it in Israel – Sababa!

While the ‘where’ had been nailed down, the ‘what’ was still up in the air. Asking for help has never been my strong suit, but hours spent making pros and cons lists, frantically googling, or simply pondering the meaning of life in statistics lectures proved fruitless. On the other hand, a few conversations with my trusted mentors, closest friends, and my parents allowed me to envision my ideal summer – simply put, a program that combined business experience and Jewish education. Less than 24 hours later, a close friend who deserves more thanks than I will ever be able to express, made an introduction to the director of the OU/JLIC “Summer in Jerusalem” program and marked the end of my short-lived search.

Nothing could assuage my Russian-Jewish parents’ concern, however, as they continued to fear that my time in Israel would be “a two-month Birthright stint” even weeks after I had begun to research potential internships (for the record, I am utterly convinced that that specific genetic combination is prone to worrying 150% of the time). As the day of the internship consultation drew closer, I began to realize that I had no concrete answer as to what I wanted to do – I was just searching for a place I could learn. A lot. Shortly after, I happened across an old article from The Economist about the Israeli startup scene and the investors that were making the innovation possible. “Ah, venture capital. So, you do go to Wharton after all,” said the internship consultant as she ended the call. A few days later she introduced me to David Stark, a Penn alum and co-founder of Ground Up Ventures.

I typically hate time skips, but I promise you the 19 years between the last chapter and the Epilogue of the last Harry Potter book were much more eventful and you still found a way to forgive that, so bear with me. Writing this a month into my internship at Ground Up, there’s no concrete way to put all that I have learned into writing, so, instead, here’s just a few reasons as to why I love what I do.

First and foremost, it’s David and his co-founder Cory Moelis. They bring infectious energy and excitement to the table, evident from the way entrepreneurs and investors alike jump at the opportunity to work with their fund. It’s also their immeasurable knowledge of venture capital, tech, finance, and just having a good time which makes them the go-to “consultants” for other budding startups within our shared offices and the people I pester with all my questions ranging from investing to job recruiting to the best restaurants in Jerusalem. Their willingness to listen and teach is truly special, and it’s having a seat at the table, both literally and figuratively, that make this experience one of a kind.

Then, there’s the bit about doing meaningful work, an element I only now realize is a determinant for any future undertaking. I never comprehended the invaluable role of investors in a startup’s ability to revolutionize the market, an appreciation I gained after attending my first startup pitches with the partners. Whether its competitor research or reading about the industry, even the smallest piece can have a massive impact.

Lastly, it’s learning about the field itself. Reading about different companies, from startups to Fortune 500s, to predictions about the future of investments and where the market is going, has only further opened my eyes to the necessity of transnational business and cooperation. At the end of day, I know that I made the right choice with my majors in international studies and business because there is no business future without the ability to work across oceans, languages, and cultures.

What pros and cons lists, frantic googling, and blankly staring at histograms won’t teach you is all that you don’t know about yourself, and, for me, that was a lot. No, pretty much everything. Moving away to college meant screwing in lightbulbs, surviving in the snow, and making French toast on an iron at 3 a.m. Moving to a different country meant taking one, big step closer to realizing that experience is the best tool in figuring out what I love to do. So, a month in, here’s where I’m at: investment and venture capital make the future possible, Crave Gourmet Street Food makes inarguably the best midnight snack, and the people you surround yourself with – friends, mentors, and random people you meet at a pitch event or on Ben Yehuda – make the overall experience…sababa!

About the Author
Allison Gorokhovsky is a sophomore at the University of Pennsylvania - The Wharton School studying International Studies and Business, with concentrations in Finance in Management. She is also pursuing minors in Modern Middle East Studies and Russian Studies. Allison grew up with a huge appreciation for various cultures, languages, and religions as instilled by her Ukrainian-Jewish family, and her experiences studying abroad have only added to her love of travel and a deeper understanding of different peoples around the globe.
Related Topics
Related Posts
Comments