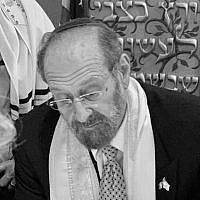 The Blogs
Sam Rothberg
Apply for a Blog
Advertisement
Please note that the posts on The Blogs are contributed by third parties. The opinions, facts and any media content in them are presented solely by the authors, and neither The Times of Israel nor its partners assume any responsibility for them. Please contact us in case of abuse. In case of abuse,
Report this post.

Indiana Jones and the Raiders of the Lost Ark is a delightful fantasy of locating the Ark of the Covenant. At conclusion of the movie the Aron becomes lost again in a giant government warehouse. There are other narratives as well. One is the urban story of the Aron, during the siege, being secreted out of Jerusalem through a tunnel & eventually domiciled in Ethiopia. Hence the tradition of Emperor Haile Selassie.

Another less complicated narrative has the Aron being found by the Knights Templar. Having it shipped to England where it still resides & so the English are called British – Brit-ish. Is that why the Royal House has its sons circumcised?

We know the Babylonians not only plundered the Beit HaMikdash, they razed it to the ground. In addition they dug up and scattered the foundation stones. Thus we can only surmise the exact location of where Solomon’s Beit HaMikdah sat.

But by all accounts there is no mention of their capturing the Ark. Certainly a find as important and religiously significant as the Ark would have been a prized possession to sit amongst the Babylonian gods in Nebuchadnezzar II’s palace.

They razed it to the ground & below yet did not locate the Aron.

We do know this: the architecture and design of the Beit HaMikdash was similar to other palaces in the Fertile Crescent at that time & all of them had either secret passages or underground tunnels that would allow the despot to move unseen throughout his abode. Tunnels and passageways were a part of palatial architecture up through the building of the castles we find in Europe. There are even tunnels and passageways beneath the United States Capitol in Washington.

Now an urban narrative: You are a Kohen at the end of a two year siege of Jerusalem. The walls of Jerusalem have been breached & it will be a short time before the Beit HaMikdash is reached. Certain death is only hours away. As a Kohen you know that it is not the gold or brass that is the most precious object in the Beit HaMikdash but the Aron. You gather a few surviving kohanim, violate the Holy of Holies, cover the Aron with its blue tarp and move the Aron from the Holy of Holies to one of the underground passageways. There you and your colleagues work to collapse the tunnel, thus hiding the Aron from the Babylonians.

Is this account any more outlandish than the Ethiopian or British narratives? It is certainly less complicated and given human religious notions more logical. You bury your treasure. I suggest that some 500 to 700 feet below street level at the Kotel lies the Aron directly under Har HaBeit. Yerushalayim is the most conquered City in the world because whoever holds Jerusalem in some way holds the Aron. Thankfully it has come back to its rightful owners.

About the Author
I am a 5th generation Rhode Islander. BA from the University of Rhode Island in Social Psychology, MAHL and ordination from the Hebrew Union College in Cincinnati & a MBA from the University of Southern Mississippi. I have served congregations in MS and Southern Florida on a full and part time basis since the late 1970s. I left the full time rabbbinate in the mid 1980s and built a business as a financial planner & investment manager.
Related Topics
Related Posts
Comments