When we imagine close encounters of the third kind shaping human civilization, our mind goes to Africa and Egypt.

When we think of a continent infused with legends, spirits, ritual possessions and a world vision that blends the mundane and the fantastic seamlessly our minds will inevitably wander towards Africa.

Yet, most of the world doesn’t look to Africa for the translation of these ideas into literary mediums such as Science Fiction and Fantasy (SFF), still very much perceived as products of Western cultural proclivities, mired in visions of the world that reflect euro-centric ethnic divisions and up until recently the straight white man’s bounty.

Things are a changing thanks to a vanguard of African independent publishers and authors who are striving to change the impression that African SFF doesn’t exist, to open the world to non-western visions of the future, and provide a platform for African authors to showcase their craft.

Among these innovators, AfroSF, published by Zimbabwean writer/editor, Ivor Hartmann’s Storytime, was the first anthology of its kind open to African writers of Science Fiction, as well as long-term residents on the African continent, and African writers in the diaspora.

Critically acclaimed, AfroSF, published in 2012, compiles visions of Africa, and the world’s future through the political, technological, spiritual and often revolutionary lenses of modern day African male and female writers.

Ivor is at it again with AfroSFv2 to be released on December 1st of this year. (See the cover and Table of Contents below this article).

Comprised of five novellas (17,500- 40,000 words each) this new opus raises the bar, offering what are in practice short-length novels, rather than a collection of short stories, allowing a deeper insight into the worlds imagined and giving a solid example of the talent the continent has to offer to the genre of speculative fiction.

Of particular interest to readers of the ToI, Hell Freezes Over, by Mame Bougouma Diene, centers around a people of Middle Eastern descent, and their struggles to survive the challenges ahead of them.

Our modern view of the world is full of the Torah and the Old Testament. When we look to the myth and legends of our imagined past, we look to the Flood, Babel, the Plagues of Egypt, and Samson and Delilah.

Perhaps, as we look into the future, we will start seeing it through African eyes as well. 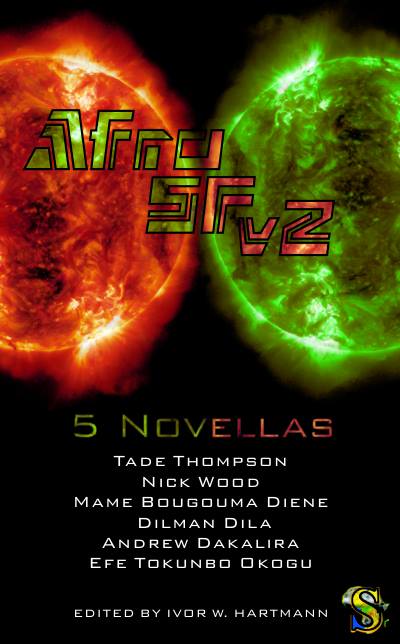 Continuing the groundbreaking tradition of the first volume AfroSFv2 is an exciting anthology of five original SF novellas by African writers.

‘Hell Freezes Over’
Mame Bougouma Diene
Long after the last skyscraper has drowned who remains and how will they survive?

‘The Flying Man of Stone’
Dilman Dila
When ancient technology seems like magic legends live again in the midst of war and sides will be chosen.

‘VIII’
Andrew Dakalira
A space shuttle crash, the numeral eight, serial murders, what connects them all could end humanity.

‘Paradise City’
Efe Tokunbo Okogo
Change is coming to Paradise city and it won’t be pretty, but if this is paradise then heaven must be hell in need of a revolution.