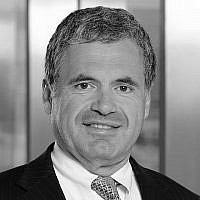 The Blogs
Steven M. Goldberg
Apply for a Blog
Advertisement
Please note that the posts on The Blogs are contributed by third parties. The opinions, facts and any media content in them are presented solely by the authors, and neither The Times of Israel nor its partners assume any responsibility for them. Please contact us in case of abuse. In case of abuse,
Report this post. Back in 1992, when the DC Court of Appeals denied Jonathan Pollard’s appeal of his life sentence imposed by District Court Judge Aubrey Robinson, one of the two justices who voted to affirm the life sentence was none other than Ruth Bader Ginsburg. The life sentence was extraordinarily harsh given a variety of factors ordinarily considered in sentencing, including Pollard’s voluntary guilty plea, which spared the government the cost and embarrassment of a public trial, his cooperation, the fact that he sold secrets to an ally of the United States instead of an enemy, and the promise of the Justice Department not to seek the maximum sentence as part of a plea deal. The evidence was clear that the Justice Department broke its promise and violated the plea agreement. Nevertheless, Ginsburg voted to affirm the conviction.

Approximately 15 months later, newly elected President Bill Clinton elevated Ginsburg to the United States Supreme Court. It is an open question whether Ginsburg would have received this promotion to the highest court in the United States had she voted to overturn Pollard’s conviction. It is also an open question whether personal ambition played a role in her vote to affirm, especially in view of Ginsburg’s significant history of being a staunch civil libertarian who placed a premium on protecting the rights of criminal defendants. Ginsburg’s vote was out of character, which makes it reasonable to question whether her desire to be considered for the Supreme Court played a role in her decision.

There is another likely result of a decision to announce an intention to indict before the election. It is not unusual for the Attorney General in Israel to be subsequently promoted to Israel’s Supreme Court. Despite the progress made by Justice Minister Ayelet Shaked, the left still has the strongest voice in approving judicial appointments, including to the Supreme Court. Mandelblit will be a darling of the left if he exercises his discretion to announce his intention to indict Netanyahu before the election, and his chances of being promoted to the highest position a lawyer can achieve in Israel will be greatly enhanced.

By all accounts Mandelblit is a highly ethical lawyer who strives to achieve justice. Jurists and lawyers are implored not only to avoid conflicts of interest, but also the appearance of a conflict of interest. A voluntary decision to announce the indict Netanyahu before the election, followed in the next year or two by the elevation of Mandelblit to the Supreme Court, will create exactly such an appearance of an improper conflict of interest. The Israeli people will never know if Mandelblit’s voluntary decision to announce his intent to indict Netanyahu was in service of his personal ambition.

Given the stakes for Israel, it is incumbent on the Attorney General not to interfere with the Israeli election. He can make his announcement shortly after April 9. It is the only way to avoid the stain that a pre-election announcement would place on Mandelblit’s heretofore impeccable reputation.

About the Author
Steve Goldberg is an attorney in Los Angeles and a partner at the law firm Manatt, Phelps & Phillips, LLP.
Related Topics
Related Posts
Comments