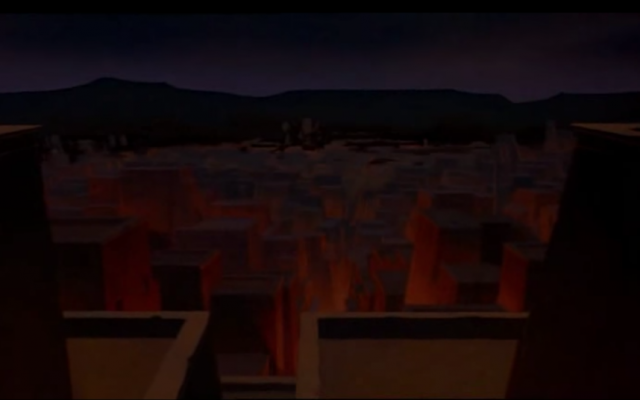 The ninth plague – darkness – comes shrouded in a darkness of its own.

What is this plague doing here? It seems out of sequence. Thus far there have been eight plagues, and they have become steadily, inexorably, more serious.

The first two, the Nile turning blood-red and the infestation of frogs, seemed more like omens than anything else. The third and fourth, gnats and wild beasts, caused worry, not crisis. The fifth, the plague that killed livestock, affected animals, not human beings.

The sixth, boils, was again a discomfort, but a serious one, no longer an external issue but a bodily affliction. (Remember that Job lost everything he had, but did not start cursing his fate until his body was covered with sores: Job 2.) The seventh and eighth, hail and locusts, destroyed the Egyptian grain. Now – with the loss of grain added to the loss of livestock in the fifth plague – there was no food. Still to come was the tenth plague, the death of the firstborn, in retribution for Pharaoh’s murder of Israelite children. It would be this that eventually broke Pharaoh’s resolve.

So we would expect the ninth plague to be very serious indeed, something that threatened, even if it did not immediately take, human life. Instead we read what seems like an anti-climax:

Then the Lord said to Moses, “Stretch out your hand towards the sky so that darkness will spread over Egypt – darkness that can be felt.” So Moses stretched out his hand towards the sky, and total darkness covered all Egypt for three days. No one could see anyone else or leave his place for three days. Yet all the Israelites had light in the places where they lived. (Exodus 10:21–23)

Darkness is a nuisance, but no more. The phrase “darkness that can be felt” suggests what happened: a khamsin, a sandstorm of a kind not unfamiliar in Egypt, which can last for several days, producing sand- and dust-filled air that obliterates the light of the sun. A khamsin is usually produced by a southern wind that blows into Egypt from the Sahara Desert. The worst sandstorm is usually the first of the season, in March. This fits the dating of the plague which happened shortly before the death of the firstborn, on Pesach.

The ninth plague was doubtless unusual in its intensity, but it was not an event of a kind wholly unknown to the Egyptians, then or now. Why then does it figure in the plague narrative, immediately prior to its climax? Why did it not happen nearer the beginning, as one of the less severe plagues?

The answer lies in a line from “Dayeinu,” the song we sing as part of the Haggadah: “If God had executed judgment against them [the Egyptians] but had not done so against their gods, it would have been sufficient.” Twice the Torah itself refers to this dimension of the plagues:

“I will pass through Egypt on that night, and I will kill every first-born in Egypt, man and animal. I will perform acts of judgment against all the gods of Egypt: I (alone) am God.” (Exodus 12:12)

The Egyptians were burying all their firstborn, struck down by the Lord; and against their gods, the Lord had executed judgment. (Numbers 33:4)

Not all the plagues were directed, in the first instance, against the Egyptians. Some were directed against things they worshipped as gods. That is the case in the first two plagues. The Nile was personified in ancient Egypt as the god Hapi and was worshipped as the source of fertility in an otherwise desert region. Offerings were made to it at times of inundation. The inundations themselves were attributed to one of the major Egyptian deities, Osiris. The plague of frogs would have been associated by the Egyptians with Heket, the goddess who was believed to attend births as a midwife, and who was depicted as a woman with the head of a frog.

The plagues were not only intended to punish Pharaoh and his people for their mistreatment of the Israelites, but also to show them the powerlessness of the gods in which they believed. What is at stake in this confrontation is the difference between myth – in which the gods are mere powers, to be tamed, propitiated or manipulated – and biblical monotheism, in which ethics (justice, compassion, human dignity) constitute the meeting point of God and mankind.

The symbolism of these plagues, often lost on us, would have been immediately apparent to the Egyptians. Two things now become clear. The first is why the Egyptian magicians declared, “This is the finger of God” (Ex. 8:15) only after the third plague, lice. The first two plagues would not have surprised them at all. They would have understood them as the work of Egyptian deities who, they believed, were sometimes angry with the people and took their revenge.

The second is the quite different symbolism the first two plagues were meant to have for the Israelites, and for us. As with the tenth plague, these were no mere miracles intended to demonstrate the power of the God of Israel, as if religion were a gladiatorial arena in which the strongest god wins. Their meaning was moral. They represented the most fundamental of all ethical principles, stated in the Noahide covenant in the words “He who sheds the blood of man, by man shall his blood be shed” (Gen. 9:6). This is the rule of retributive justice, measure for measure: As you do, so shall you be done to.

By first ordering the midwives to kill all male Israelite babies, and then, when that failed, by commanding, “Every boy who is born must be cast into the Nile” (Ex. 1:22), Pharaoh had turned what should have been symbols of life (the Nile, which fed Egyptian agriculture, and midwives) into agents of death. The river that turned to blood, and the Heket-like frogs that infested the land, were not afflictions as such, but rather coded communications, as if to say to the Egyptians: reality has an ethical structure. See what it feels like when the gods you turned against the Israelites turn on you. If used for evil ends, the powers of nature will turn against man, so that what he does will be done to him in retribution. There is justice in history.

Hence the tenth plague, to which all the others were a mere prelude. Unlike all the other plagues, its significance was disclosed to Moses even before he set out on his mission, while he was still living with Jethro in Midian:

You shall say to Pharaoh: This is what the Lord says. “Israel is My son, My firstborn. I have told you to let My son go, that he may worship Me. If you refuse to let him go, I will kill your own firstborn son.” (Ex. 4:22–23)

Whereas the first two plagues were symbolic representations of the Egyptian murder of Israelite children, the tenth plague was the enactment of retributive justice, as if heaven was saying to the Egyptians: You committed, or supported, or passively accepted the murder of innocent children. There is only one way you will ever realise the wrong you did, namely, if you yourself suffer what you did to others.

This too helps explain the difference between the two words the Torah regularly uses to describe what God did in Egypt: otot u’moftim, “signs and wonders.” These two words are not two ways of describing the same thing – miracles. They describe quite different things. A mofet, a wonder, is indeed a miracle. An ot, a sign, is something else: a symbol (like tefillin or circumcision, both of which are called ot), that is to say, a coded communication, a message.

The significance of the ninth plague is now obvious. The greatest god in the Egyptian pantheon was Ra or Re, the sun god. The name of the Pharaoh often associated with the exodus, Ramses ii, means meses, “son of ” (as in the name Moses) Ra, the god of the sun. Egypt – so its people believed – was ruled by the sun. Its human ruler, or Pharaoh, was semi-divine, the child of the sun god.

In the beginning of time, according to Egyptian myth, the sun god ruled together with Nun, the primeval waters. Eventually there were many deities. Ra then created human beings from his tears. Seeing, however, that they were deceitful, he sent the goddess Hathor to destroy them; only a few survived.

The plague of darkness was not a mofet but an ot, a sign. The obliteration of the sun signalled that there is a power greater than Ra. Yet what the plague represented was less the power of God over the sun, but the rejection by God of a civilisation that turned one man, Pharaoh, into an absolute ruler (son of the sun god) with the ability to enslave other human beings – and of a culture that could tolerate the murder of children because that is what Ra himself did.

When God told Moses to say to Pharaoh, “My son, My firstborn, Israel,” He was saying: I am the God who cares for His children, not one who kills His children. The ninth plague was a divine act of communication that said: there is not only physical darkness but also moral darkness. The best test of a civilisation is to see how it treats children, its own and others’. In an age of broken families, neglected and impoverished children, and worse – the use of children as instruments of war – that is a lesson we still need to learn.