As the COVID-19 scourge re-explodes, hospitals are re-evaluating policies for allocating and rationing ventilators. During March, a survey revealed that half of US hospitals had policies allocating and rationing ventilators based on age. The US is not alone. Not surprisingly, this respirator policy caused unnecessary deaths. Same with lockdowns and isolation. Many countries had or have more stringent lockdown rules for the aged, resulting in elder abuse. The lockdown policy also predisposed the elderly to depression and dementia. And these conditions, too, cause death.

Depression and Dementia From Quarantine and Lockdowns Cause Death

On June 2, World War II veteran Chester Peake died just short of his 100th birthday. The primary cause of death was listed as “social isolation and failure to thrive.” Mr. Peake, you see, was an asymptomatic corona-virus patient – who had been in isolation for two and a half weeks.

The current protocol for dealing with the aged stems from initial reports from Italy and China. These indicated that the elderly are the most vulnerable to COVID-19. This assessment generated two outcomes: 1. the younger population didn’t take the disease seriously, and 2. the older was increasingly alarmed. The stressful news was compounded by political directives targeting the elderly. In Israel, grandparents were ordered to stay away from grandchildren with the admonition that hugging their grandchildren could kill them, a philosophy that has infected America. Naftali Bennet, then Israeli Defense Minister, called the directive “Operation Grandma.” His words were chilling: “We must protect grandma… [as] the deadliest connection is between a grandparent and their grandchild, between an elderly person and a young person.” Bennet’s quarantine hotels also reported suicide attempts before being shuttered.

The fear was so contagious that even non-infected older people died – they simply gave up the will to live. In April, 10,000 excess dementia deaths – not attributable to Corona- were recorded in the elderly of Great Britain and Wales – 83% more than normal. Dementia also reduces longevity in corona patients. Not surprisingly, the Corona comorbidity with the highest correlation with death or serious illness is dementia — which is then aggravated by “a lack of social contact.”

American synagogues reportedly barred elderly parishioners – supposedly for their own protection. In many cases, this practice targeted the widowed whose sole social stimulus comes from shul attendance. As lockdowns caused depression, and depression caused death, the association between COVID death and age became cemented. And as ventilators were denied oldsters, they died, and the association between age and COVID death became entrenched. And the spiral continues.

The conclusion that oldsters were more vulnerable became embedded in the international psyche and generated international policy. As a result, countries like Israel and Colombia instituted directives prolonging lockdowns for those over a certain age. In Israel, the arbitrary age was 67; in Colombia, the age-limit for lock-down was 70. In Italy, ventilators were not provided for those over 60– thereby affecting the survival rates of the older population and influencing the very statistic used to determine global policy. In other countries, it’s a bit older. 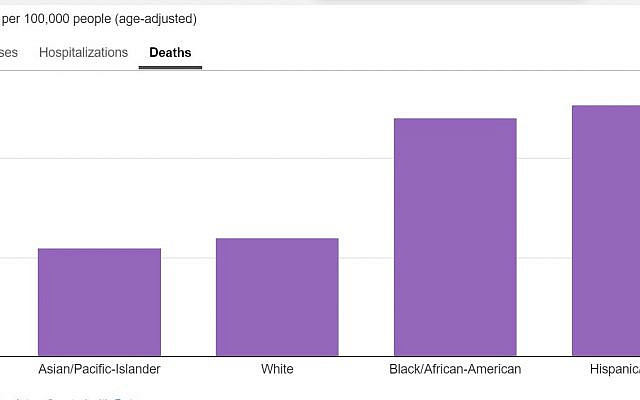 There is something very wrong with age-related ventilator and lockdown policies, even beyond the self-fulfilling prophecies that oldsters are more likely to die, even beyond the fact that the policies themselves cause increased deaths. And that’s that the conclusions from the original studies were flawed.

The Italian and Chinese studies on which these policies were based are just now being reported. (The rationale for the Italian experience was attributed to demographics registering more older people even though countries with similar demographics had better statistics (e.g., Germany and Japan). The Italian study – the larger of the two- reported results from just 22 individuals over 80. (This is larger?). The Chinese research studied only one person over 80, and just ten over 70. Based on this “robust” data, the study concluded: “[t]hese studies demonstrate that older patients have a greater risk of death from Co-Vid-19; scarce resources like ventilators should not be distributed to those above a certain age, since, by comparison, younger patients are more likely survive.”

Sure. If you don’t give the elderly ventilators when they need them – they will die. Duh. As to whether oldsters are more vulnerable to dying from Co-Vid than other diseases? No one’s looked it up. So I did. Now, Susan Collins, the Senator from Maine, claimed that seniors were responsible for 80% of all COVID deaths.” That’s not really surprising. Normally “about 82% of all deaths are people aged over 70, so the proportion of deaths due to coronavirus is much the same as the proportion of deaths overall.” The CDC concurs: Old people are more likely to die than younger people – whether or not they have pre-existing conditions. Duh.

I next checked the influenza statistics – just to get a comparison. Guess what? Older folks are responsible for 90% of flu deaths! And within that group “the most vulnerable older adults experience more than 60 times the risk of hospitalization and death [from influenza] compared to that of healthy adults aged 65 to 75 years.” Nevertheless, even though there were 80,000 flu deaths in America last year (the highest death toll in 40 years), we didn’t deprive the elderly of ventilators or lock them up.

And then we get to the comorbidity contribution to death statistics. According to several studies, co-morbidity is hugely determinative of outcome – for all ages. “At least one [sic] chronic illness was prevalent in more than 80% of all critically-ill coronavirus patients.” The Lancet confirms that this figure is similar in China, Italy, and the UK. Not surprisingly, the older population is more likely to suffer the co-morbidities most determinative of death. According to the New York City Department of Health data, out of the 13,000 deaths with known causes in those over 65, all – except five – had pre-existing conditions.

But what about the youngsters?

Of the 4300 deaths in the age group between 18 and 64 – more than 100 died who were otherwise healthy! So much for the claim that healthy elderly people are more at risk of Co-Vid death than healthy youngsters. In fact, if they are healthy, it appears that the aged are actually hardier and less susceptible to the virus, perhaps because they picked up some immunity by virtue of exposure to some related virus during their long lives. 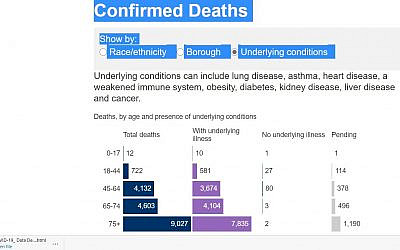 Now it is true that more elderly people died compared to younger ones, as indeed older people are more likely to have previously existing contributory conditions. But while it is tempting to ascribe these deaths to age-related comorbidities, this isn’t the entire picture. Most of these older folks were in nursing homes – and that’s where most of the deaths happened. In the U.S., deaths in senior-care centers accounted for 40% of COVID fatalities. In Sweden, it was 50%., and in Ireland, it was 62%. In Canada, 80% of the Corona deaths were in nursing homes.

Various explanations have been raised for nursing homes being mini-volcanic epicenters of disease. One is that these residences coalesce populations with multiple risk factors. But old age and illness are not the only ones. Try adding race. Now racial disparities in viral-susceptibility have been well-recognized. Some studies indicate that in the Black and Latinx populations, deaths were doubled or tripled compared to the White population. Some attribute this to higher levels of previously existing comorbidities – just like old folks, maybe?[1] (Not that we would ever dream of rationing ventilators or imposing more stringent lockdowns on the basis of race – although this population is certainly more susceptible). Not surprisingly, nursing homes with the highest levels of Black residents reported the highest levels of deaths.

But it gets worse. It appears that it’s not just race and poor physical condition that causes nursing home deaths – it’s the nursing home care, itself.: “Reports reveal that pandemic-related ageism is manifesting in under-resourced nursing homes, which, [if] left unchecked, will result in elder abuse, depression, and [hence] early mortality.”

But it gets still worse. Not only is poor care rampant in many nursing homes (and hospitals), but the “disposable oldster” phenomenon (about which I wrote in an earlier post) has in some places totally influenced medical care given to elders. Sweden actually institutionalized the “disposable oldster” approach: “Doctors overseeing nursing-home care were advised to keep their distance from residents because of infection risks and told to carefully weigh [a patient’s] condition before referring them to hospitals. [So] elderly people …[are] not taken to hospitals—they are given sedatives but not oxygen….” In other words, nursing home residents with suspected COVID-19 were placed on palliative care and given morphine and midazolam (a respiratory suppressant) “and denied … intravenous fluids and nutrition.” For many, this was a death sentence.

One geriatrician reported on doctors prescribing a “palliative cocktail” for older people homes over the telephone,” calling it active euthanasia. A nursing home nurse reported that: “People suffocated, it was horrible to watch. One patient asked me what I was giving him when I gave him the morphine injection, and I lied to him….”

The flaws in attributing excess deaths to healthy eldsters are now beginning to surface, evidenced by Singapore’s very low death rates, for starters. Doctors in the UK agree. Not surprisingly, last week, the CDC removed age, alone, as a determinant of vulnerability.

But you’d never know it from reading the Israeli headlines. One Israeli epidemiologist, routinely consulted by the Israel press, further stoked false fear and proclaimed “that will be about 4,000 or 5,000 Israelis … in the 70+ age group,” dying from COVID-19. Under the terrifying title, “Under 50s have little to fear, but even the vaccine won’t save millions of elderly”, Prof. Yehuda Carmeli reportedly said that even if a vaccine is developed “it…will not effectively protect those who are most vulnerable to COVID-19, especially the elderly.” Carmeli did not qualify these figures, either by pre-existing conditions or by nursing home residence. He merely noted that this would account for the majority of deaths he projected for Israel, which would be between 7,500-8,500. (As of this writing, in the midst of the “second wave, we are now at 324 deaths).

The trend toward oldster-disposability policies is alarming. What makes it worse, are recent academic discussions regarding prioritizing resources in case there isn’t enough to go around. Currently, the discussion is limited to ventilators, but we will face similar questions if, and when, vaccines are perfected? Currently, one vaccine manufacturer front-runner, Moderna, expects to deliver 500 million doses of vaccine a year – should their vaccine be successful. That will suffice to vaccinate less than half the population of the 37 OECD countries, which, of course, does not include Russia, China, India, a host of Far East Countries and the Arab States.

Several other companies are racing to provide human-safe vaccines by year-end. None at the vanguard includes Israeli companies (notwithstanding the hype and Israeli government cash infusion). Likely for this reason, Israel has contracted with Moderna to supply it with vaccines. As to how many vaccines? Who knows? The details have not been reported.

Likely not enough to cover the entire country. So, who will be the first to be excluded? Based on Israeli rhetoric in the papers and previous policy, us oldsters had better worry.

[1] Although, it does appear that poverty and the quality of care are also a contributing factor, with Blacks and Hispanics likely to go to less well-staffed or equipped hospitals.

For additional analysis on the ethics of rationing based on age see my post on SSRN.com: The Bioethics of CoVid Care in the Elderly: Ventilation and Vaccines