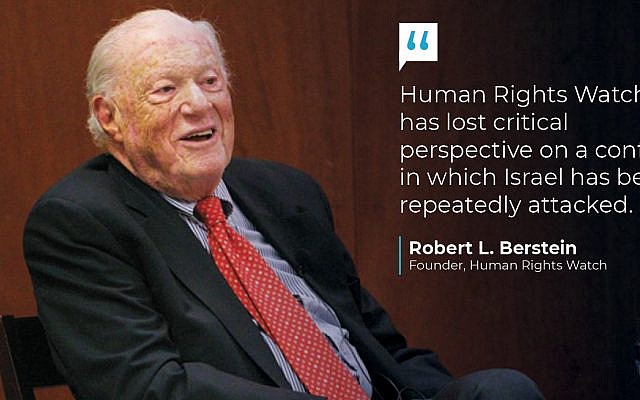 HRW Founder Robert L. Bernstein on his former organization: "Human Rights Watch has lost critical perspective on a conflict in which Israel has been repeatedly attacked".

After a fourth round of elections, Israel’s political system hinges on a small Islamist party to break an intense two-year deadlock. The United Arab List party, commonly known as Ra’am, serves as the political wing of Israel’s Islamic movement, largely representing the Arab Bedouin community that inhabits the country’s southern desert.

If the party ultimately votes in support of the “change coalition”, Israel’s next government could feature a mosaic of parliamentarians — among them, a Reform rabbi, a Muslim filmmaker, an orthodox tech entrepreneur, an LGBT advocate, and a Druze veteran — sitting around one cabinet table.

According to Human Rights Watch, this is what “Apartheid” looks like.

The organization recently released a lengthy report accusing Israel of the crimes of apartheid and persecution, distorting and cherry-picking international law to support its specious “legal” arguments — chief among them the myth that Israel’s government maintains a system of racial domination to oppress its non-Jewish minorities.

Like Canada’s, Israel’s democratic institutions are founded on the rule of law; the separation of power among executive, legislative, and judicial branches; a vigorous and free press; and the traditional mechanisms that keep a government in check. No matter their ethnic or religious background, citizens of Israel are guaranteed full equality under the law. Though robust, Israel’s democracy is not perfect, and its majority-minority dynamics leave room for improvement, not unlike our own experience here in Canada. Labeling either country as an apartheid state is a significant, even gross departure from reality.

Through its deliberate misapplication of international human rights principles, Human Rights Watch diminishes the severity of the most heinous crimes against humanity. Throughout the report, the organization dilutes the definitions of such crimes so that they can fit its agenda by broadening the definition of the key element of apartheid: a state apparatus rooted in racism and racial superiority over another race. Their watered-down definition can then be conveniently applied to any circumstance. For example, the organization points to Israel’s “Basic Laws,” – a collection of statutes amounting to a constitution — including the one that establishes Israel as “the national home of the Jewish people” — language taken directly from U.N. Resolution 181.  It omits, however, the other, equally-weighted basic laws that guarantee individual human rights. Combined, the statutes are not drastically different from the constitutions of many other democratic countries.

Human Rights Watch then uses its own definition to purport that the Israeli-Palestinian conflict is based on Israel’s desire to exert domination over the Palestinians, a premise that cannot be further from the truth. Without diminishing the complex identity politics involved, the Israeli-Palestinian conflict is most certainly not driven by an Israeli or Jewish desire for domination or by racism against Palestinians. It is a territorial dispute between two nations over a plot of land about the size of Vancouver Island.

In the report, Human Rights Watch points to what it claims is an imbalance between Israel’s security measures and the limit on Palestinian civil rights and freedom of movement. This important issue is indeed a matter of legitimate debate. Yet, here, the organization undermines its own logic by demonstrating that, even if disproportionate, Israel’s actions, are in fact security-based — and therefore not motivated by racial domination.

Glaringly, the report says almost nothing about Israel’s repeated attempts to arrive at a final-status agreement — all rejected by the Palestinians — that would peacefully end the conflict via a two-state solution. Nor does it mention Israel’s sustained willingness to make painful compromises to achieve such an agreement. Instead, Human Rights Watch adds fuel to the fire by recklessly calling on the Palestinian Authority to cease its security coordination with Israel. Doing so would empower Hamas, listed in Canada as a terrorist entity, and endanger the lives of every inhabitant of the region. In essence, the organization seeks to destabilize an already fragile environment to undermine an agreement to a future two-state solution. Successive polling has repeatedly confirmed that an agreement involving two states, living side-by-side, is the most desired outcome for both Israelis and Palestinians, as it is one that would ensure both peoples their right to national self-determination.

In 2009, Robert L. Bernstein, the founder of Human Rights Watch, warned that the organization has “lost critical perspective on a conflict in which Israel has been repeatedly attacked.” Unfortunately, more than a decade later, Human Rights Watch appears to be stuck in the dystopian reality Bernstein feared where, to advance its skewed agenda, Human Rights Watch continues to demonize Israel and torpedo future peace.

Shimon Koffler Fogel is President and CEO of the Centre for Israel and Jewish Affairs (CIJA).

About the Author
Based in Ottawa, Shimon Koffler Fogel is President and CEO of the Centre for Israel and Jewish Affairs (CIJA) - the advocacy agent of Canada's Jewish Federations.
Related Topics
Related Posts
Comments