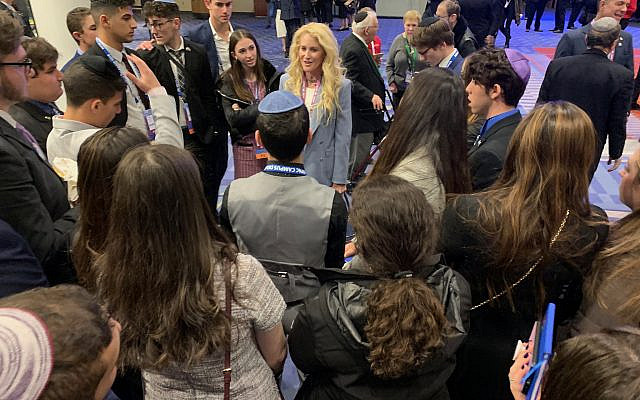 If you’re a Pro-Israel American and it’s between January and March, chances are you’ve heard the question, “So are you going to AIPAC this year?” The question refers to AIPAC’s annual Policy Conference and the expectation is that if you care about a strong US-Israel relationship, you’ll be attending the Policy Conference. The first AIPAC Policy Conference was over 25 years ago and only a few hundred people attended. The last few conferences had over 17,000 attendees per year. “Are you going to AIPAC?” has come to refer to the annual conference more than the organization.

The AIPAC Policy Conference is the largest gathering of America’s pro-Israel community. Through demonstrations of groundbreaking Israeli innovations, keynote speeches by American and Israeli leaders, inspiring moments on its large stage, and intimate educational sessions, Policy Conference delegates experience the full scale of pro-Israel activism in three powerful days. But AIPAC is much more than a conference.

The mission of AIPAC is to strengthen, protect and promote the U.S.-Israel relationship in ways that enhance the security of the United States and Israel. AIPAC’s staff and citizen activists educate decision makers about the bonds that unite the United States and Israel and how it is in America’s best interest to help ensure that the Jewish state is safe, strong and secure. With the support of AIPAC’s members nationwide, AIPAC works with Democrats and Republicans in Congress and leaders in the executive branch to protect and strengthen the U.S.-Israel relationship. AIPAC’s large support comes from the consequence of its missions and the impressiveness of its accomplishments.

AIPAC deals with consequential issues. AIPAC lobbies Congress to ensure it remains a bedrock of support for the U.S.-Israel relationship by supporting aid, helping stop Iran’s pursuit of a nuclear weapons capability, supporting Israel’s right to defend itself and reinforcing American policy that peace will only be achieved through direct negotiations. It urges representatives to continue to stand with Israel and oppose the BDS campaign, supports efforts to extend the U.N. arms embargo on Iran, and to stand with Israel as it defends itself against Palestinian terrorism. Most important, AIPAC is the only Pro-Israel organization that lobbies to make sure that America provides Israel—the sole democracy in the Middle East—with annual security assistance to help it defend itself, by itself, against mounting threats across the region.

AIPAC just announced that given the continued uncertainties created by the COVID-19 pandemic, and without a predictable avenue to safely bring together thousands of pro-Israel Americans, it has been forced to cancel its 2021 Policy Conference. While many might worry what will AIPAC be without its conference, AIPAC’s club members are the organization’s most dedicated pro-Israel supporters and will continue to support AIPAC and its mission. AIPAC’s staff, the most hard working advocates I know, will redouble their efforts. The lack of a conference will challenge them, and if anyone can rise to the challenge, AIPAC’s staff can.

I have attended the last 15 Policy Conferences and been a club member for thirteen years. I educate over 200 students on our Southern NCSY Israel Political Advocacy trip to each AIPAC conference. Even though I moved to Israel, my family has continued our AIPAC club membership for the past six years. We firmly believe in AIPAC’s mission, its board and most of all its staff. I believe that we all have a responsibility to aid Israel. AIPAC was never just a conference for us, it was the opportunity for me and my family who never served in the IDF, to play a role in ensuring Israel’s security. I look forward to continuing that commitment for many years to come. I hope you’ll join me.