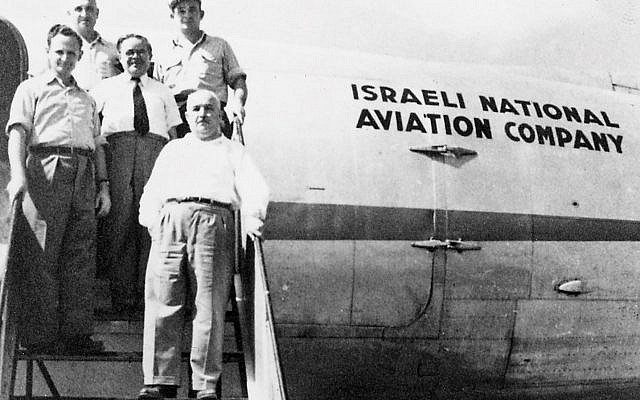 I own no stock in El Al, and yet I feel that I inherited a stake in what was once proudly regarded as a symbol of our renewed nationhood: My grandfather named it, a few months after Israel declared independence, with the war for its survival still under way.

David Remez, as minister of communications in the first Israeli cabinet, devised dozens of Hebrew terms that the revived language still lacked for 20th Century items in his purview. He had done the same for parliamentary procedure and labor relations during his previous stints as chair of the pre-state Va’ad Le’umi (national council) and secretary of the Histadrut trade-union federation. Many of his neologisms were accepted so fast and widely that not many realize today what inspired innovations they were at the time.

He may have indulged in a bit of vanity by incorporating our surname in one such invention: “traffic light” is for any Hebrew speaker “ramzor” — a portmanteau, as Alice’s Humpty Dumpty would call it, of “remez” (signal) and “or” (light). But he received no other reward for such ideas as borrowing a phrase meaning “upward” from the prophet Hosea (11:7) for the title of Israel’s fledgling flag-carrier airline. He was on hand to greet the first president, Chaim Weizmann, upon arrival on the company’s first flight in a hastily repainted Air Force transport. A year later he was on board an El Al plane to escort the casket of Zionist visionary Theodor Herzl for reinterment in the Jewish state that Herzl foresaw.

As Oliver Wendell Holmes protested when US authorities intended to scrap “Old Ironsides” (USS Constitution), among Israelis for decades, “many an eye has danced to see that banner in the sky.” Grandfather David would be heartbroken to witness this Israeli icon’s impending, unceremonious demise. But actually his heart would have been broken long ago by El Al’s ruthless privatization and subsequent tailspin.

David was a staunch social democrat as well as Zionist, a practitioner as well as proponent of cooperatives and worker-owned (or state-owned, once there was a state) industries alongside private enterprise as parts of a mixed economy. He acquired a reputation as a pragmatic conciliator who was trusted by rivals on the right regardless of this steadfast commitment. Many of the conglomerates that are now controlled by tycoons started out as such initiatives when few investors except Zionist philanthropists envisaged even a long-term return in this underdeveloped backwater, let alone a fast buck.

It has become almost axiomatic to accuse the public sector — in Prime Minister Benjamin Netanyahu’s favorite simile, “the fat man riding the scrawny one” of the private economy — of everything from inefficiency to corruption. Likewise to accuse the pre-state and early-state labor establishment of partisan favoritism and ethnic discrimination. Certainly they weren’t perfect, and contemporary satirists already had a field day with their foibles. But the simple fact is that El Al and a panoply of other essential enterprises could not have been created otherwise. And their performance in times of crisis that more than equaled today’s compares pretty well with the present owners, who are glad to pocket profits (and often to strip assets) while the sun shines. Then they expect the public purse to bail them out when losses mount — holding most Israeli pensions hostage to their now-junk bonds, since pensions too have been entrusted to the money market.

Admittedly, the slide of Israel’s Labor-dominated establishment into complacency and cronyism, especially in the euphoria that followed victory in the Six-Day War, did a lot to discredit its underlying ideology when its malaise was exposed by the Yom Kippur debacle in 1973. Afterward, the collapse of the USSR’s prostituted, tyrannized version consigned anything that could be associated with it, rightly or otherwise, to disrepute for a generation. Even the fiasco in 2008 of the other extreme — unfettered, cutthroat capitalism — has not yet restored a balance. No matter whether or not the enterprise is well-managed and pays the state annual royalties; the one-size mantra of “state bad, private good” is held to fit all. The Supreme Court blocked privatization of such basic state functions as prisons, but the overall trend continues.

Admittedly too, Netanyahu, as PM and especially before as finance minister, has been competent and effective — disastrously so, in my view — in implementing his Thatcherite policies. But when he credits this success for Israel’s relatively stable navigation of successive global crises, my thought is: that’s actually thanks to the remnant of the much-reviled welfare state and public sector that still survives despite your effort. Even in its long and intentionally starved condition, it was the public health-care system, its heroic personnel and the professional civil service (aka “deep state”) that pulled us through COVID-19. True, there were some bad exceptions, such as the handling of retirement homes and incoming passengers. But if you think a purely commercial system is more immune, look at the United States.

To its credit, privatized El Al also stepped up to the national mission of extricating Israelis who were trapped in remote locations, just as it provided vital airlifts during Israel’s past wars when other airlines cut service. But the bill was presented to the state, and if the company goes under now, who will ensure this strategic lifeline next time?

Grandfather David would be especially horrified at the state of El Al’s labor relations. These have been blamed, in part, on exorbitant demands by the workers — a controversy that I’m not qualified to adjudicate. But supposedly oversalaried state employees are a regular argument in favor of privatization with minimum-wage, untenured and unorganized labor. I do know that a present family member who was a senior but very underpaid El Al flight attendant was laid off summarily, with thousands of others. By way of looking after her family and future, she was sent home from her last flight in the same car with a colleague who, as it soon turned out, had contracted the virus — which added a farewell gift of two weeks’ quarantine.

The verse from Hosea that supplied El Al’s moniker also states (King James translation): “my people are bent to backsliding.” He really was a prophet, wasn’t he?