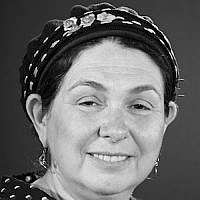 The Blogs
Robin B. Zeiger
Apply for a Blog
Please note that the posts on The Blogs are contributed by third parties. The opinions, facts and any media content in them are presented solely by the authors, and neither The Times of Israel nor its partners assume any responsibility for them. Please contact us in case of abuse. In case of abuse,
Report this post.

I must confess, at the age of 57, I am still enamored by Harry Potter. So I rushed out to buy the new play, Harry Potter and the Cursed Child. Only problem is the arrival of the book in Israel is not at all like my memories of the arrival in America with late night book parties and prominent displays of the books and incessant discussion of the themes. I arrived at the local Steimetsky to find the book sold out. Disappointed, I had to order one and wait. And no one I knew had even entertained reading it.

The play is very different than the previous books. It is a much shorter read. It is based on a story by J.K. Rowling, but developed in concert with John Tiffany and Jack Thorne.  On one hand, the brevity of the story fits better in my busy life.  But I miss the richness of the early stories.  Because it is a play there are a minimum of descriptors. Rather, it is left to the producers to add their own flavor and color to the story.  As a writer, I am a bit envious of J.K. Rowling’s ability to use words and bring a magical world to life.  I am reminded of the Brits who like to argue that their command of English is the correct one.  In the past, when I listened to a British reader telling the Harry Potter stories on tape, I had become convinced they were right.  The reader’s British accent and command of English enthralled me and drew me into the world of Hogwarts much better than the “American” dialect I had grown used to.

Why do I love the stories so much? My life is busy and serious and problem-oriented.  My inner child longs for a stage to entertain the whimsical and magical. My imagination is nurtured.   As a Jungian psychologist, I find myself drawn into this new narrative for two reasons; one more rational and one more fantastical.  On the rational side, the play is a story of the follies of parenthood. As a parent and a psychologist who works with children, I can relate.  Harry may be a wonderful, world-renowned wizard, but he fails as a father to his first born son, Albus.  Albus is what we call in Hebrew a miskan; he truly suffers at Hogwarts as a bit of a misfit.  The play is a story of Albus’ strivings to birth his own heroes’ journey.  As a Jungian, I pay great attention to the hero’s and heroine’s journey of individuation.

However, my more whimsical attraction is to the time-turner.   A time-turner is a device banned by the Ministry of Magic.  It allows the holder to travel back in time and purposefully or even unwittingly change history.  As you can guess, it can be quite dangerous to the naïve time-traveler.  I don’t want to spoil the story, but the time-turner figures prominently in the hero’s journey of Albus and his side-kick and best friend, Scorpius, the scorned son of Malfoy.  (By the way, I wonder if you can guess which house both are sorted into.)

Jungians love mythology and fantasy. Our psyche and soul desire a symbolic language to relate to the inner world. The time-turner brings me deeply to the symbolic.  For over 30 years, I have sat with patients as they often painfully journey into the wounds of their past.  Often when faced with trauma our first wish is to change and right the past. We rage and mourn and state how unfair life’s lot was to us.  Perhaps we wish for parents who were less cruel or narcissistic, or for the return of the deceased, or for a different life choice in a partner or career.

Yet, life’s path brings both good and bad. How many divorced parents would choose a different path if it meant returning their children?  How many people would exchange their parents if it meant they had married a different spouse or chosen a different career?

As an only child, I have often wished for a sibling. And although my parents were very loving, they were also very anxious and over-protective. When I was younger, I always wished for something different. Yet, I love my life’s vocation of psychology, and I am clear that I chose this path because of the failings of my childhood.

Thus, enters the world of fantasy. Humans are the only living creatures that can imagine. Chimpanzees can learn sign language and even create new sentences. Dolphins seem to communicate at a very high level.  Whales serve as midwives, helping other whales birth their pups. But only humans can imagine ahead and remember behind.  We are blessed by our Creator to create history and meaning in life.

This is what therapy and healing is about. Patients tell me their story and sometimes they rage or cry. Sometimes they find incredible solace. We share wounds and in the sharing, healing begins. And we can imagine what could have been different. But out of this imagination, a different story is created by the human soul. Sometimes a horrific story is just that, but sometimes it transforms into tremendous meaning as we look back at the whole pattern of our existence. In example, our relationship to a deceased parent can transform itself in a very positive fashion. The inner parent lives on within and thus there is the potential for change.

As a human being and a therapist, I am glad I don’t have a time-turner at my disposal. When I listen to a parent who has lost a child or a woman who has been sexually abused, I might be too tempted to hand them the banned magical device. I am glad only God has the ability to create and transform time. Instead, I will stick to reading Harry Potter and imaging. And I will stick to helping wounded souls to find meaning in life.

In the meantime, I will dream about seeing the play. I am curious how the producers create the special effects.

Dr. Robin B. Zeiger received her Ph.D. in clinical psychology in 1985 from the University of Illinois at Chicago. She is a Jungian psychologist and works in private practice as a psychotherapist and supervising psychologist. Feel free to contact her at rbzeiger@yahoo.com.

About the Author
Dr. Robin B. Zeiger is a certified Jungian analyst and free-lance writer. She works in private practice as a psychoanalyst and supervisor. She enjoys writing inspirational works amidst the beauty of her home in a small agricultural village in Central Israel.
Related Topics
Related Posts
Comments