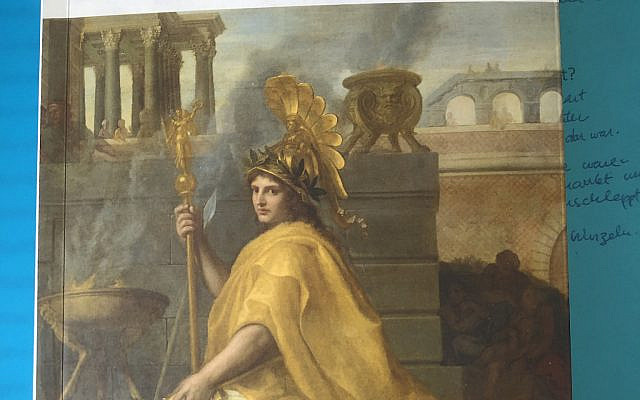 photo by Dorothea Shefer-Vanson of book cover (Entry of Alexander into Babylon , Charles Le Brun, 1665 in the Louvre Museum)

Alexander; A Novel of Utopia

This book was written in German in 1929 by the son of Thomas Mann, and with an introduction by Jean Cocteau, who was a friend of the illustrious literary family. It has been translated and provided with an English introduction by David Carter.

The character of Alexander of Macedonia, ‘Alexander the Great,’ has fascinated historians and laymen alike through the generations. In his novel Klaus Mann sought to illuminate the character of the individual who led his conquering troops across most of the known (and unknown) world of his time, in his quest to reach ‘the ends of the earth,’ providing psychological insights into his character and motives. The Freudian implications of Alexander’s resentment of his father Philip, combined with his contempt for him and his close relationship with his mother Olympias, cannot be ignored. As presented by Klaus Mann, Alexander’s zeal for conquest was directly allied with the task given to him by his mother.

The language of the book, albeit in translation, is both poetic and hyperbolic, seeking to reflect what was going on in Alexander’s mind as he and his army progressed through Egypt, the Near East and on into the ancient cultures of Babylon and Persia, which he adopted as his own. During his time in India Alexander was influenced by Indian philosophy and practices, which were resented by his Macedonian troops. Nevertheless, Alexander’s youth, energy and physical beauty brought him the loyalty of his troops as well as the allegiance of the peoples he conquered. To this day some Jewish boys are given the name Alexander, echoing the adulation afforded the conqueror by the ancient residents of Judea. And, of course, many of the cities founded by him throughout the region, most notably in Egypt, bear his name. However, after many years of fighting and conquering his troops rebelled, demanding to return home, and it was on this return journey that Alexander fell ill and died.

The novel is presumably based on ancient sources, such as records left by contemporaries, including Aristotle, who was hired by King Philip to tutor his son. However, it is essentially a poetic and emotional study of the trajectory of Alexander’s life and eventual death. Klaus Mann’s interpretation of Alexander’s quest for and attainment of power in the lands he conquered, together with his image of himself as absolute ruler, provides an insight into the workings of the mind of a being whose thirst for fresh conquests could not be slaked. In some respects this could be interpreted as an analogy for the ethos of the Germany of Mann’s time.

As an acknowledged homosexual, Klaus Mann identified with this aspect of Alexander’s character. He certainly portrays Alexander as a complex and powerful individual who, towards the end of his life appears to have become unhinged because of his mania for power. His death is portrayed in a way which would seem to be analogous with – or even presaging – the death of Jesus Christ, and if we accept it in that sense it is as if Klaus Mann has elevated Alexander to the status of a god.