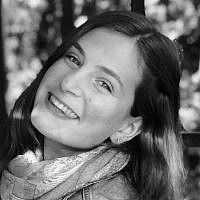 The Blogs
Rivkah Wyner
Apply for a Blog
Please note that the posts on The Blogs are contributed by third parties. The opinions, facts and any media content in them are presented solely by the authors, and neither The Times of Israel nor its partners assume any responsibility for them. Please contact us in case of abuse. In case of abuse,
Report this post.

At a traditional Pesach seder, we recite the words “b’chol dor v’dor,” which, along with the rest of the phrase, translates to, “In every generation, it is the duty of every person to consider himself as if he had come forth from Egypt.” This means that it is an obligation upon every Jew to celebrate the Exodus as if he has personally come out of the bondages of Egypt, as opposed to seeing himself as detached from this defining experience of the Jewish people. Unfortunately, it is all too easy to feel the current reality of this historical event. If we see Egypt as an external force of affliction and oppression upon the Jewish people, then the entire course of our exile can be seen as one Egypt after another. Yet, from each source of affliction, we come out victorious; we make our Exodus.

We are all familiar with the “dor v’dor” phrase, but the deep truth behind it is often overlooked. Feeling as if you had yourself come forth from Egypt is not just about identifying today’s source of affliction; it is clear that the current of antisemitism running rampant worldwide is only intensifying. Perhaps the course of the Jewish exile is not as cut and dried as one Exodus from Egypt after another, but there still is this ongoing cycle: good period, bad period, good period, bad period, and on and on. Throughout our exile, Jews have established communities in foreign countries out of necessity. They end up assimilating and greatly benefiting their residing country. However, the period of success is brought to an abrupt halt by persecution. Then, they are forced to start again somewhere new. And the cycle continues.

Perhaps the scariest thing about the Holocaust was that the Jewish people’s friends and neighbors inexplicably turned on them, isolated them, and murdered them. Suddenly, a period of economic success and cultural integration became the darkest period in Jewish history to date. Assimilation was a facade. As much as it hurts to think, the Jews’ experience in America is not so different. We have great success in America. We are proud Americans, immense economic contributors, and socially integrated. So what makes this sense of belonging any less of an illusion? How can we be so sure that this period of good won’t end in a period of bad? How can we be certain that this rise of antisemitism is not just a phase, but the early signs of an inevitable, horrible fate?

A crucial difference between today’s antisemitism and the horrors we faced throughout exile is that now we have a choice. Our ancestors had to find ways to survive in a world that did not want them. One response was assimilation. Another was isolation by creating insular Jewish communities. Neither have proven immune to further antisemitism. But, since the 20th century, we’ve had a third option: Zionism. It is not a necessity anymore to live at the mercy of another nation. We no longer have to succumb to being treated as expendable. The State of Israel is the opportunity toward which two thousand years of suffering have built — a chance to break the cycle. Israel is the opportunity to take the Jewish people’s destiny into the hands of the Jewish people, to begin working on establishing an eternal period of good.

The future of the Jewish people has been and always will be in the Land of Israel. But only through building the State of Israel can a further redemption be reached. It is clear that Israel is far from perfect — the economy is difficult to navigate, the standard of living is low, and there is corruption in the government (I mean third elections…really?). But the only way for Israel to improve is by working to improve it. This can only happen when American Jews feel that they are in exile and respond to this antisemitism with Zionist aspirations.

It is true that advocating for Israel in the US is necessary, but that is only because Israel is currently in a position in which it depends on support from America. However, we should be striving for a time when Israel will not need to depend on America, when it won’t matter whether or not the next US president wants to withdraw aid from Israel. It is not realistic for every Diaspora Jew to make Aliyah tomorrow, but the ideal should shift towards rebuilding Israel from inside Israel. Over time, this is how redemption can ultimately be achieved — through hoping, striving, and acting.

This is why I am making Aliyah next year, after graduating from high school. I’ve had the Aliyah bug since eighth grade, and spending a semester in Jerusalem during 10th grade confirmed my growing aspiration to move to Israel. I understand that it is difficult to live in Israel, but my ideological motivations make me certain in my decision and determined to carry out my conviction. Just as the early Zionists rebuilt a Jewish state with the philosophy of being the vehicle to our redemption, so too do I feel that making Aliyah is a personal, active step in fulfilling my purpose and obligation as a religious Jew. I believe more than anything else that Israel is the future of the Jewish people, and it is my mission to contribute to the fulfillment of that prophecy by making Aliyah myself, a reality I dream of actualizing one day soon. That is why I pray to move to Israel after finishing high school: for my own sake, Hashem’s sake, and for Am Yisrael.

About the Author
Rivkah Wyner, age 18, has grown up in the United States but has eagerly anticipated moving to Israel for most of her teenage years. She attends Jack M Barrack Hebrew Academy (where she is currently a Senior), a pluralistic Jewish day school outside of Philadelphia. Though raised in a traditional Conservative household, Rivkah has grown to identify with Orthodoxy. She most strongly appeals to Religious Zionist ideals and is looking forward to attending Midreshet Lindenbaum in the Fall of 2020 and going on to make Aliyah.
Comments