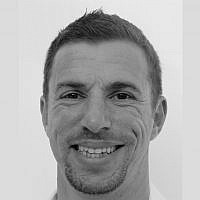 The Blogs
Neil Gillman
Apply for a Blog
Advertisement
Please note that the posts on The Blogs are contributed by third parties. The opinions, facts and any media content in them are presented solely by the authors, and neither The Times of Israel nor its partners assume any responsibility for them. Please contact us in case of abuse. In case of abuse,
Report this post.

This morning, 230 Olim from North America arrived at Ben Gurion airport on the first of this summer’s Nefesh B’Nefesh organized charter flights. The eyes of the media were fixed upon them as the rocket fire continued and the death toll on both sides rises. As a representative of the Jewish Agency for Israel, I had the honor of addressing the Olim at JFK and subsequently joining them on their journey home.

The flight was emotional with participants, professionals and invited guests aware that they were taking part in an unusual event which will be remembered due to the circumstances. The traditional welcome at Ben Gurion airport was cancelled on the orders of the Home Front command and the arrival ceremony was a muted affair. Minister of Aliyah and Absorption Sofa Landver, Jewish Agency for Israel Chair Natan Sharansky, Former Chief Rabbi Yisrael Meir Lau, MK Dov Lipman and Nefesh B’Nefesh Founder and Executive Director Rabbi Yehoshua Fass, each an Oleh with a remarkable story in their own right, addressed Israel’s newest citizens.

Naturally, this latest flight has been and will continue to be looked at from the media angle of the war but Aliyah to Israel in times of conflict is unfortunately not that unusual. I myself arrived shortly after Operation Grapes of Wrath in 1996; in 2003 instructions for new Olim were amended to include details of where to obtain a gas mask as we awaited Saddam Hussain’s chemical weapon onslaught and in 2006, flights continued to arrive during the Second Lebanon War.

War or not, the Aliyah of the 21st century is largely one of choice, involving voluntarily leaving behind a more predictable lifestyle, family and friends for a still young country with a different culture, a tongue twisting language and a multitude of other challenges. It’s a difficult and admirable decision, in most cases requiring a huge leap of faith and all the more so when large families are involved like many of today’s new Olim.

Accompanying the current round of fighting, we have borne witness to protests around the globe with a level of vitriol seldom seen before. Horrific anti-semitism, thinly disguised as protests over the way in which Israel is protecting its citizens from indiscriminate rocket fire has seen Israel’s opponents display their true colors. Many communities have already seen the way in which the wind is blowing and the riots and attacks in France will only serve to swell the record numbers of French Jews who are currently waiting in line at the Jewish Agency for Israel’s offices in Paris to have their Aliyah applications processed.

With further protests in locations including major cities across Europe and the US, many more Jews around the world may follow the French example, realizing that the only place to live a full, open and proud Jewish life is in Israel. The Law of Return ensures that the gates are always open to those who wish to join us.

Hamas may very well find itself with the unintended and unwanted legacy of assisting in increasing the numbers of Olim. If that is the case, the irony will not be lost.

About the Author
Neil Gillman grew up in the UK but fell in love with the idea of eating all his meals out of a pita when visiting Israel for the first time. His culinary tastes have since developed and he is a keen amateur cook, food blogger and shuk addict. He made Aliyah in 1996 and has been working with Olim from English speaking countries since 1999, He is currently responsible for Aliyah from English speaking countries. The views on this blog are his own.
Comments