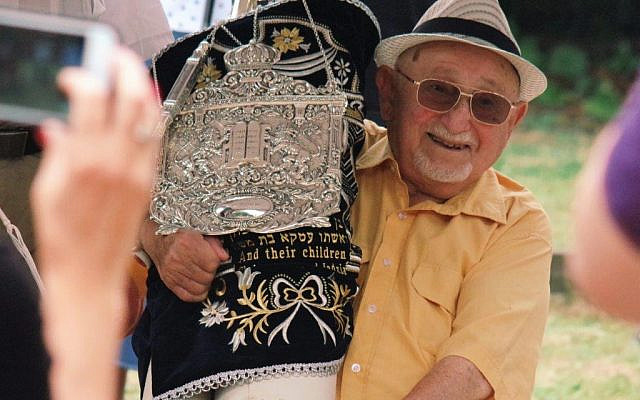 For several decades Sam Freiman sat three rows in front of me at the Richmond synagogue. A rotund man with an engaging smile and pleasant accented voice, he had time for everyone. Members could not but be aware that Sam was something very special.

As a survivor of the Shoah, the only person in his extended family to have been spared, I always felt it was a special privilege to hear Sam at the heart of festival services.

His voice, as the senior Cohen in the community, would ring out above all others during the priestly blessings.

His prayers on behalf of the congregation always seemed to me and my family – offspring of a refugee from the Holocaust who lost most of his loved ones – to be personal repudiation of Hitler’s sordid attempt to wipe out a whole people. Sam’s funeral on 18 December took place after the general election. He lived his final days, aged 93, in Nightingale House Jewish care home in south London. Alert as ever until the end, his relief that the British people with customary good sense sent Jeremy Corbyn packing would have been palpable.

I know from my own family’s back story the horrors of internment at Auschwitz and the wrecking ball of those events not just on those directly affected but on those dearest to them and, in some cases, the disturbed generation to come. Sam’s survival story was truly remarkable. Part of the tragedy of this self-made man was that for all his prayer, good deeds and charity he was pre-deceased by both his sons. There was no living relative to say kaddish, so caring members of the community stepped into the breach.

The son of Josef and Etka Freiman Sam enjoyed a happy childhood in the town of Konstancin-Jeziorna near Warsaw, until his life was turned upside down in 1939. The next six years were harrowing beyond words.

First he was interned in the Warsaw ghetto. After it fell he went on a dizzying journey which took him to Magnuszew, Kozienice ghetto, Skarzysko-Kamienna slave labour camp, Buchenwald concentration camp, Schlieben Slave labour  camp and ended up in Theresienstadt (where my own uncle Martin was also a prisoner). As an orphan in the Warsaw ghetto he had survived by sweetly singing songs for bread, earning the nickname Dundala – the title of a popular Yiddish folk song. Among those he met along his journey through the evils of Nazism was Ben Helfgott, a lifelong friend, whose son Michael delivered the Hesped at Bushey.

In 1945, after the liberation of Theresienstadt by the Russian army, Sam, along with 732 young survivors of the Shoah, was brought to Windermere by the Central British Fund and became known as ‘The Boys.’

By 1948 Sam was working in London for various companies, earning £6 a week. When he heard that a number of ‘Boys’ had decided to go to Palestine to fight in the war of Israeli independence he signed up.  He was begged not to go: “You are the only one left of your family, of your whole town. Do not risk your life. There will be no one left to bear witness.”

He went anyway and trained in Nahariya before serving on the front in the Galilee, acting as a runner to British officer Tom Derek Bowden, known as Captain Appell.

Sam was discharged from military service after 10 months. He would reminisce later that had his father lived to see him fighting for the Jewish state “he would have gone to heaven”.

Back in Britain Sam married Sonja, herself a child refugee from Vienna. Together they built a home, a business and a small property empire in south-west London. They also owned an apartment in Israel.

In the last years of his life Sam was able to tell his own history in an educational video for Holocaust Memorial Day, filmed and edited by my son Gabriel Brummer and the Bafta-winner Lewis Bronze with the support of Richmond Council.

His seat in shul might be empty, but Sam will bear witness for future generations.