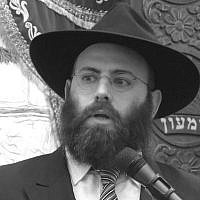 The Blogs
Menachem Margolin
Apply for a Blog
Please note that the posts on The Blogs are contributed by third parties. The opinions, facts and any media content in them are presented solely by the authors, and neither The Times of Israel nor its partners assume any responsibility for them. Please contact us in case of abuse. In case of abuse,
Report this post.

There is a thin line between aspiration and delusion.

All of us seek to encourage aspiration, but we also regard it as a duty to tell others that they are being deluded. And yet nobody in the international community is willing to have this conversation with the Palestinian Leadership. What is this delusion? It is the “all or nothing” Palestinian demands for peace.

Israelis want peace. But there is zero chance of successful negotiations with a bar set too high for Israel to accept. The bar is a return to pre- 67 borders and the ‘right of return’.

It is time to be blunt. Nobody knows better than Israel what its security needs are. Israel has made it clear that 67 borders are not defendable and would pose an existential threat to the country and its citizens. In short, it’s not going to happen.

Israel may be a young state but it has a long memory. Those who ask it to compromise its borders and security are many of the same voices who left her on her own during wars when her needs were greatest. It will not compromise security for promises and words.

On the ‘right to return’ the bluntness must continue. The Palestinians are not only demanding a smaller Israeli State, and a Palestinian state free of Jews, but for the absorption of millions of Palestinians into Israel.

In short, Israel would simply cease to be a Jewish State – the world’s only one. It’s not going to happen.

Let’s keep it even more simple: A future Palestinian State can have the luxury of malleable borders, Israel cannot.

This is the reality. The Palestinians demands are not credible or achievable. And yet the international community continues to pay lip-service to their delusion.

This is a dereliction of duty. We need to rip up the current playbook that the international community is sticking to. It is a playbook that has not advanced the prospects of peace by a single millimetre. It enables Palestinian stasis. It removes any motivation for them to move forwards. It keeps them in their comfort zone of perpetual grievance.

The Trump plan on the other hand represents the first real attempt by any negotiators to understand and put Israeli security as the starting position and build from there. Previous attempts have always made this an afterthought.

The plan also offers Palestinians a real pathway to statehood, underpinned with a 50 billion investment in infrastructure and state-building – around a third, in today’s money – of the entire Marshall plan budget that was given to 16 countries.

The Palestinians rejected it.

Why? The official line is because of annexation, and because they lost trust in Trump.

Let’s take annexation first. In the past, and most recently in Gaza, but also including the return of Sinai and other territory, Israel has shown its willingness to trade land for Peace as long as it can safeguard its security. And there is no reason to believe that this would not be the case again. Annexation does not represent a final settling of borders. It can represent an opportunity for Palestinians to get back round the table, even if they are historically averse to doing so.

Which brings us to the issue of trust. The Peace process to date is a litany of failure to budge on the Palestinian side, even after significant and often painful moves by Israel, such as the withdrawal from territories that we just touched upon.

Their reaction to this plan is more of the same. The refusal to Trump is the same refusal given to Carter, Reagan, Bush, Clinton, Obama. The same refusal of 48, 67, 73, in the 80’s, 90’s, and OO’s. The terms of reference only change.

Which takes us back to where we started. Aspiration and delusion. A Palestinian state in an aspiration. 67 lines and the right to return is delusion. Annexation is not a final settling of borders, but can be part of negotiations.

It is time to get serious. To get real. To disavow delusion and face reality.

If we fail to do this, we will never get the Palestinians back around the negotiating table, allowing them to perpetuate ad-infinitum the suffering of the people that they represent.

And It’s time for the international community to finally choose between the two and get things moving again.

Rabbi Menachem is the Chairman of the European Jewish Association, one of Europe’s largest and most significant advocacy groups representing jewish communities across the continent. The EJA is based in Brussels, Belgium.