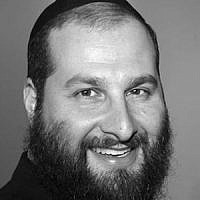 The Blogs
Yossi Marrus
Apply for a Blog
Please note that the posts on The Blogs are contributed by third parties. The opinions, facts and any media content in them are presented solely by the authors, and neither The Times of Israel nor its partners assume any responsibility for them. Please contact us in case of abuse. In case of abuse,
Report this post.

“All you need is love” are the lyrics to one of the famous Beatles songs. This song was originally sung in 1967 as part of the anti-war movement in the United States during the Vietnam War.

I would like to provide an entirely different and perhaps more spiritual take on the words “all you need is love”.

My wife and I just returned from staffing a Taglit-Birthright trip through Mayanot Israel, one of the leaders (and most wonderful) in bringing thousands of young Jews to Israel. Our group, composed of thirty-six Americans, and seven Israeli soldiers, couldn’t have been more eclectic. Add in the bus driver, an Israeli Arab, our medic, a young man from Indian descent, our tour guide, an American Oleh (made Aliya many years ago), and us, a Chabad rabbi & rebbitzin from San Antonio, Texas. Our group ranged from a nineteen year-old female, Israeli soldier to a twenty seven year old American dentist. Just about every job-field, interest and background and affiliation was represented. And then there was us, the “ultra-orthodox” couple, Jewish educators, some twenty years older than most participants.

Some days into the birthright trip, my wife and I were given the names Papa Bear and Mama Bear. At first I was amused and found it silly. But as the nickname spread and at the end of the trip we received a notebook with handwritten letters from each participant, I realized something much more profound. It was about love.

So many in the organized Jewish world bemoan the fate of today’s young American Jews. “They are out of touch, disconnected, not interested, and lost” the critics say. While I am no expert on generational trends within the Jewish community or a prophet who knows the future, I do have a thought or two about this issue. Firstly, I too, am very concerned about the future of the Jewish people. I too, worry about assimilation and apathy among young Jews. As a Jewish educator for twenty years, I have seen the joys and oys of our global Jewish community. That being said, I have a suggestion for the leaders and doomsday prophets of our time. Go spend ten days with these very Jews of whom you speak. Spend ten days with them in our Holy Land, schvitzing, singing, laughing, crying, sharing, learning, questioning and exploring. I can only say that I have changed as a result of the two trips I have staffed. My wife, somewhat skeptical when I returned so inspired last year, has now joined the tribe after her first trip.

Many years ago in the 60’s when the winds of change blew through this country, the Lubavitcher Rebbe-Rabbi Menachem M. Schnnerson of blessed memory shared his view on young Jews of that era. “They are deeply spiritual and they want meaning” the Rebbe explained. “They want unfiltered truth-Torat Emet” he preached. “Reach out to every one with Ahavat Yisrael – unconditional love, and you will see how precious these souls are”. With that teaching and challenge, the first Chabad House was opened at UCLA in California,

Today we may have different challenges and battles than then. We may be more sophisticated and have technologies and smartphone apps that they never dreamed of. But I maintain, people are people, emotions are emotions, and the Jewish Neshamah-Soul is all the same.

During this period of the Jewish calendar from the 17th of Tamuz until after the 9th of Av, also called the “three-weeks”, we focus on the infighting and senseless hatred that led to the destruction of our holy temple in Jerusalem. Our sages remind us that instead of blaming others, we ought to look inward, and see how we can treat others with more love and respect.

Perhaps, just perhaps, our polls would look a bit different, if we could incorporate these lessons into every Jewish organization, synagogue and school.

Treat people with love, unconditional love, nonjudgmental love, and teach, teach, teach our Torah of truth, and you will be shocked. These millennial Jews are so wonderful and profound.

The bond we shared was special. The respect and love they showed us was intense. I hope and pray that we merit to be called Papa and Mama Bear for many years to come.

About the Author
Yossi Marrus resides in San Antonio, Texas with his wife and six children where he has been active in the rabbinic and educational field for the last twenty years.
Comments