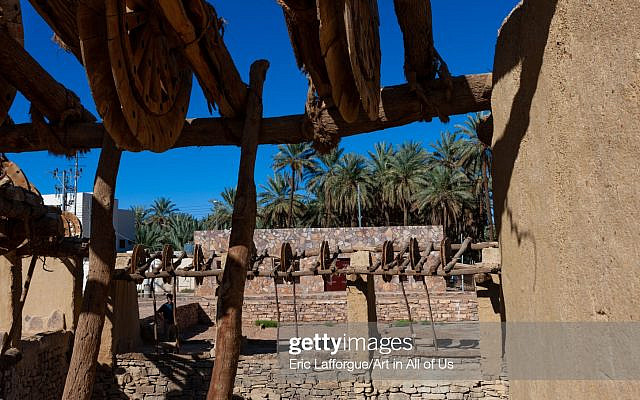 Ancient well in the desert.

In Parshas Chayei Sarah, Avraham Avinu entrusts his faithful steward Eliezer with going to his brother Nahor’s family in Paddan Aram to find a wife for Yitzhak. While as a general principle one is not permitted to test Hashem, the Art Scroll Chumash cites Ran, Chullin 95b to the effect that since Eliezer is looking to verify the girl’s qualifications, not for omens, the test is permissible.

And what is the test? Eliezer waits by the well outside town to find a girl who is modest and humble enough to draw the water herself, not by sending a maid, and who will offer to draw for his camels as well as for him without being asked. No sooner does he propose the test than Rivka appears and passes with flying colors.
The commentators tell us that because Avraham provided water for the angels who came to him at the beginning of Parshas Vayera to wash their feet, Hashem rewarded the Jewish People with Miriam’s well that followed them in the wilderness for forty years. (And Avraham personally making a feast for them was repaid with the rain of manna in the wilderness, etc.)

But between those two events there are others that involve shidduchim being made at a well. Besides the match between Yitzhak and Rivka, Yaakov meets Rachel at the same well when Yitzhak sends him to Rivka’s family to find a wife [Parshas Vayeitzei]. Moshe Rabbeinu meets Tziporah at a well in Midian when he flees from Pharaoh [Parshas Shemos.]

As we know, the Torah doesn’t use unnecessary verbiage or recount insignificant incidents. Thus when a similar event occurs three times, we can be sure that an important point (or points) is being made. The Stone Edition Art Scroll Chumash, in a footnote to Bereishis 29:1-12 [Parshas Vayeitzei] summarizes several symbolic meanings for a well: “… as the stories of Abraham and Isaac have shown, wells were important in symbolic ways. Commentators note that wisdom is symbolized by the water below the ground; it is buried and hidden, but it is accessible to those who understand that it is vital to life and worthy of the intense effort needed to bring it to the surface. Women, too, represent wisdom: Wisdom of women builds her home [Proverbs 14:1)], as when Abraham hesitated to send away Hagar and Ishmael at Sarah’s insistence and God told him to do everything she asked of him [ibid. 21:12)]. It is understandable, therefore, that the human symbols of wisdom were associated with the earthly symbols of wisdom.”

As I was reminded by Rabbi Avraham Shemesh, some of these themes appear in our Friday night zemer Eishes Chayil, which on its surface is a praise of righteous women that a husband sings to his wife, but in a deeper sense the commentators agree that it is allegorical – “it is variously interpreted as a reference to the Shechinah, the Sabbath, the Torah, wisdom, and the soul.” [Art Scroll Siddur p. 358]
Of particular note is the pasuk, “Pihah pascho v’chochmah, v’soras chesed al lashonah,” which the Art Scroll Siddur translates as “She opens her mouth with wisdom, and a lesson of kindness is on her tongue.” If we change the pronunciation of “sof” to “tof,” as Israelis and Sephardim do (Ashkenazim, insert a dot in the space inside the letter), we get “Toras chesed al lashonah.” The juxtaposition of Torah and wisdom in the same pasuk is no accident. After all, doesn’t the Torah reflect the infinite Wisdom of Hashem? And if further convincing is needed, consider this excerpt from Moshe Rabbeinu’s farewell address:

“See, I have taught you decrees and ordinances as Hashem, my God, has commanded me to do so in the midst of the Land to which you come, to possess it. You shall safeguard and perform them, for it is your wisdom and discernment in the eyes of the peoples, who shall hear all these decrees and who shall say, ‘Surely a wise and discerning people is this great nation!’ For which is a great nation that has a God Who is close to it, as is Hashem, our God, whenever we call to Him? And which is a great nation that has righteous decrees and ordinances, such as this entire Torah that I place before you this day?” [Devarim 4:5-8]

Now that we have made these connections, we can trace our way back to the well. These three special shidduchim are made at a well because, again as the commentators tell us, water (mayim) is repeatedly used to symbolize the Torah. [Bava Kamma 17a] Water, along with air, is the most essential ingredient for our physical life. It is a known fact that people can survive longer without food than without water. Likewise, Torah is the most essential ingredient for our spiritual life. Without Torah, it is all too easy for us to get off track.

We can elaborate even farther. The “marriage” between Hashem and B’nei Yisrael through Torah parallels the marriage on Earth between two neshamas (male and female; sorry, Supreme Court, we answer to a Higher Authority). This view is reinforced by the observation of many commentators that each of the first five of the Ten Commandments dealing with the relationship between man and Hashem has a parallel among the second five dealing with the relationship between man and man. The parallel to the commandment not to commit adultery is the commandment not to commit idolatry. In other words, worshipping gentile deities constitutes being unfaithful to the marriage bond between Hakodosh Boruch Hu and the Jewish people. And we can regard the Torah as the ketubah for that marriage.

For an exposition of Jewish views on marriage that is too lengthy to record here, please see Esther PIiekarski, “The Ten Commandments of Marriage,” https://www.chabad.org/theJewishWoman/article_cdo/aid/389345/jewish/The-Ten-Commandments-of-Marriage.htm