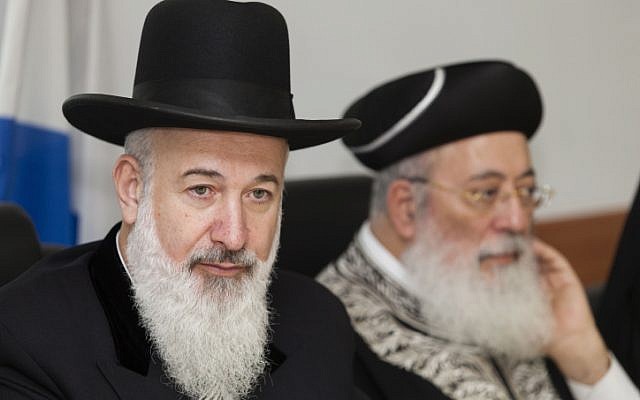 “One can see that divorce recalcitrance does not happen by just one gender, and the numbers of men who are refused a divorce is higher than the number of women,” Rabbi Shimon Yaakobi, director of the Rabbinical Courts Administration.

As readers of this blog know, I write about the plight of agunot often. “Agunah” is the term that halacha, Jewish law, uses to describe a Jewish woman chained to a dead marriage. It is well known that there are thousands of agunot around the world waiting for their husbands to grant them a get, or religious divorce, without which they cannot remarry within the framework of Jewish law.

Numerous organizations exist in Israel, the US and worldwide, that represent these women in their efforts to win freedom from the men they entrusted with their lives. As Jewish law currently works, the man has the power to withhold the get and make demands in exchange for granting it.

Men are also trapped in marriages by women who refuse to accept a get. While the consequences for a man denied a get are not as dire as those for women, it is just as unacceptable to keep men in unwanted marriages.

But for the Chief Rabbinate to claim that more women are trapping their husbands than the other way around is not only ridiculous, but adds insult to injury and abdicates rabbinic responsibility.

According to these statistics, 12% more of get-refusers are women.

These numbers are stunning. They are also groundbreaking, as the Chief Rabbinate has proven that there are more women who are refusing divorce than men.

The most crucial thing to understand — the crux of this issue — is that the Chief Rabbinate’s statistics do not represent men and women who have denied their spouse a divorce.

Rather, these statistics represent people who have refused to comply with the beit din’s order to divorce their spouse.

What is the difference? In a word, it’s YUGE.

In order for a beit din to declare someone a get-refuser, it must first order a divorce and have that order refused. To order the divorce, the judges must be convinced that the spouse requesting the divorce has the right to receive it.

In general, this is far easier for a man to show, since according to halacha, it is his prerogative to end the marriage. It is much harder for a woman requesting a divorce to obtain the court’s approval.

Therefore, a woman whose husband refuses to divorce her is not considered an agunah until and unless the court mandates that he do so.

Even if he has refused for years.
Even if he beats her.
Even if he molests her daughter.
Specifically, the beit din does not consider the following women agunot:

S., who is being refused a divorce by a man who was sentenced to prison for beating her. The court refused her request for a divorce because, in the court’s words, “her husband only beat her because she asked for a divorce, and he promises not to do it again.” Since the court did not order a divorce, S. is not an agunah.

N., who asked for a divorce from the man who was molesting their daughter. The court denied her request because “he only abused your daughter, not you, so your divorce claim is not legitimate.” So, while N.’s husband is denying her a divorce, the beit din never ordered him to grant it, — so the Chief Rabbinate does not count N. as an agunah or her husband a get-refuser.

Since the husband has the halachic power to grant or deny the get, the beit din will almost always prefer an arrangement to which the husband consents instead of ordering him to divorce his wife — even if that agreement includes extortion, bribery, or forcing the wife to relinquish her rights.

My cousin, K., was abused by her husband. She wanted a divorce. Her husband refused to grant her one for years. When she took him to beit din, expecting them to order him to release her, the judges told her to “pay him lest he kill you.” She fought as long as she could, but to no avail. In her desperation to be free of him and the debts he was accumulating in her name (since there is no civil divorce in Israel, she could be free of him and his debt legally only by obtaining a religious divorce), she was forced to borrow hundreds of thousands of dollars to pay him off. This is called extortion.

The Chief Rabbinate did not consider K. an agunah or her husband a get-refuser. Neither one appears in the beit din’s statistics.

Who else is not considered an agunah?

Any woman whose husband has not been ordered to give a get by the beit din — no matter how long she has been waiting.

My friend, A., waited for seven years while the beit din heard her husband agree to give a get… if she paid him tens of thousands of dollars that she did not have. They let him leave the country. He never came back. The beit din does not consider A. an agunah.

The hundreds of women who have given up hope after five, ten, forty, and even sixty years of being refused a get by men who have fled, are extorting them, have remarried, or simply refuse to show up in court — are not considered agunot.

The women who cannot keep their beit din files open are not considered agunot. In order to keep a file open in the beit din, the litigant must pay a fee every few months. The beit din will close the file of a woman who has given up hope of ever receiving her get, or who cannot afford the fee to keep the file open. So women who have waited decades for a get but are unable or unwilling to pay the fee are not counted as agunot, and their husbands are not counted as refusers.

The women who refuse to be extorted or give away their rights in exchange for a court-ordered get are not counted as agunot. For example, the woman whose husband sat in jail for get refusal, but was then released and said he would grant the get for 800,000 shekels, is not considered an agunah. The judges wrote that the woman was “chaining herself” by not paying the money.

And don’t forget the thousands of women who submit to get extortion by giving up their money, property rights, or child support in order to win their freedom. My friend L. agreed to all of her husband’s demands: no alimony, a pittance of child support (based on his falsified income records), and difficult custody arrangements, because he threatened to withhold her get forever if she did not.

The problem of agunot is real.

Instead of presenting us with alternative facts and half-truths, like the pig who tries to prove he is kosher by showing off his split hooves, the beit din needs to be honest and recognize that the system itself is a major cause of aginut, and that it does not fulfill its mandate to enable people to end marriages with as little pain as possible.

By defining an agunah exclusively on its own terms, the beit din leaves out — in fact, abandons — the thousands of Jewish women chained in dead marriages. By worrying more about its own reputation instead of the lives of those it is meant to protect and defend, the Chief Rabbinate betrays the values it is meant to uphold, and the people and Torah who entrusted them with that role.