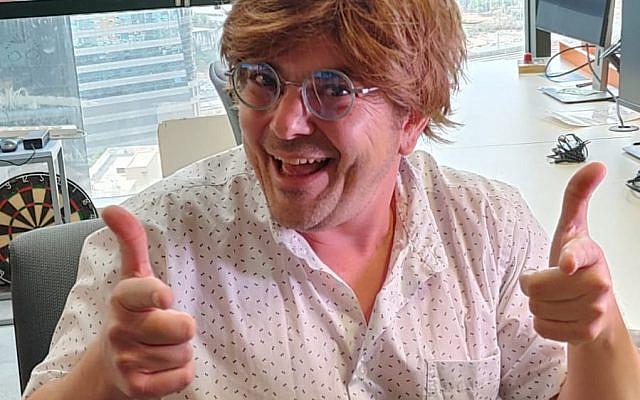 One of my favorite sayings in Hebrew translates (loosely) as, “The owner has lost his (or her) mind!”

I suspect it was more popular in the ’80s, when mental health jokes were as acceptable as ones about Georgians, fatsos, and blondes, but you can still hear it occasionally today.

The phrase refers to a blow-out sale in which the prices are so low, and the profit margin so slim, that the owner of an establishment running this type of sale seems to have lost their mind for considering it good business. It does, however, give the consumer a false sense that they’re not freiers (suckers), all the while taking advantage of this mentally unfit owner. Ethics aside, it’s a heck of a marketing tactic because no one, absolutely no one, wants to be a freier.

My wife says it’s my button-down shirts. Everyone sees me wearing them and they charge me more.

Some people say it’s my name. They just hear my name and charge me double.

Others say it’s my “American-ness,” an unenviable mix of personal space, courtesy and manners that often triggers Israelis and causes a price hike on whatever I’m inquiring about.

But I suspect my freierness goes much, much deeper than those trivialities. So deep, in fact, that it’s almost out of my control.

I’m paying for more but getting less at the supermarket!

The owner really has lost his (or her) mind! No one will go back to Shufersal, Yohananof or Rami Levy if the prices… ah, shit. I forgot. It’s all a monopoly of five companies (Osem, Coca Cola, Strauss, Unilever, etc.) that basically run out the competition and fix prices. I have a choice, but it’s a Henry Ford choice: I can have any color I want, as long as it’s red Bamba by Osem (5 for 21 shekels!).

Silly me. I’m forgetting about the time, not so long ago, perhaps (possibly even 2016?), when there was an actual human person helping you bag your groceries. No, that position no longer exists in most places. I wonder what happened to those baggers? I’m sure their exorbitant minimum wage salaries were cut for the overall health of the company.

Oh wait, you have a cashier? Most supermarkets today have reduced staff and replaced them with automated scanning machines. Now I’m actually working for the supermarket, scanning the items, bagging them myself (paying for the bags, too) and, by the looks of it, paying more for the same items.

Staffing shortages have wreaked havoc on any attempt to get anything done or go anywhere. Like travel.

If you’ve tried to renew your passport lately you’ve surely noticed the 3 – 6 month wait time required to get an appointment in the Ministry of Interior. But you’re nobody’s fool. You look up appointments in other cities and finally decide that Kiryat Shmona isn’t that far away and so you pack up the family for a fun day of renewing passports. In Kiryat Shmona.

When you get to the airport you realize that there aren’t nearly enough people working there to handle the line snaking all the way to Netanya. And even if you did make it on time to your flight, chances are your suitcase won’t. Or, as I experienced on a recent trip to The Netherlands, instead of one bag, I got 3,000 smaller pieces of one. Thanks EasyJet!

OR, you can self check in prior to the flight, print out the stickers, ask yourself security questions, learn how to fly the plane, serve yourself an overpriced bottle of water from the skymall and land it. Voila!

Work is harder and I’m doing more of it for less pay!

The Start-Up Nation, famous for billion dollar unicorns like Waze and Mobileye, has all but dried up. The global recession has halted investments in startups and forced many bloated companies to get in shape via mass layoffs.

If you’re in the high-tech sector you’ve most likely been let go OR you’ve had to watch helplessly as they let your colleagues go. These positions will not be filled in the short term (or, let’s face it, in the long term) since you’ll be asked to take on MORE responsibility for the same pay.

You should be relieved that you’re still employed during this global recession. That’s what they tell you as they pile on the work. But look around. It’s actually worse than you think.

Now that coronavirus is over, it is time to head back to the office. That’s more time commuting and less time with your family. Even though you don’t understand why they insist on bringing you back to the office (when the company posted record profits during wfh — work-from-home) you’re a team player (and let’s face it, lucky not to have been fired AND, bonus, your electric bill is pricier) so you agree, but only because you can’t afford to run the a/c at home.

Turns out gas is also more expensive. Thanks Joe!

Public transportation is unreliable. Staff shortages, wear and tear and strategic cost cutting decisions on routes have made taking a bus an adventure. I’ve been on buses with severe air conditioner leaks, busted doors and, yes, even an engine failure. I also suspect that there are more people in each bus (my theory is that fewer buses are being dispatched to cut costs)  which makes each one a superspreader of coronavirus.

But when you do make it into the office, just make sure to smile and hustle hustle hustle… you don’t want management to think you’re quiet quitting…

If it’s not the fifth national election in four years, the horrors of war from Ukraine, monkeypox, and accelerated global warming…

It’s the realization that despite all my hard work…

And all the shekels I’ve scrounged by eating in, buying second-hand clothes and living in a tiny apartment in little Bukhara…

I’ll never own a house, a decent car or even be able to afford a family vacation without going into serious debt.

I wish I had a clever suggestion on how to improve things here in Israel.

Maybe I just need to accept the harsh truth…

that for as long as I live here in this country…

I’ll always be a freier.

About the Author
Jason Fredric Gilbert is a film and music video director, published author and acclaimed parallel parker; His Independent Film,"'The Coat Room" won "Best in Fest" at the 2006 Portland Underground Film Festival. He is also the author of two books of screenplays, "Miss Carriage House" and the follow up collection of screenplays "Reclining Nude & The Spirit of Enterprise" He currently lives in Or Yehuda and solves crossword puzzles in the bathroom. Please slap him in the face if you see him.
Related Topics
Related Posts