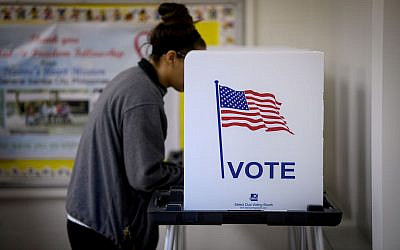 More than any other political measure, campaign giving signifies a particular level of intensity and commitment. The 2017 Pew Study on American Political Giving affirms that more Americans than ever are financially supporting their party’s candidates.[1]

In this analysis, the role of Jewish political giving is examined in some detail. As we would expect, Jewish support for political parties and candidates or specific issues and causes reflects a heightened level of participation.  I have noted elsewhere that Jewish political activism has intensified over the past five years with the accelerated funding of political causes and candidates serving as one such outcome.[2] Indeed, there are many motivating factors, among them the personal passion associated with political causes and candidates and a sense of communal, civic obligation. During this particular era, there is clearly an expanded degree of political activism.

As this writer has noted elsewhere:[3]

Either conscious or unconsciously Jewish voters have a particular desire to blend in, to be “American”! This is an abiding behavioral characteristic for many voters, and most certainly for minority cultures operating in a democratic society.

Politics represents an extension of who we are.  All of the social forces acting upon us serve to define our political outlook. Within the Jewish political context, we know that religious affiliation, ethnic orientation, generational status, and one’s urban-suburban status are all key influencers in shaping both voting patterns and political giving. Voters ask different questions when making political choices and in thinking about their options. Jewish political behavior extends beyond the act of voting often encompassing campaign giving, attending rallies, preparing opinion pieces, and signing petitions.

For some of us, our self-interests politics, our nationalism involves an alignment of our Judaism with our Americanism.  Patriotism encompasses an abiding belief that being a “loyal American” is joined with one’s Jewish identity. For these political actors, a central question:

“Is it good for the Jews?” These players are often defined as “identity voters” and articulate their politics through their self-interests as Jewish Americans. Their political identity begins with whom they are, as it represents an extension of themselves.  In turn, they translate their love of Israel as an extension of their American patriotism. Their political identity is reflected in the interplay of this dual connection.

For these activists, Israel is an extension of their American story.  For this voting sector, Judaism frames their political identity and supports their civic behavior and beliefs. For others, Israel has specifically replaced their religious identity. The Jewish State serves to reinforce their political orientation and most certainly their specific and unique passion to view Israel’s political wellbeing as part of their Americanism.

For these “Jewish patriots” they see the left has more dangerous to the interests of the United States and Israel than extremists on the right.  Criticism of Israel, for example, as expressed by political adversaries on the left, be they Jews or non-Jews, is clearly seen as potentially problematic, undermining the case for Israel and ultimately, the security and viability of the Jewish State. They view certain forms of dissent as not only anti-Semitic but in some cases identify such political assertions as “unpatriotic”.

A second cohort of Jewish Americans draws its political identity from a different relationship and reading of how they connect their Judaism in relationship with their Americanism. While they generally hold to the notion that support for Israel reinforces their overall conservative political orientation.

Their politics begin with a defined political philosophy involving small government, a heightened regard for Constitutionalism, and an abiding belief in capitalism, among other political principles. In some cases, these “Jewish Conservatives” critique Democrats as misreading the principles of liberalism, and more directly, the roles and responsibilities of government. Along with their fellow Conservatives, they hold personal liberties and religious freedoms to be profoundly important to their understanding of American values. It is important to note that a number of deeply-embedded “red state” Jewish voters held profound differences with Donald Trump both on policy matters and in connection with the President’s performance style. As such, these “Never-Trump Republicans” parked themselves outside of the Party in 2016 and again in 2020, unwilling to lend their support.

“Universal” Jewish Voters: This group’s liberal instincts, supported by their connection with and belief in the prophetic tradition, inform and nurture their activism as well as their political orientation. Similar to their counterparts, their center-left liberalism is uniquely aligned with their understanding of Judaism. Their abiding question: “Is it good for America, for my community?” These voters frame their political agenda from the outside-in. In turn, the case for Israel is framed in association with their broader American view of the world. Whereas “identity” Jewish voters begin with the particular, these liberal activists operate from a broader or universal perspective.

Capturing Jewish political behavior at times maybe compared to “herding cats!” as Jews are so deeply embedded in the American political environment, where their individual values and personal stories weigh deeply in defining and shaping their particular inclinations and passions.

As we have come to understand in connection with political giving, ideology drives social behavior. Historian Gil Troy affirms that liberal Jews are proudly American, despite perceptions that Jews vote for Jewish interests,  “American Jews are more pro-choice than pro-Israel when voting.”[4]

Troy adds:“The degree to which liberalism and liberal ideas has been good for the Jews in America helps explain why so many American Jews think liberalism and Judaism are the same.”

This same motivation can be applied to the act of political giving. As most studies confirm the more connected Jews are to their own community, its institutions and causes, they exhibit a higher degree of giving not only to these communal priorities but also exhibit a high degree of commitment in supporting secular and political activities.[5]

The study … analyzed the giving patterns of the 33 Jews who made the 2016 Forbes 400 list of the richest Americans, concluding that on average only 11 percent of their giving was directed to Jewish charities, for this sector the majority of their contributions supported secular causes.

The impetus for Jewish giving is aligned with two factors, education and wealth. As we note from a number of studies, Jews are among the wealthiest and most educated constituencies.

“American Jews have an average of 13 years of schooling, the highest for a US religious community. And 44 percent belong to households with annual incomes of $100,000 or more, the most for any major ethno-religious community.”[6]

Another finding, surprising to some: “Age is not a driving factor in whether someone engages in charitable giving, but the evidence does suggest that age affects whether someone gives to a Jewish organization.[7] As we note from Pew and other studies, there is a higher degree of alignment among older Jews with Jewish communal institutions and the causes, Israel among them, that they most readily identify as core to sustaining Jewish identity.[8]

Giving USA reported that Jewish household donate annually on average $2,526 to charities, by comparison, their Protestant counterparts give 1,749, while  Catholic households contribute $1,142.[9]

According to Connected to Give, a larger percentage of Jews give to charitable causes than households of other faiths. Some 76 percent of American Jews gave to charity in 2012, compared with 63 percent of Americans who observe other religions or are not religious. The same study also found that Jews, black Protestants, Evangelical Protestants, mainline Protestants and Roman Catholics give at similar levels to religious institutions and to other causes. Jews, on the other hand, give relatively less to congregations and more to other causes.[10]

Indeed, Jewish charitable giving practices have altered over time, as described by Hanna Shul Bar Nissim of the Cohen Center at Brandeis.[11]

…The proportion of Jewish institutional giving to Israeli causes has fallen since 2009. I believe that several factors, including demographic and social changes, a diminishing perception of Israel as being in need and concerns over the Palestinian-Israeli conflict have probably been driving this decline for years.

More recently, Israel’s increasingly conservative policies on social and religious issues, which are often at odds with what most American Jews support, might also be playing a role.

The share of charitable donations from U.S. Jewish grant-making institutions that support causes in Israel declined from 14 percent to 9 percent while giving to Jewish causes outside Israel rose from 14 percent to 32 percent in the same period.[12] This data is confirmed by other studies that point to a declining level of attachment to Israel, among young Jews and a growing disengagement with particular governmental policies of the Jewish State.

In 2012, as an example, 71 percent of the $160 million that Jewish donors gave to the two major-party nominees went to President Obama’s re-election campaign; 29 percent was directed to Mitt Romney’s presidential bid, according to an analysis of campaign contributors, employing a predictive model to estimate which donors are Jewish based on their names and other characteristics. This ratio of support mirrors how Jewish voters cast their ballots in 2012.[13]

Maybe the most impressive statistic: 50% of all campaign dollars donated to the Democratic Party are from Jewish funders, while 25% of donations to the Republican Party are provided by Jewish contributors. Take as an example, among the top 50 donors to the 2016 campaign, 11 of the top 14 Democratic Party contributors were Jewish, while 9 of the top 36 Republican supporters identified as Jews.[14]

The high-end Jewish political donors play a profoundly important role in national political campaigns. This is borne out by a Times of Israel report identifying the 25 largest contributors of whom 15 are Jewish.[15] The five most significant Jewish political supporters are posted below, based on this September 2020 analysis:

There are other forms of Jewish giving, including the use of PAC monies. Open Secrets, for example, reported that in 2018 there were some 20 PAC’s (Political Action Committee) supporting pro-Israel candidates. In that year some $15 million in financial support was delivered to candidates. In that report, $9.6 million were directed to Democrats, while Republican candidates and office holders received $5.3 million. J Street PAC, with resources exceeding $4.2 million directed entirely to Democratic Party candidates, and NorPAC providing nearly $1.9 million in contributions, with 65% earmarked to the Democrats, represented the largest two PAC operations.[16]

Monitoring the patterns of political giving patterns will be an increasingly important indicator when studying levels of Jewish activism, not only involving distinctively ethnic-religious priorities but also general liberal politics.