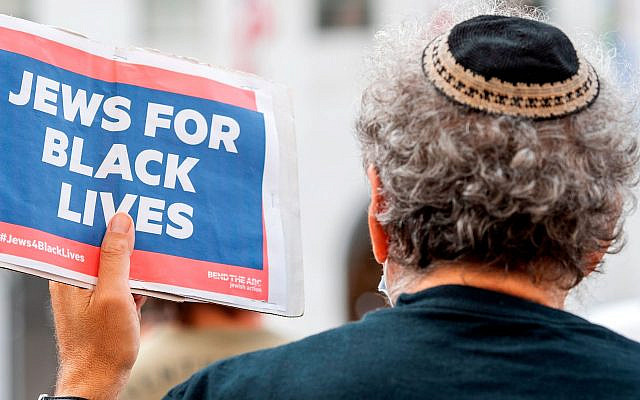 A kippah-clad man holds a sign reading 'Jews for Black Lives' at the weekly Black Lives Matter 'Jackie Lacey Must Go!' protest in front of the Hall of Justice in Los Angeles, September 9, 2020. (Valerie Macon/AFP via Getty Images)

Whoopi Goldberg offended many American Jews by saying “The Holocaust isn’t about race,” but rather about “man’s inhumanity to man.” The problem is not what Whoopi said, it’s how the Jews of America didn’t see this coming.

Anyone willing to learn a little history knows that the Nazis considered the Jews a race and sought to wipe that race off the face of earth. Were Whoopi a more educated person she would have known that already.

Whoopi has bought into Critical Race Theory, a neo-Marxist movement that says that all minorities are oppressed and therefore need to unite to revolt against their white oppressors. They do this through insisting that whites apologize and take responsibility for crimes that some of their ancestors committed and by deciding who is an oppressed person and who is an oppressor. Blacks, for example,  are oppressed. Jews are not.

From Whoopi’s point of view, Jews are white and Nazis are white. If whites murdered whites that’s “man’s inhumanity to man” but it “isn’t about race.”

Another reason is that after decades and billions of dollars spent on “Holocaust education” it’s now clear that it was a waste of time and money. All of the grand Holocaust museums and memorials did not influence people’s views of Jews. In part because the universal slogan chosen to remember the Holocaust—“Never Again.”

A more meaningful message would have been “Never Again to the Jews.” Never again will we allow a Holocaust to happen to the Jews. But that’s too particular for most Jews in America who want to be universal. They prefer to focus on everyone’s suffering, not just their own. That’s why so many Jews and even Holocaust museums supported Black Lives Matter, an organization that states clearly on its official Twitter account:

Black Lives Matter stands in solidarity with Palestinians. We are a movement committed to ending settler colonialism in all forms and will continue to advocate for Palestinian liberation. (always have. And always will be). #freepalestine

By wholeheartedly supporting groups like Black Lives Matter, Jews have taken away support for themselves and now they are seeing the results.

When I asked Professor Ruth Wisse on my podcast, Jewish People & Ideas, why Jews would  support groups that are against them, she explained it like this:

“As anti-Semitism began to be anti-Zionism […] Jews began to say, as they said in the 19th century, if only the Jews would shave their beards, and if only they would dress like others, and if only they would talk like others, there would be no anti-Semitism. Instead of saying that, they now say, if only Israel would pull back to these borders, if only Israel would do this for the Palestinians, that ‘if only’ is going to be the response of a great many Jews, depending on how intense the war against them becomes.”

American Jews ask themselves, if we Jews supported Blacks going back to the original Civil Rights movement, how could it be that one of the most influential black voices in America, Whoopi Goldberg—a woman who chose a Jewish sounding stage name—could say something so offensive to Jews?

Although many Jews support Blacks, many Blacks don’t support Jews. American Jews who want to believe in their universal message, now have a hard time accepting this particular reality.

There were many Jews in the past who experienced the same shock from other groups that they supported, but that didn’t support them. Such as the Jews that were murdered by the Nazis who considered them a different race.

Already decades before the Holocaust, some Jews knew that no matter how assimilated they were, Jews would never be accepted. Some of those who survived are the Jews who gave their lives to establish the modern state of Israel, a country where you can be any kind of Jew you want without worrying about what the non-Jews think or say about you.

By supporting groups and people that will never support you, American Jews not only eroded their support base, they eliminated the justness of their cause. Why should anyone support the Jews when the Jews support people that could care less about them?

What Whoopi said was ignorant. It’s really not such a big deal. What is a big deal is that American Jews didn’t see this coming, even though it has been decades in the making and perhaps without realizing it they have been some of its biggest supporters.