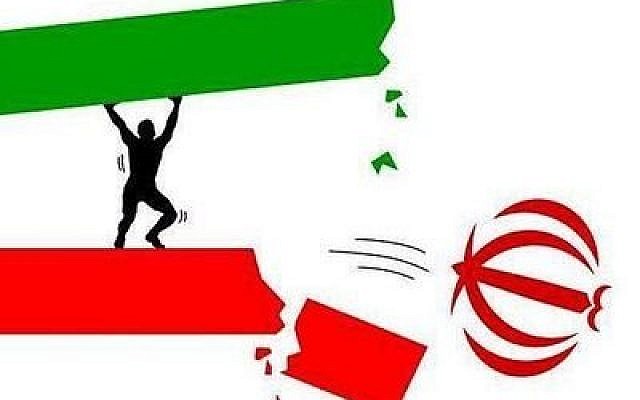 Almost four years ago a large segment of Ashkenazi Jewish leaders and activists across America came out in strong support of the Obama administration’s Iran Deal based on the belief that the deal would “help improve the lives of the people of Iran” who were suffering economically and help “bring about reform in Iran for average Iranians”. As a result of the deal, billions of dollars in free money and sanctions relief were given to the Iranian regime by the U.S. and Europe. Many of these Jews not only vocally supported the Iran Deal, but also labeled many of us Jews in the country who opposed the deal, Ashkenazi and Mizrahi alike, as “warmongers” and against finding a “peaceful diplomatic solution” to the crisis with Iran. Today we see the Iranian regime has spent every penny of the billions in free cash from Obama on their foreign wars– and with the ayatollahs and their thugs lining their own pockets with the money while average Iranians are living in utter poverty. The American Jewish community has always stood in support of freedom and socialist justice movements in America and overseas. Today with the utter failure of the Iran Deal, the time has come for American Jewry to stand with the freedom loving people of Iran and support regime change in that country.

In early 2018, thousands of Iranians peacefully protested in nearly two dozen Iranian cities against their repressive Islamic regime and since then have partaken in countless individual acts of defiance against the radical Islamic regime oppressing them every day since then. Social media photos and video posts from average Iranians living in Iran reveal the violent oppression people in Iran face at the hands of their tyrannical regime, shortages of water in the country, dilapidated infrastructure in the country, a the lack of basic foods in Iran and lack of salaries owed to workers of state-run companies. Today we have seen that the 2015 Obama Iran Deal clearly did nothing to help the people of Iran economically nor provide them with any improvement in their daily lives. The corrupt ayatollahs in Iran who made the deal have instead spent the billions for their own personal benefit or to fund their foreign wars fought by terrorist groups. The clerics in Iran have moreover killed, beaten and imprisoned these innocent peaceful protestors who only want better economic opportunities, a free society and a democratic representative government that is answerable to them. Therefore with the current events unfolding in Iran today, the same Ashkenazi Jews in America who supported the Iran Deal, today have a responsibility to now stand in solidarity with the people of Iran seeking regime change on their own terms in Iran.

As an Iranian American Jew I will be the first to admit that I was vehemently against the 2015 Iran Deal and whole-hardheartedly support the protestors in Iran today because my family along with thousands of other Iranian Jews experienced the anti-Semitism and pure Satanic evil of this Islamic regime in Iran which forced us to flee that country nearly four decades ago. Yet I call on the Ashkenazi American Jewish community who has long been strong proponents of social justice causes, equality and freedom movements to support the people of Iran that today are fighting to rid themselves of an oppressive regime. During the Cold War was it not American Jewry who were among the most vocal against the tyranny of the former Soviet Union toward Russian and Eastern European Jews? Were American Jewish leaders not the amongst the most fierce opponents of the Soviet Communist regime which oppressed millions?  Were American Jews not among those who stood with Polish Solidarity union activists during their protest against the Communist Polish regime? Were American Jews not among the many that stood shoulder to shoulder with Nelson Mandela and his freedom movement against the apartheid system in South Africa? Did Rabbi Abraham Joshua Heschel and other American Jewish activists not march arm in arm with Dr. Martin Luther King Jr. during the Civil Right Movement? And even today, many American Jewish congregations have even taken on the cause of “Tikkun Olam” or healing the world through their volunteerism in their own neighborhoods and to parts of Africa. Therefore it is imperative that this long and proud tradition of support for real social justice movements must continue and be carried forward by American Jews for the plight of average Iranian citizens seeking greater freedoms in their country and better economic opportunities despite the repression they have faced from their oppressive radical Islamic regime.

We as Jews in America whose families for centuries endured horrific oppression, pogroms and even genocide, cannot and we must not remain silent and on the side lines while innocent men, women and even children are beaten and slaughtered in the streets of Iranian cities just for protesting against a repressive regime in Iran. We cannot remain silent while this totalitarian Iranian regime that has done nothing to improve their lives of average Iranians but instead spent their country’s vast wealth on funding terrorist groups and proxy wars throughout the Middle East. Supporting the protestors in the streets of Iran who want regime change in their country, is not merely to the ultimate benefit of America and Israel’s security, but more importantly it is the right and moral thing to do. After all do we as Jews not read the Torah every year in the book of Deuteronomy in Parashat Shoftim which states “justice, justice shall you pursue”? As a people who for millennia have faced unspeakable violence, hatred, injustice, pogroms and even genocide, we have always spoken out in every part of the world in support of those who were downtrodden and oppressed. The only solution for Iran’s population is supporting their aspirations for freedom and true democracy with a new government free of the ayatollahs’ tyranny. Iran’s freedom loving population needs our moral and political support in their defiant acts of non-violence and protest to overthrow this radical oppressive Islamic regime which has destroyed their country for the last 40 years.

Today our support of the peace-loving people of Iran would be no different and essential at this juncture in time. Last year leaders and individuals throughout Israel came out voicing support for average Iranians protesting for better lives on the streets of Iran. Likewise L.A.’s Simon Wiesenthal Center last year was among the first national Jewish organizations to also voice support for the Iranian protestors. And even if the Iranian ayatollahs and military apparatus ruling Iran may claim our support for the average Iranian protesters is a part of some “great American or Zionist conspiracy” to bring down their regime, we must stand steadfast with those Iranians seeking a democratic representative government in their country. How much longer can we stand idle and not speak up while the regime in Iran not only slaughters and imprisons its own citizens, but whose leaders constantly deny the Holocaust and call for a second annihilation against our brethren living in Israel?

More importantly for Jews and non-Jews who love peace and abhor war, standing in solidarity with the people of Iran protesting today is a moral and just thing to support because it avoids unnecessary conflict between nations when the people of Iran will eventually overthrow their country’s oppressive leaders. We as American Jews, Ashkenazi and Mizrahi, conservative and liberal, secular and religious, have a duty to speak with one voice for freedom and in support of those innocents in Iran who want to liberate their own country from a repressive regime. We as American Jews must today recall the gift of freedom the ancient Persian king, Cyrus the Great granted us from the bondage of Babylonian captivity and in turn stand with his descendants in Iran who today are seeking the world’s support to free themselves from their own yoke of radical Islamic bondage and oppression.