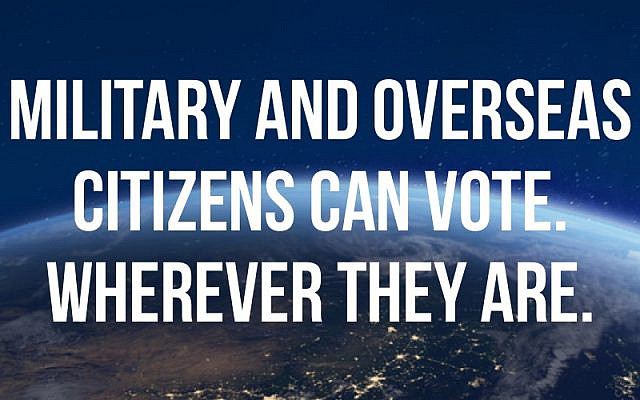 Yet, according to FVAP 2020 Report to Congress there was an estimated 7.8 percent voting turnout among eligible overseas citizens which is significantly lower than the 79.2 percent of

domestic voters. Countries with the highest numbers of voting-age US citizens are Canada, the United Kingdom, Israel, France, and Australia.

Israel might be the 3rd country outside of America where Americans live; yet only 5% voted.

Over the years overseas voters have claimed that their overseas ballot doesn’t count until all domestic ballots have been counted. Rather than listen to the rumors, the best source is to hear directly from election officials who count your ballot!

“I want to assure overseas voters that all eligible voters who return their ballots within the timeframe established by law will have their ballots counted. There is a persistent myth among absentee voters that your vote will only count if “it is close”. Nothing could be further from the truth. All ballots issued to eligible voters, which are returned timely, are counted. Every vote counts. Prior to becoming New York’s chief election official, I served as a County Commissioner and experienced many tight votes. One race was decided by two absentee votes, so I have firsthand experience!“ Kristen Zebrowski Stavisky, Chief Election Official, New York State, Co-Executive Director, New York State Board of Elections

From the most populated state in the nation, California Secretary of State Elections Division commented, “This is a common myth about vote-by-mail ballots that we appreciate you trying to dispel! All timely received ballots are processed and counted. Under California law, vote-by-mail ballots can begin to be processed by county elections officials starting 29 days before the election and are typically the first ballot results to be posted on Election Night. Counties continue to process vote-by-mail ballots postmarked by Election Day, and received no later than 7 days after the election, throughout the canvass period.”

Voting from overseas is very difficult because I don’t have time to go to the Embassy. The good news is you don’t have to go to the Embassy to vote. If you have a computer, you can request your absentee ballot using the Federal Post Card Application (FPCA). All the instruction for your state will be provided. Each state has their own voting laws.  Some allow ballots returned by email, fax, or online; while others by international mail.

Don’t know who to vote for?

“Someone Struggled for your right to vote.  Use it.” Susan B. Anthony

Information about candidates is provided “During the petition filing period, we have a list of who filed on our website. As we get closer to the election, voters are able to access our voter lookup, which contains poll site information, elected officials, and sample ballots with all candidates listed. The local county websites also have petition information and sample ballots. Most publish a list of candidates as well.” Kristen Zebrowski Stavisky, Chief Election Official, New York State, Co-Executive Director, New York State Board of Elections Per California Sec of State’s office, “a state Voter Information Guide is available on the Secretary of State’s website approximately 80 days before each statewide election in PDF format at www.sos.ca.gov/elections, and an HTML version is available approximately 60 days before the election at https://voterguide.sos.ca.gov. County voter information guides may be found on county elections officials websites. A list of county elections officials contact information, including their websites, can be found on our website at: https://www.sos.ca.gov/elections/voting-resources/county-elections-offices.”

“Once a state reaches their candidate filing deadline, we reach out to the state to provide the list of candidates and then we upload them to our portal for voters to access.” Federal Voting Assistance Program

“I moved to Israel as a child and don’t feel it’s right.” Rachel. When I asked if she had a US Passport and Social Security Card, I was told “of course”.  It is understandable having the feelings but she is still connected to the US and told me she would be unhappy if Congress, Senate, or the President took away her US Passport. Not all countries allow dual citizenship.

If you are receiving social security ~ YOU SHOULD VOTE

If you are receiving child tax credit ~ YOU SHOULD VOTE

Ready to vote?  ~ It’s not really that difficult! State primaries are now in progress.

Register and request your ballot by your state’s primary deadline. You can use FVAP’s easy online assistant to walk you through each section of the form. Request your ballot to be emailed. After you finish filling out the Federal Post Card Application (FPCA), print it, sign it, and send it to your election office. Most states accept the FPCA by email or fax while some require it by mail. Check your state-specific guidelines at FVAP.gov.

Followup to make sure your ballot request was accepted and you are registered.

Ballots are mailed to military and overseas citizens no later than forty-five (45) days before each election. Once you receive your requested email absentee ballot, vote and return it as soon as you get it. Remember to carefully follow the instructions, especially if a “security envelope” is required, and sign the package as indicated when returning it. To save time, send voted ballots electronically if allowed by state law. Voters can check if their state accepts completed absentee ballots by email, fax, or via an online portal at FVAP.gov/guide.

If a requested ballot has not arrived, no need to panic. Use the Federal Write-in Absentee Ballot (FWAB) immediately. It works like a backup ballot. If your official absentee ballot arrives after sending in the FWAB, complete and send in the official ballot, too. Only one will be counted.

Still need help or have questions? These organizations are ready and willing to help ~  Federal Voting Assistance Program, National Association of Secretary of States, Democrats Abroad, and Republicans Overseas

“The ballot is stronger than the bullet.” Abraham Lincoln